To add a little more magic to this holiday season on Temple Square, Broadway's Cinderella will join the Mormon Tabernacle Choir for their annual Christmas concert.

Thursday morning Laura Osnes was announced on The Doug Wright Show as the guest performer for the annual holiday event. Laura Osnes, who starred in Rodgers and Hammerstein’s Cinderella on Broadway, joined the Mormon Tabernacle Choir for their Pioneer Day concert earlier this year. Her return to the conference center is a dream come true for all those who will participate in the concert, and will surely make for a fairytale-like event.

Osnes got her start on Broadway after winning the role of Sandy on a TV show, Grease: You're the One That I Want. Since then, her career has taken off and she received nominations for two Tony Awards for her roles in Bonnie and Clyde and Cinderella.

Joining Osnes on stage is British actor Martin Jarvis, who appeared as Sir Cosmo Duff Gordon in the multi-Oscar-winning Titanic and lent his vocal talents to Disney’s Wreck-It Ralph.

"This is going to be an unforgettable concert,” said Ron Jarrett, president of the Mormon Tabernacle Choir. “Where else can you find such a depth of talent in all performing disciplines all on one stage? We are truly blessed to have this fabulous ensemble of artists spend Christmas with us.”

The Mormon Tabernacle Christmas Concert will be on Friday, December 18, and Saturday, December 19. You can request tickets, beginning October 24, here.

Watch Laura Osnes sing with the Mormon Tabernacle Choir and discuss her family and faith below. 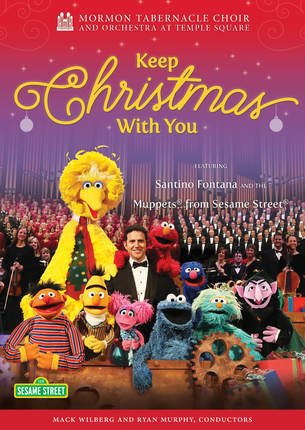 For more Christmas magic, own last year's holiday concert for yourself. Watch as the Muppets® from Sesame Street® take over the conference center in this classic performance your whole family is sure to love! Order it now at deseretbook.com.