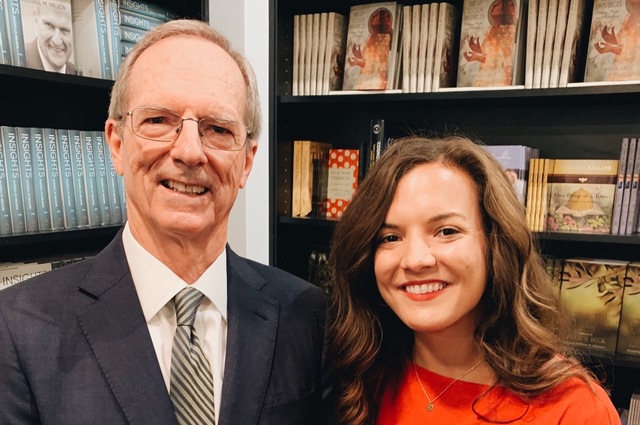 In Tad R. Callister’s new book, A Case for the Book of Mormon, the former Sunday School general president and beloved Latter-day Saint author shares not only the evidence for the Book of Mormon but he also lays out arguments made by those who oppose the book. For readers, this may come as a surprise from a book that intends to build a case supporting the veracity of the Book of Mormon as it may even be the first time some readers have heard certain arguments against the book but during his conversation with All In host Morgan Jones, Callister explained why stating the case of opposition was necessary before making his own case in defense of the truthfulness of the Book of Mormon.

Listen to the entire episode here or in the player below.

Morgan Jones: As I read, I was impressed because you raise some of these, these critical—I don't know if I should call them attacks—things that people have raised as opposition to the Book of Mormon. And as I read, I thought, I don't know that we've ever looked at the Book of Mormon, I haven't, quite like this. And I'm curious for you, Brother Callister. Did you have any concerns about presenting arguments against the Book of Mormon that some reading the book may not have even been aware of before reading.

Tad Callister: That's a very fair question and a good question. And I did have some concerns but they were overcome by a couple of factors. One is that we live in a day of the Internet. And these questions were available, these attacks are available. And most people are going to hear them one way or another. They'll hear them from a friend or someone who's not a friend, or they're going to see them when they read on the internet. Or their kids are going to have these questions or their friends are going to have these questions. And I thought true faith, as the Lord said, is know the truth, and the truth will make you free. And I think the more you understand the opposition, and the more you have responses to it, or you have the spiritual faith to endure some questions that may not be answered, it's a way to strengthen testimonies, not weaken testimonies. And I think it was Peter who said, "Be ready always to give an answer to every man that asketh you a reason of the hope that is in you," but how can you give answers if you haven't paid the price to find out what their questions are, and their attacks are? And so hopefully this will strengthen testimonies and immunize people against some of these attacks that may come in the future. And they'll say, "Oh, yeah, I've heard that question. And I know the answer, or I'm contented with my own spiritual response at this point."

Later in the interview, Elder Callister provided examples of some of the opposition included in his book as well as the defense he would make against those claims.

MJ: I'd like to, if it's okay with you, I'd like to give people a little taste of some of what is found in this book. So I'm curious, what would you say is one of the more compelling arguments against the Book of Mormon that you present in the book? And can you give listeners an idea of how you would argue against that in support of the Book of Mormon?

TC: Well, I think one of the arguments that the critics felt was compelling for years and years is that the Book of Mormon had many anachronisms, meaning something that was out of time, out of place, out of context. For example: Their argument now is that the Book of Mormon mentions horses, but we don't have evidence of horses in that time frame or oxen or sheep or silk or steel or iron. That's one of their key arguments.

TC: Exactly right. And now, what they also failed to tell you is not only that many of these people, the real archaeologists today tell you, it's less than one tenth of 1 percent. But they also fail to tell you is, this same argument was made about metal plates. And then all of a sudden, metal plates were discovered. And then the same argument was made about the Book of Mormon mentions cement but there's been no cement found. But now cement has been found. The same argument was made that Alma was a woman's name and the Book of Mormon puts it out as a man's name. And then we discovered it was a man's name. And then that there was no barley. It's mentioned three times at least in the Book of Mormon, there was no domesticated barley in that time, and now we've discovered barley. And so I would say one of their arguments that they felt was a strong argument, over the passage of time and when the whole truth is known, is a very weak argument now.

MJ: That was so interesting to hear. It made me think the first person to join the church in my family was a woman named Mary Jane Hodges and she joined the church in North Carolina. And the missionaries knocked on her door and they shared the Book of Mormon with her and she read it and she loved it so much, she was pregnant at the time and she loved Alma so much that she said, regardless of whether it was a boy or girl, she was going to name her baby Alma. Turned out, it was a girl but Alma can be a boy or a girl's name, just like Morgan can be a boy or a girl's name.

TC: Well, in fact, they finally found a deed in 1961 in Israel. It was about the first century, around the first century, I forgot if it was BC or AD but it was during Book of Mormon times, and it was signed by Alma ben Yehuda, which means Alma, the son of Judah. So that was a proof that Alma at that point in time was also a boy's name.

You can find A Case for the Book of Mormon here.