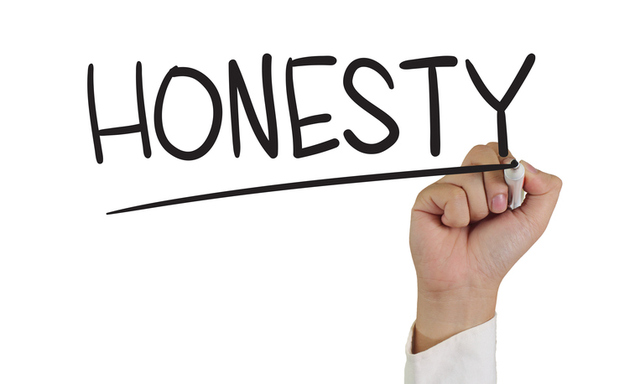 Teachings of Howard W. Hunter Lesson 18: "We Believe in Being Honest"

This lesson was one of those eye-opening experiences that changed how I look at myself and how I think about God. I always knew I was supposed to be honest, as in don’t cheat and steal, but I never thought of honesty as being a foundational characteristic of deity. Without complete and total honesty, we cannot become perfect.

The lesson opens with an example of President Hunter’s exacting honesty. He bought and paid for 10 pieces of penny candy on a vacation. As the group drove down the road and passed around the candy, he discovered that he had accidentally miscounted and had taken 11 pieces of candy, not 10. Even with the possibility that they would miss the tour they were headed for, he turned the car around and drove back to the store and paid for that extra piece of penny candy he had taken.

Many of us would not have worried about it. It was, after all, only a penny. But it was a matter of principle to President Hunter. He would have known that he had been dishonest if he had kept that piece of candy and not returned it or paid for it. His personal integrity would not allow even the smallest breach in his honesty and reputation, even if he was the only one who knew about it.

Can the Lord lie to one of us, but tell the truth to another one of us and be called trustworthy? Can He purposely misguide us, even a tiny bit, but still be called truthful? Can the Lord make a promise today and not honor it at any point in the future and still deserve our trust? Is it possible for us to exercise the faith necessary to become exalted if the person in whom we are placing our trust is ever fickle and changes his mind midstream?

I hope you answered all the questions in the last paragraph with a resounding “No!” Complete honesty is a principle of exaltation. Look at President Hunter’s example with the penny candy. Many of us would have just shrugged it off as something not worthy of our time or attention to fix. But to the exactingly honest person, there was no question but that the mistake needed to be remedied. This is a good example of what it means to be constantly repenting. He saw that he had made an error and he was willing to accept the consequences for the mistake and do what was required to fix it, no matter how small the mistake appeared to be.

Exacting honesty is what sets a completely trustworthy person apart from someone of questionable character. We all know someone who promises a good game, but when it comes to fulfilling their promises they are short on delivery. We hopefully have all met at least one person in our life who quietly but effectively keeps every promise they make. If they say they will be there at a such and such time, they are. If they are not, you know it is because even with them trying to move heaven and earth to do what they said they would do, they were still prevented from being there.

We cannot put our faith in someone who is not completely honest. We have to know that complete and unfailing honesty and fidelity is part of God’s nature. If we cannot trust Him to keep his promises, then we will not be able to trust him when our lives feel like they are spiraling out of control. We absolutely must be able to believe that His promises truly are “sure.”

For us to become like our Savior and our Father in Heaven, we must learn to be just as exacting in our personal integrity. For example, some would consider picking and choosing between the rules of the road to be a small matter—something of little consequence. The Lord has told us to obey the laws of the land. Did he say we got to choose which laws of the land we were to obey? Did he say that we have the right to live some and not others?

Can I say I am obeying the laws of the land if I choose to ignore the double yellow line or the solid white line on the road? What about those of us who have decided to set our own personal speed limits instead of adhering to those set by the government? If we feel we should be able to pick and choose which laws of the land we obey, does that mean we can be justified in choosing which parts of the laws of God we obey?

Can I be considered temple worthy if I obey the Word of Wisdom, but don’t obey the law of tithing? What if I am obeying all the commandments, but I am criticizing the prophet or the Brethren?

Please don’t get me wrong here. I’m not saying that we have to be perfect to attend the temple. But I am saying that we can’t believe we are perfect or whole until we are perfectly obedient. And even then we will be making mistakes that will require constant repentance, just like President Hunter in the penny candy example.

The temptations of evil surround us on every side. Without the protection of integrity, we are at the mercy of all kinds of sin and wrongdoings.

President Hunter talks about Job from the Old Testament. He uses Job’s integrity to demonstrate the power of honesty and integrity has in helping a person through their trials in life.

Because of his strength, he had no concerns for the trivial temptations before which most people fall. Job had built into his own life a strength and satisfaction that Satan himself could not crash. It is also interesting to see how God was delighted with him: “There is none like him in the earth, a perfect and an upright man, one that feareth God, and escheweth evil[,] and still he holdeth fast his integrity” (Job 2:3).

To eschew means to shun or avoid. It was because Job shunned and avoided sin in any form and in any degree that he had the strength to pass unscathed through his terrible ordeal. This was the source of his strength, the basis for his own goodness.

Honesty is an oft overlooked part of the cornerstone of building our perfect world. Every good attribute depends on honesty to exist. Without complete and full honesty in every aspect of our lives, we will never fully develop integrity or be able to experience true charity.

Our honesty is an evolving attribute. We cannot be perfectly honest today. But with diligence and perseverance, and constant practice, we can grow into one who is perfectly honest. To the degree that we learn to be completely honest our happiness will grow as well. I will close this week with a quote from President Hunter.