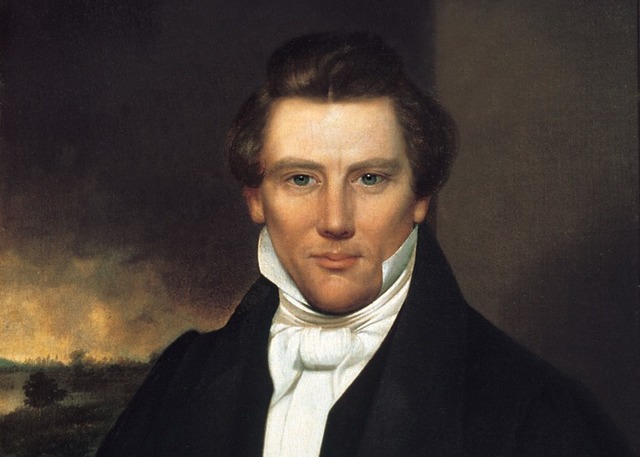 It is a difficult thing to compare ourselves to the greatness of someone like Joseph Smith. He was a man with little formal education who accomplished things of such importance in his short lifetime that it boggles the mind. Yet, if we are commanded to follow the example of the Savior of the world, surely we can liken lessons learned from the Prophet Joseph’s life to our own. Let’s look what President Hunter says about Joseph Smith and see how we can apply some of those same attributes in our lives.

Our Time and Season

Acts 17:26 is only part of a sentence, but it shows us that the Lord has given each of us a time and a season to be on earth. He has determined before we came here our sphere of influence, and where we would live.

And hath made of one blood all nations of men for to dwell on all the face of the earth, and hath determined the times before appointed, and the bounds of their habitation;

Each of us were given abilities (gifts) that are meant to bless our lives and the lives of those with whom we come into contact. Joseph Smith was richly blessed with spiritual abilities. He had a great work to accomplish and all his gifts would be required to fulfill the work the Lord foreordained for him to accomplish.

Joseph didn’t know how long he had when he started the work of the restoration, but he gave his all to whatever responsibility the Lord called him to perform. President Hunter says this about Joseph’s faithfulness to the work to which he was called.

“The responsibility I feel for the work the Prophet Joseph inaugurated fills me with a determination to do all I can in the time and season allotted to me. Surely Joseph was faithful and true to his time and season!”

President Hunter stated in the previous quote that just as Joseph was faithful and true to his time and season, his faithfulness filled President Hunter with a determination to be faithful to his own time and season on earth. None of us knows how long we have. We are not told who needs to feel our love and influence for good. The Lord leaves that up to us to pursue as we are influenced by the Holy Spirit. But we will all someday answer for how we spent our time here. We will all have to give an accounting of the opportunities we were given to do good, and how we responded to those chances to bless the lives of others.

Are We Faithful to What We Know?

Joseph Smith was given knowledge that no one else on earth possessed at that time. He had a personal experience that surpassed what normal folk, like us, will likely ever experience. But the knowledge he received, though spectacular in its delivery through a personal visitation, is still available to each and every one of us through the gift of the Holy Ghost.

"Joseph Smith, could testify of his own positive knowledge that God lives, that Jesus is the Christ, the Son of God, a Resurrected Being, separate and distinct from the Father. He did not testify as to what he believed or what he or others thought or conjectured, but of what he knew. This knowledge came to him because God the Father and the Son appeared to him in person and spoke to him. ...

When men heard that young Joseph Smith was claiming God had manifested Himself to the boy, they mocked him and turned away from him, just as in the Christian era wise and able men in Athens turned away from a singular man ministering in their midst. Yet the fact remains that Paul, in that earlier experience, was the only man in that great city of learning who knew that a person may pass through the portals of death and live."

Just as Paul walked among the scholars and wise of his day, possessing knowledge none of them could even conceive of, so too do we walk among the people of this world with knowledge that is beyond the understanding of those who have not received the witnesses of the Spirit we have enjoyed.

Are we true to what we know? Our neighbors cannot be saved in ignorance any more than we can. Are we hoarding our knowledge of Christ and his gospel or are we being true to that testimony which requires that we reach out to those who have no knowledge of the true nature of God? Are we seeking their salvation as Christ would or are we being selfish, for whatever reason, and withholding the blessings and joys of eternity from our brothers and sisters around us? This is a personal question each of us must answer for ourselves.

God Cherishes Those Who are Weak

Notice in the following quote from the lesson what President Hunter says made Joseph and the first members of the Church great.

"Joseph Smith was not only a great man, but he was an inspired servant of the Lord, a prophet of God. His greatness consists in one thing—the truthfulness of his declaration that he saw the Father and the Son and that he responded to the reality of that divine revelation. ...

I testify that the boy prophet, who in so many ways remains the central miracle … of this church’s experience, is living proof that, within God’s hands and under the direction of the Savior of the world, weak and simple things should come forth and break down the mighty and strong ones. ...

On the sixth of April, 1830, … a group of men and women, acting in obedience to a commandment of God, assembled in the house of Mr. Peter Whitmer [Sr.] to organize The Church of Jesus Christ of Latter-day Saints. … None of them laid any claim to special learning or significant leadership. They were honorable people and respectable citizens, but were virtually unknown outside of their own immediate neighborhood."

None of the people who began the Church were great leaders or renowned individuals among their peers. That includes Joseph Smith. All of them were simple, good, law-abiding people who were responding to the promptings of the Spirit in their lives. These are the kinds of people the Lord uses to bring about great things.

Using the plain, the simple, and the humble to bring to pass much righteousness and to accomplish great things, is one way for the Lord to demonstrate the transformative power of the atonement and of the Spirit in our lives. This should act as a living proof of God’s ability to make us, as weak as we are and as weak as we feel, like Him.

Joseph lived great and died great in the sight of God, but he did not start out being great. Greatness is what happens to each of us as we keep the commandments and follow the Spirit in all things.

We are part of Something Special

President Hunter said, “The Church of Christ, the kingdom of God on earth, was reestablished and destined, according to scripture, to roll forth and fill the whole earth [see Daniel 2:35].” Do we believe this? Each of us needs to decide at some point if we belong to just one of any number of churches that teach of Christ or if we belong to Christ’s church, the church and kingdom of prophecy that God showed Daniel, the prophet in revelation, would roll on to fill the whole earth.

What we truly believe will affect every decision we make with regards to how we face our callings in the Church. When we visit/home teach are we just racking up statistics or are we trying to build up those we have been assigned to visit, to strengthen their testimonies and deepen their love of the Savior. Are we willing to make whatever sacrifice is necessary to make those visits faithfully each month, or do we visit only when it is convenient?

We are not prophets in the same sense that Joseph Smith was a prophet. He possessed the mantle and calling of a Prophet, Seer, and Revelator. But according to the definition given by Elder John A. Widtsoe, we are all prophets, or at least we should be.

[Elder] John A. Widtsoe defines a prophet as a teacher—one who expounds truth. He teaches truth as revealed by the Lord to man, and under inspiration explains it to the understanding of the people. ...

Revelation is received in various ways, but it always presupposes that the revelator has so lived and conducted himself as to be in tune or harmony with the divine spirit of revelation, the spirit of truth, and therefore capable of receiving divine messages. ...

[Joseph Smith] did not attempt to proceed on his own powers. He was dependent upon the Lord and thereby received his help and was given his instruction. His life was led by revelation.

These three quotes from the lesson demonstrate the following things:

1. We all teach the gospel of Christ to each other and to those outside of covenant Israel. In each of our callings, no matter how humble it may appear, we demonstrate the patterns of righteousness to our neighbors through our behavior. Sermons are not always taught through words.

3. Just as Joseph Smith did not try to fulfill his calling on his own merits and abilities, so too are we unable to fulfill our callings and responsibilities with our own intellect and talents. We must, as Joseph did, rely on the Spirit for direction, for strength, and for support. The Lord’s will for us will always lead us into situations that are beyond our earthly ability to handle them without His support. The sooner we learn to be humble and lean on the Spirit for help, the better we will fare.

I have only covered a few of the points made by President Hunter in this lesson. I hope you will pour through his words and look for other things about Joseph Smith that you can apply to your own life.

Joseph Smith was a great man, and one beloved of God. But God loves Joseph no more than he loves you or me. He was able to bless Joseph abundantly because Joseph responded in all things with obedience and vigor. He learned his lesson early in life that if the Lord commanded it then the only real option for happiness was to obey and do what the Lord commanded. He did not just keep the commandments, but he flourished and relished his opportunities to obey. He loved to obey. We too can learn to love to obey, and in doing so we too can be blessed in our own way as Joseph was blessed.