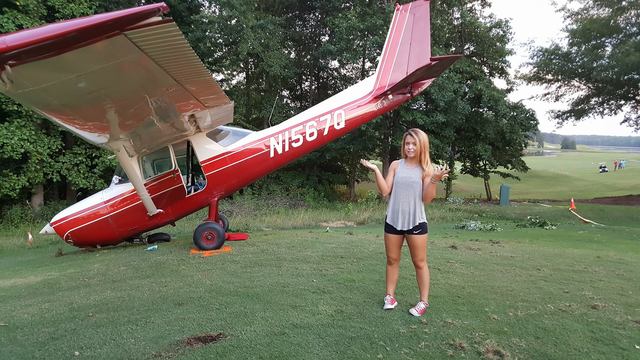 Seventeen-year-old Sierra Lund wasn't nervous when she took off for her first solo cross-country flight on June 29.

That's because Sierra had been around airplanes her whole life. Her father, Kevin Lund, works in the aviation industry and took Sierra to airshows when she was just a 1-year-old. When she was older, Kevin took Sierra on sunset flights and the two would go on trips together.

Mostly, she was just wanted to finish the required flight and be one step closer to getting her private pilot's license.

But just moments after taking off for her longest cross-country trip to date, something happened not even the most experienced pilots are likely to experience. The Cessna 150's engine sputtered, then stopped while Sierra, still a pilot student, was flying.

"I couldn't believe this was happening to me," Sierra says, remembering her thoughts as the engine died.

Kevin, who was nervous at the thought of his daughter flying 150 miles by herself, had no clue anything was wrong.

He says he said a quick prayer for Sierra before her plane took off and was sitting outside a hanger expecting Sierra to be back in about an hour-and-a-half from her round-trip. He was talking with Sierra's flight instructor when he got a call from a strange number about five minutes after he lost sight of her plane.

"On the other end of it was Sierra, and she said, 'Dad, I just crashed the airplane,'" Kevin says. "It was almost like the world slowed down and everything just kind of went into slow motion."

But it could have been so much worse.

When the plane's engine failed, Sierra was only 400 feet off the ground and flying directly over a lake.

"It doesn't get any worse than that as a pilot," Kevin says.

Thinking quickly, she turned the plane 180-degrees and headed toward the Planterra Ridge Golf Club in Peachtree City, Georgia. Staying calm, Sierra did exactly what she was taught to do when a plane engine dies and began guiding her plane for a landing.

But her plane was coming in fast. She landed on the course, hit a small hill, bounced, nicked a tree with the planes wingtip, and spun before finally coming to a stop on the fairway of the course.

After stepping outside of the battered plane completely unharmed, Sierra borrowed a cell phone from a golfer and called her dad.

"I didn't process how dangerous it actually was until I actually got out of the airplane and people started running up to me and telling me they were happy I was alive," Sierra says.

But not even then was Sierra too shaken by her "worst case scenario," as her father called it. On the night of the crash, she even asked Kevin if she could go back to the airport and try her 150-mile flight again.

Sierra credits her safety to her instructors, who taught her to trust herself, and her dad, who trained her to constantly look for places to land in case of an emergency whenever they'd fly together.

Kevin agrees, but thinks there was something more to it.

"I think we have a better understanding that there was probably somebody else in the cockpit with her when she was going through that situation that was probably helping her out," Kevin said. "And I honestly believe that it was definitely the Lord that was there and He definitely had a hand in it."

Sierra began flying again a few days after the crash and is continuing to work toward her pilot's license. She says she has two more cross-country trips left before she can get her license and hopes to someday work with Delta Air Lines.

Mormon Life AirplaneAirplane,Mormon Life
Comments and feedback can be sent to feedback@ldsliving.com