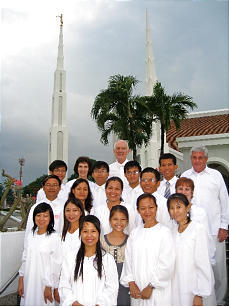 A series of remarkable events led to two Vietnamese families being sealed in the Manila Philippines Temple.

The Ho Quang Khoi family from the Hanoi Branch, and the Ly Thanh Tu family from the Ho Chi Minh City Branch were sealed in July. It is believed they are the first families living in Vietnam to be sealed in the temple. Six other dedicated members from the two branches also participated in temple ordinances.

The Ho Quang Khoi family first learned about the Church in Australia. Having been temporarily relocated there as part of his work, Brother Khoi went to a garage sale to purchase a washing machine. The machine was delivered by the bishop of the local ward. The Church came up in their conversation, and Brother Khoi became interested in the doctrine. After nine months studying the Church, the family was baptized.