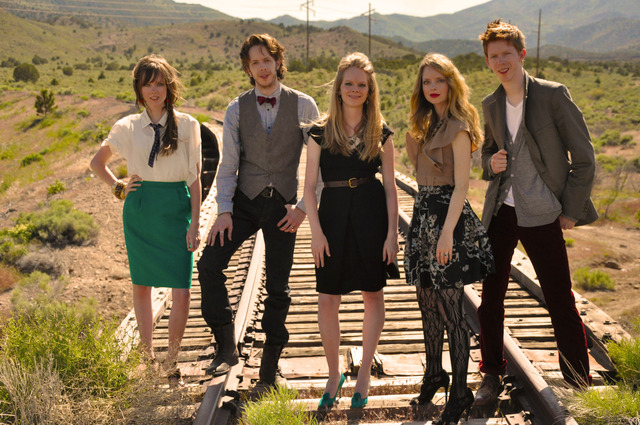 Accepted as a group to the prestigious Julliard School of Music, the 5 Browns are proof that piano lessons can pay off and practice does make perfect. Even today, having released three CDs and performed in venues as varied as the Grand National Theater in China and the Rose Bowl arena in Southern California, the 5 Browns still spend their summers practicing up to seven hours a day—five hours as a group and two hours on their own.

And all that practice time has paid off once again. On July 28, the five musical siblings will have their premiere with the National Symphony Orchestra in Washington, D.C.

Brown brothers Gregory and Ryan expressed excitement and gratitude for the opportunity to play with the National Symphony Orchestra.

“We feel really blessed and really fortunate to be able to play with such a great orchestra,” said Gregory.

The concert will take place at the Filene Center, an outdoor concert hall that seats more than 7,000 music enthusiasts.

Wolf Trap, a national organization that calls itself America’s National Park for the Performing Arts on its website, will host the July 28 concert. A major goal of Wolf Trap is to put on concerts that showcase the best in American entertainment in a variety of performing arts, bringing those arts to the widest possible audience.

Emil de Cou, conductor of the NSO at Wolf Trap, said the 5 Browns match perfectly with Wolf Trap’s goals for its concert season.

“In some ways, they’re kind of like a macrocosm or a distillation of everything we want to do in one concert,” said de Cou. “You have the attractiveness of youthful, exciting, energetic young people performing, which is always great to have. . . . And when you have very talented groups like the 5 Browns, they help reinvent the art form of performing classical music and update it, which needs to happen.” De Cou guessed that the combination of the superbly talented siblings and the variety of music will attract a great audience.

The concert will feature some more modern pieces but stay close to the Browns’ classical roots. Two of the Brown sisters—Deondra and Desirae—will combine with the NSO on a concerto by Francois Poulenc. And Ryan and Gregory will join sister Melody and the NSO for a Mozart concerto for three pianos and orchestra.

When asked what type of music he most likes to perform, Ryan Brown responded almost immediately: “For sure it’s classical.”

“We’ll jump around a little bit in the classical genre doing some contemporary works, but for the most part we’ll stick right in the classical area,” Ryan said. “We don’t jump much into jazz, although things like ‘Rhapsody in Blue’ we’ll play, but we don’t consider ourselves real hard-core jazz players.”

Gregory agreed. “[Classical music] is kind of our first love, and it’s where we find that we’re most able to express ourselves,” he said.

Because the use of five pianos together is unique, the 5 Browns often perform pieces which were arranged just for them. For example, the NSO concert will feature a special arrangement of George Gershwin’s “Rhapsody in Blue.”

“The Gershwin was especially arranged for five pianos, which is pretty unusual, because the Gershwin estate doesn’t give permission a lot for arrangements of Gershwin,” said de Cou. “This is kind of a special event just in the music world.”

“We’ll be playing a world premiere of a new work for five pianos and orchestra that was written especially for us,” Gregory said. “It’s kind of like a dream come true for the five of us.”

De Cou, who has worked with the National Symphony Orchestra for eleven years, praised the 5 Browns for their showmanship and expressed excitement for this first concert with them.

As a conductor, de Cou tries to conduct personalities more than instruments. He said it is essential for him to get to know the performers he is working with in order to blend their musical talents with the orchestra behind them.

Anticipating the upcoming concert, Ryan and Gregory Brown agreed that a live concert goes beyond the music.

“There’s nothing quite like getting up on stage with a huge group of other really talented musicians and  playing your hearts out and throwing everything into the music and living in that particular moment,” said Gregory. “Hopefully, the audience will be able to see that and go on that journey along with us.”

For more information or to purchase tickets to the concert, visit wolftrap.org. LDS Living readers can get a 10% discount by using the code “STEINWAY” when checking out.