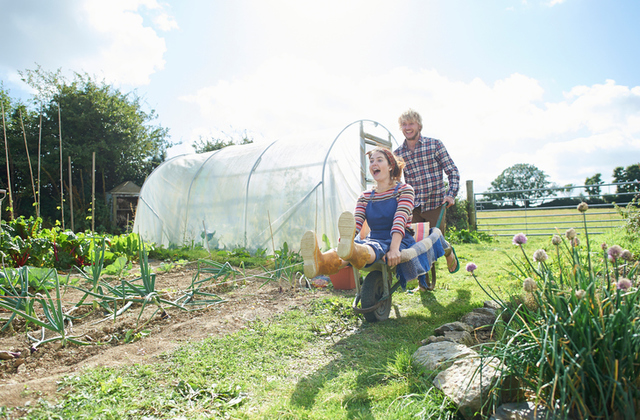 Have you ever wished your sister would finally take your advice because you know what is best for her? Do you ever wish you could have your husband do exactly what you think he should be doing all the time? Are you active in your efforts to get people to do what you want them to be doing, even if that control is born out of good intentions?

I once had an interesting conversation with a newlywed wife. She seemed a cheerful lady, always smiling and laughing. I asked her if she was always that happy. Her response surprised me. She said, “Not when my husband and I are alone. It’s hard to be so happy when he has so many things to work on.” She went on to explain that she was constantly busy telling him everything he needed to change, from habits to behaviors to the way he showed his love for her. She considered herself a good wife, and she wanted him to be a good husband. She was “helping him”—over and over and over again. She was trying to make him a better husband, and it was exhausting.

I suggested she give him some room to breathe and perhaps focus on her own choices for a while. But in her eyes, that simply wouldn’t do. She had to make him change. If she didn’t change him, he would continue on the same path and would never improve. Then she would never be happy.

“If you ride a horse without letting it rest, it will run until it dies. You need to give the horse a rest.”

I went on to explain. “If you constantly barrage your husband with criticism, scolding, and disappointment, you will kill him and your relationship. You cannot force him to be who you want him to be. Just as a horse needs time to rest and recover, your husband needs a rest from criticism and ‘helping.’ He needs time and space to learn and grow. You need to give him a rest.”

She was skeptical. “But what if he doesn’t change?”

“What if you don’t change?”

The concept that we cannot control those around us can be difficult to grasp. That was the struggle of this young wife and a lesson I needed to learn as a newlywed as well. My story was much the same as hers until a wise person gave me the same advice I gave her. At first I thought, No way. If I do that, I will become an even better wife and he won’t improve at all. That’s not fair. But I took their counsel. I gave him a rest and started to focus on myself.

What I learned was surprising and, initially, a little depressing. When I stopped focusing on him and started to work on myself, I realized I wasn’t as good a wife or person as I’d thought I was. I realized I was critical, short-tempered, slow to forgive, and quick to feel sorry for myself. I began to realize how much I needed to work on. So not what I had expected!

I started focusing my attention on the things I had control of: my choice to love him as he was, how I chose to show my love for him, my reactions, my attitude, my responses. I tried to be the kind of person I knew my Father in Heaven would have me be. As I started to focus on changing myself, a funny thing happened: I began to change . . . and so did my husband.

It is difficult to say if his change came about because I gave him room to grow rather than always “helping.” Perhaps, I think more realistically, the appearance of his change came because as I grew, my capacity to love grew; I was able to see him for who he was and not for what I thought he should be. I no longer felt the need to make him act a certain way, or tell me he loved me in a specific way, or clean the kitchen a certain way. I didn’t feel the need to force him into being what I wanted, because I realized he already was who I wanted—imperfections and all.

The Lord clearly states that we should not “exercise control or dominion or compulsion upon the souls of the children of men, in any degree of unrighteousness.” When we do, “the heavens withdraw themselves; the Spirit of the Lord is grieved” (D&C 121:37). Lucifer’s unrighteous desire to compel each of us to always choose the right was enough to disqualify him to become our Savior (see Moses 4:3). So force is not a good thing.

Our individual right to choose is an intrinsic part of Father’s plan. Choosing to be like Him is the only way to become like Him. Personal growth, change, and conversion cannot ever be forced. They must be chosen. That is true for ourselves and the people around us.

The question may arise: is being compelled the same thing as being forced or controlled? Consider the Zoramites in the Book of Mormon who were “compelled to be humble” by their poor circumstances (Alma 32:13). They were very much forced into their destitute lifestyles due to the pride and greed of their brothers. At that time, they had little to no control over their circumstances, but they had full control over their reactions. They were influenced by their circumstances to humility and then faith, not forced. It was their internal condition, not their external circumstances, that pleased Alma because he knew they were prepared to hear the word of God (see Alma 32:6).

Alma taught that we should be “humble, and be submissive and gentle; easy to be entreated; full of patience and longsuffering” (Alma 7:23). Does that sound like control or the seeds of righteous influence? As we keep our focus on the one thing we do have control over—ourselves—others might see the change in us and want to change themselves. They might be easier to love, but so will we.

When we stand before our Savior to be judged, we won’t be standing next to anyone else—not our spouse, our parents, our children, our friends. And He will want to know how we did, who we became, and what we did to follow Him. We cannot say, “Well, I tried to change, but Harvey just had so much to work on. I was so busy helping him that I didn’t have any time to work on myself.” We will be held accountable for ourselves, no one else. That means we can’t blame anyone else either.

It is a scary thing to do, to change our focus from someone else back to ourselves, to give up that false sense of control. But we will change and grow. We will also inspire and influence others to change and grow.

For more from Michelle Wilson, read The Beautiful Balance: Claiming Personal Control and Giving the Rest to God, available at Deseret Book, or check out her other articles on LDS Living: "How a Trip to the Grocery Store Changed My Life" and "3 Steps to Finding Peace in a World That Feels Out of Control."