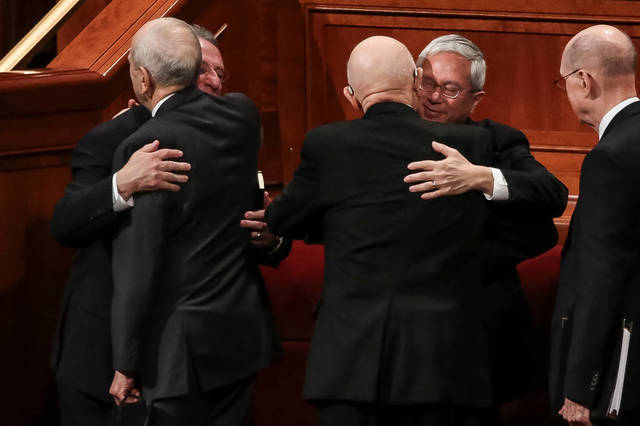 The Apostles Each Share One Powerful Experience That Defines Their Calling, Ministry: "I Knew You Could Help Because I Saw You in a Dream"

What touching experiences from the Quorum of the Twelve Apostles that testify of the calling these men hold as special witnesses of our Savior.

Even though members of the Quorum of the Twelve Apostles have the responsibility under the direction of the First Presidency to “regulate all the affairs of [the kingdom of God] in all nations” (Doctrine and Covenants 107:33), they also have personal experiences and insights that define their ministry.

“We are responsible to shepherd the Church under the direction of the First Presidency,” said President M. Russell Ballard, Acting President of the Quorum of the Twelve Apostles.

“At all times, first and foremost, we are witnesses of the living reality of the Lord Jesus Christ,” said Elder David A. Bednar. “We are not administrators but ministers of the gospel of Jesus Christ.”

In part two of a Church News series of articles on the Quorum of the Twelve Apostles, each member of the Quorum shares one thought or experience that is representative of his apostolic calling.

Elder Renlund recalled an incident two years ago that illustrates his service in the Quorum of the Twelve Apostles.

He was traveling from Santo Domingo in the Dominican Republic, through Panama City as a transit hub to get to Georgetown, Guyana, for a district conference.

Elder Renlund, traveling with Elder Hugo Martinez, who spoke Spanish, had 40 minutes in the Panama City airport. “It was rushed and we felt like we were just really lucky to get to our departure gate,” he recalled.

In the next gate, almost in the same line, getting ready to get on the plane was a woman whose name Elder Renlund later learned was Monica.

“Monica came over and said, ‘Are you members of The Church of Jesus Christ of Latter-day Saints?’”

Elder Martinez told the woman in Spanish that they were.

“Can you help me?” she asked. She wasn’t a member of the Church and needed help with a complicated membership issue relating to a deceased relative.

“I had served on a committee that dealt with these complicated membership issues in the year and a half before my call to the Twelve,” said Elder Renlund. “So I knew what information we needed and what we could do to help.” As he reached into his briefcase, pulled out a card and explained to her what she needed to do, she burst into tears. She said, “I knew you could help me because I saw you last night in a dream.”

She emailed Elder Renlund, and they resolved the problem. “Her children, who are members of the Church and are also relatives of this individual, were just so overjoyed to have this resolved,” he said. After the resolution, Monica wrote Elder Renlund and said, “My children now believe in miracles.”