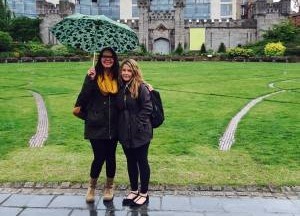 My parents divorced before I was born, setting the tone for an inconsistent religious upbringing. Although my mom grew up in a Mormon family, she was no longer religious. My dad and stepmom were members of the Mormon church but weren’t very active. As a result, I scarcely went to church growing up. I was baptized at 8 years old, but I didn’t understand what it meant.

When we did go to church, I felt uncomfortable. I never received the education about the foundational principles of the gospel, and didn’t even understand the general layout of the scriptures (Was Mark in the New Testament or the Book of Mormon? What was D&C?). I was terrified of being called on in class, so I made myself as small as possible. Although I had a lot of fun at various church camps and youth conferences, I always felt like an outsider invited to someone else’s party.

In seventh grade, my best friend started becoming distant. When I asked her about it, she asked me some questions: “Nicky, when was the last time you went to Young Women?” I couldn’t remember. “Nicky, have you ever given a talk in church?” I hadn’t. She explained that she couldn’t be friends with me because I wasn’t “Mormon-enough.” My heart broke as I struggled to understand.

In my sophomore year, I started dating my first boyfriend. He came from a very active Mormon family, and his parents hated me because I didn’t. He was my first love, but keeping our relationship a secret wore on us. We finally broke up a year later. I was devastated—I had lost another person close to me because I wasn’t Mormon-enough.

In college, I was looking for someone who held basic Christian values, but wasn’t actively religious. Despite my best efforts, I didn’t find anyone. Eventually, I dated a Mormon boy from my work, but our relationship ended a couple of months later for a familiar reason—I wasn’t Mormon-enough. After that breakup, I decided I wasn’t going to associate with the Church at all. I was angry, bitter, and sick of feeling rejected.

A couple years later, my best friend approached me and asked if I would remove my records from the Church with her. Surprising myself, I said no. I reasoned that although I didn’t love the Church, I didn’t hate it—I just wasn’t part of it. I didn’t want to burn any bridges in case I found God one day and came back. She didn’t understand, but I was firm.

Read the rest of this story at www.faithandhappiness.com/