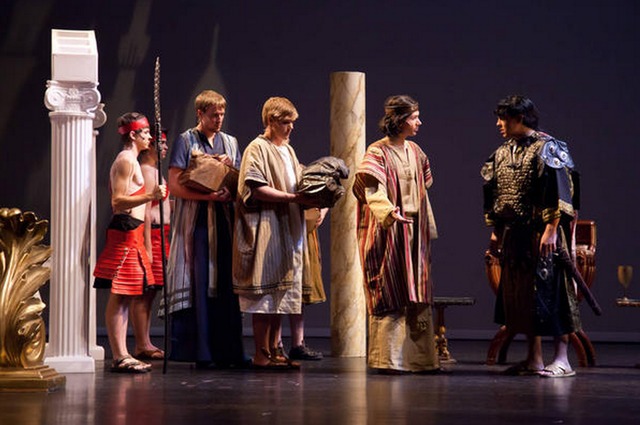 MR says: That's right! There's another Book of Mormon Musical opening is Salt Lake--this one written by a Latter-day Saint.

Salt Lake City is currently home to two musical theater productions based on the Book of Mormon — one a Tony Award-winning Broadway hit, and one a humble offering from a self-taught composer seeking "to represent the Book of Mormon accurately and in an inspired way.”

While "The Book of Mormon" began a two-week run at Capitol Theatre on July 28, “Nephi and the Sword of Laban” opened July 27 at Salt Lake Community College’s Grand Theatre. It will be performed through Aug. 8.

Sherry Allred, a member of The Church of Jesus Christ of Latter-day Saints from Centerville, is the composer and writer, and the musical has “been brewing within (her) heart for a long time.”

“My original purpose was to share the Book of Mormon and encourage people to read it,” she said. “Honestly, I don’t want to pick a fight with (‘The Book of Mormon’ musical).”