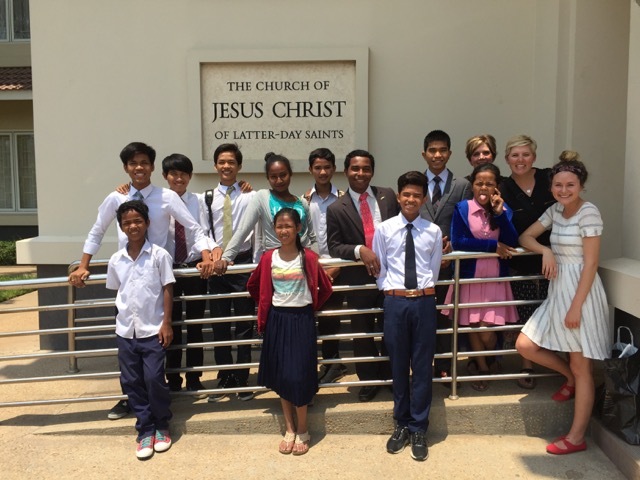 Ever since she was little, Jessica Coleman of the Santa Margarita ward knew she wanted to own her own business one day, but after hearing a story a year ago from Jordan Law, a leader in her local congregation, she added a new goal: she wanted to give away part of her earnings to others.

“He said when he was a kid he set aside 10 percent of his money for tithing and 10 percent to give away to someone else.” That impressed her, and she decided to follow his example.

She already had the business. When she was a sophomore, her mother, Adrianne, asked Jessica to hand paint a globe similar to the expensive ones they’d seen in a trendy store as a gift for Jessica’s older sister returning from her mission. Jessica made the globe and liked it so much that she added it to her Etsy store, The Curious Life Shoppe. 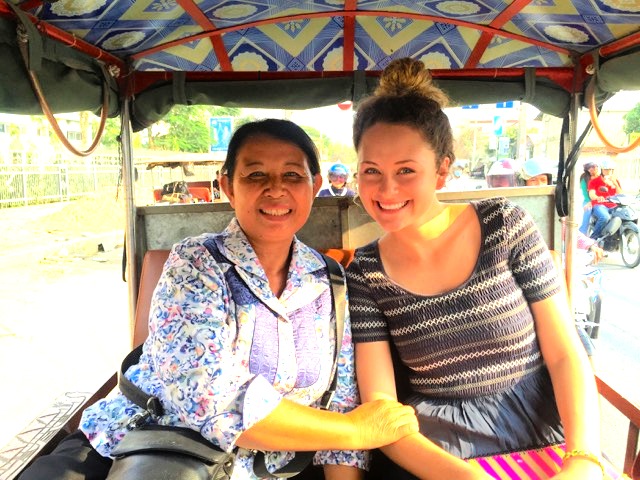 Jessica with Botevy Keo, the founder and director of CICFO. She is a survivor of the Khmer Rouge era in Cambodia and joined the Church over a decade ago.

Etsy is an online marketplace for selling handmade goods, and Jessica began to track her earnings in a spreadsheet, watching a steady trickle of earnings come in from her business. But even though she’d set the money aside to donate, after a year she still hadn’t figured out which charity to give it to.

She knew she wanted to do something for kids and that she wanted it to be international to give her an opportunity to travel. Then, just after New Year’s, a friend told her about an organization in Cambodia that piqued Jessica’s interest. It was called the Cambodian International Children Friend Organization (CICFO).

The orphanage had been opened by an extraordinary woman named Botevy Keo who wanted to make a difference in her country. Botevy joined the LDS Church in 2002 and opened the orphanage in 2006 to help take care of the abandoned children she saw on the streets of the city. Now the orphanage is home to 30 children, but not all of them are orphans. Many come from homes or villages so poor that they sleep on dirt floors and go hungry every day so the parents send them to Botevy in order to give them a better life. 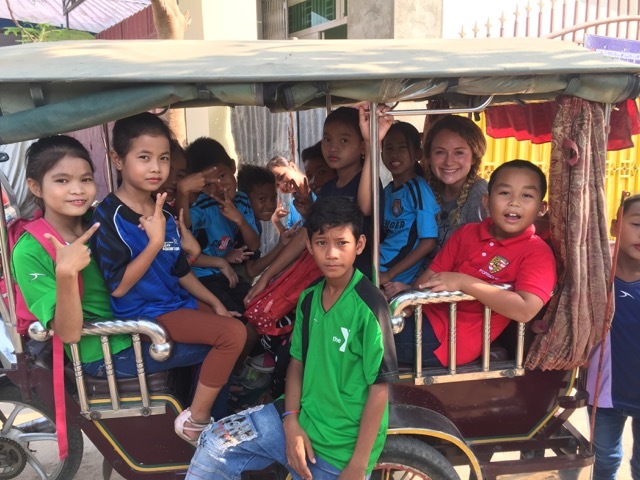 Jessica and some of the children on a tuk-tuk enroute to a stake Khmer New Year celebration.

At the orphanage, the children become a big family, one Adrianne describes as “full of love.” The kids are from ages eight to 18 and the older children help care for the younger ones. The children all attend public school and have additional tutors at the orphange where they learn Khmer and English so they can improve their future job prospects. They all help the orphanage run, doing jobs from laundering their clothes to preparing their meals over a charcoal fire.

Jessica loved the idea of sending her money to the orphanage and immediately looked into plane tickets to go and visit the orphanage, but they were insanely expensive--$700 for a one-way trip. However, one day in January, her friend told her about a 24-hour sale where Jessica could get a round trip ticket for $600. Jessica couldn’t believe her luck. “She came to me and said, ‘If I pay for my own ticket, can we go to Cambodia for spring break and visit the orphanage?’ And I said absolutely,” Adrianne recalls. They bought their tickets that day.

Jessica couldn’t wait until their trip. Finally having a charity she could get excited about, she began to really focus on her business.

“I’ve always had a testimony of tithing, but this (the goal of earning money to help the orphanage) added on top of it, and I had a crazy amount of success in a short period. That’s the only explanation I can think of.” Her business began to triple the income she’d made in previous months with orders coming in from all over the country. 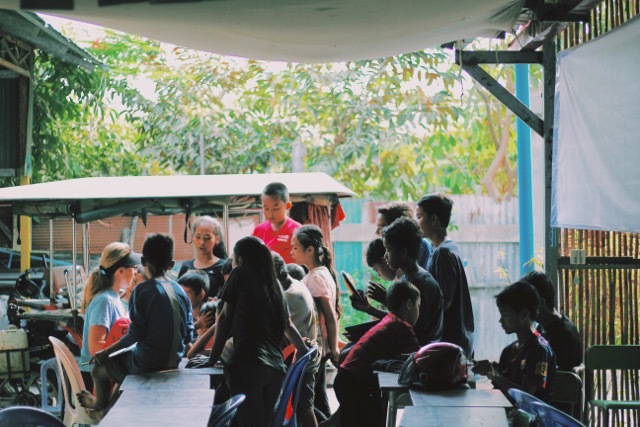 Volunteers reading with all of the children at CICFO.

The Colemans just returned from their trips, but it’s obvious big pieces of heart are still with Botevy and their new Cambodian friends. They stayed at the orphanage for a week, playing with the younger children and helping the older ones with their schoolwork.

The experience was life-changing. Adrianne describes one of the most special moments: "As part of the Khmer New Year celebration, the children performed traditional Khmer dance routines for us. Then they held a Srong Preas ceremony where children wash their parents and elders from huge bowls filled with water and fragrant flowers. As they respectfully poured the water over our heads and scrubbed us with their hands, they spoke words of gratitude and blessings upon us. I couldn't hold back my tears as expressions of love flowed freely both ways. It was such a sacred moment, almost temple-like." 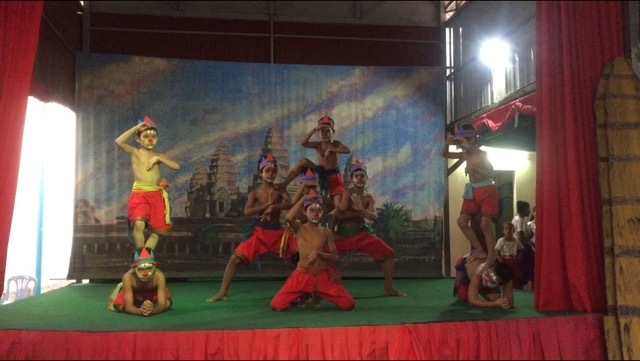 The children at CICFO performing a traditional Khmer dance, the money dance.

The children all attend the Mormon church every Sunday. It’s something the parents must agree to for their children to be placed in the home. Many of the children want to be baptized, but the Church requires them to wait until the age of 12 because of their family situations. So far, Botevy has sent out five missionaries. Most of them serve in Cambodia, but the Colemans met two who had just returned from missions in Australia and England.\

Every Sunday in the orphanage they have a family night where the children sing their favorite hymns and share their testimonies. The sweetness of those experiences overwhelmed Adrianne.

“These little children are so grateful and appreciative,” she says. Jessica adds, “You could see their gratitude from a gospel perspective, like ‘God gave me these blessings,’ even though they have so little and have been through so much.” She said despite all their hardships, the children are genuinely happy. 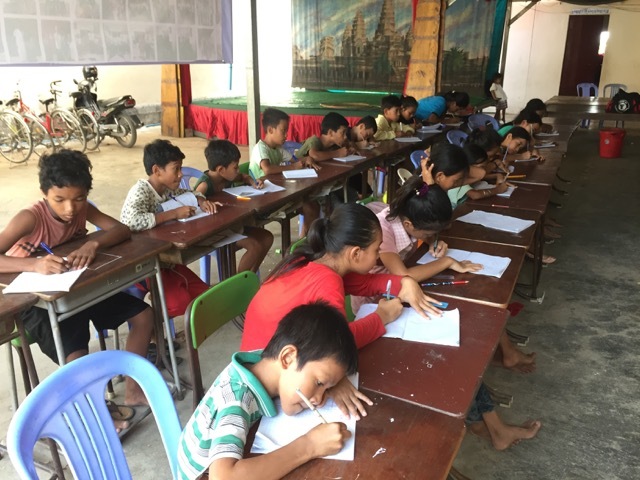 Children at CICFO doing their lessons and studying.

The average Cambodian salary is about 100 U.S. dollars per month, so the donations they receive have an enormous impact. The money goes directly to helping the kids. It pays for their clothes, schooling, and meals, all of which the kids help take care of. Jessica notes that as they got ready for church on their first Sunday there, the older kids cheerfully helped the younger ones, and almost all 30 of them were ready before the two Colemans.

Adrianne says, “They do what they’re supposed to and they’re grateful to do it.” She was touched by their prayers which include a daily plea to help them learn their English lessons because it’s their key to economic success as adults.

Jessica says that she always “knew” that people only need the basics to be happy, but as she watched the kids who truly had only the basics, she truly understood that all anyone needs for happiness is, “your family, the gospel, a place to sleep, food, and clean water.” She says that even though she used to complain about going to school before, now when she hears her classmates doing it, it makes her cringe because she sees it as a privilege instead of a burden.

“The antidote to taking things for granted is gratitude and choice, choosing to be happy.” And this Adrianne points out, comes when we recognize the handful of things that matter in life, and know that everything else is just a bonus.

Lead image of the children at CICFO attending church. The two young men in suit coats are recently returned missionaries who grew up in CICFO. One served in Australia and one in London.

Melanie Jacobson is the media director for her stake's public affairs committee. You can read more of her articles on the Santa Margarita Stake blog.