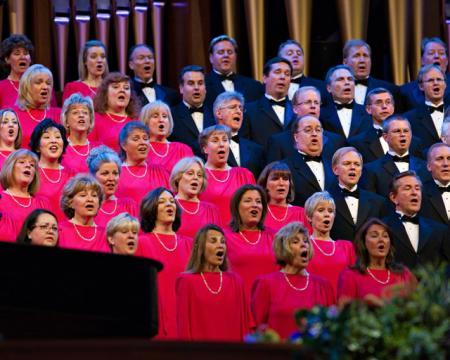 The Choir celebrates a history with U.S. presidents

“America’s Choir” has been moving audiences since its beginnings in 1847, with the presidents of the United States as no exceptions.

January 20, 2011 marks the thirty-year anniversary of the Mormon Tabernacle Choir singing “Battle Hymn of the Republic” to Ronald Reagan at his inaugural parade in 1981. But “America’s Choir,” so dubbed by President Reagan on that very occasion, has brought more than one president to tears on his first day in office.

The Mormon Tabernacle Choir has sung for every president of the United States since President Taft and has performed in five presidential inaugurations, beginning with the ceremony for Lyndon B. Johnson in 1965. During this parade, the choir of 360 serenaded President Johnson with “Battle Hymn of the Republic.” The hymn, written by Julia Ward Howe during the Civil War, has been sung by the Mormon Tabernacle Choir since the 19th century when it consisted of little more than a horse-drawn organ in the Salt Lake Valley.

Trading in organ and horses for an orchestra and parade float, the Choir next sang for President Richard M. Nixon at his inauguration on January 20, 1969. The Nixon administration asked the choir to sing “This is My Country,” a song focused on American patriotism written in the face of WWII. At this celebration, the director of ceremonies named the Choir “The world’s greatest and most celebrated singing unit.”

President George H. W. Bush proclaimed the Choir "a national treasure" after its performance on his first day of office on January 20, 1989. Like father like son, President George W. Bush was also serenaded by the Mormon Tabernacle Choir at his inauguration ceremony in 2001.

On November 12, 2003, President Bush presented the Mormon Tabernacle Choir with the National Medal of Arts, the nation's highest honor for artistic excellence. Mac Christensen, president of the Choir, accepted the award, noting President Bush’s love for the Choir evident in the "twinkle in his eye."

As shown by years of moving the nation’s presidents and deserving many acclamations, the Mormon Tabernacle Choir has proven itself not only “a national treasure” and “the world’s greatest and most celebrated singing unit,” but as Reagan said 30-years ago, “America’s Choir.”

*To watch the Choir’s performances at Presidential inaugurations, check out these sites: