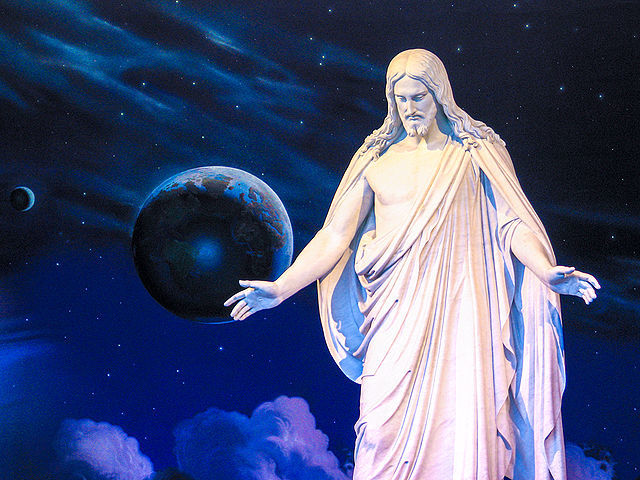 Each year, more than two million people view a copy of Bertel Thorvaldsen's Christus dramatically displayed on Temple Square, and another two million see copies of the Christus in other LDS visitors' centers throughout the world. In addition to the traffic at visitors' centers, countless individuals have seen the Christus in Church media productions, pamphlets, open houses, videos, magazines, and on the Church's official website (lds.org). Naturally, with such exposure, it is easy to associate this particular work of art with the Latter-day Saints.

The Creation of the Christus The inspiration for Thorvaldsen's work is unknown and could have come from his study of classical Greek sculptures, especially the work of Raphael. There are other potential inspirations, but because Thorvaldsen rarely kept drawings or models, we shall probably never know the precise evolution of the statue. However, there are five known sketches/models of the Christus: three plaster models and two pencil drawings.

Apparently, Thorvaldsen was not satisfied with this arrangement and spent considerable time fussing with it. According to J.M. Thiele, Thorvaldsen's biographer, Herman Ernst Freund listened to Thorvaldsen's complaints with his arms crossed upon his chest and questioned what Thorvaldsen wanted to communicate with the position of Christ's arms. As Thorvaldsen contemplated an answer, he suddenly exclaimed, "I have it now! It shall be so!" Thus, according to Thiele, the conception of the Christus was nothing short of divine inspiration.

Theodor Opperman, a former director of Thorvaldsen's Museum, has a more practical variation on this story. While Freund, standing with arms folded across his chest, was listening sympathetically to the discouraged Thorvaldsen, he tried to cheer him up, unfolded his arms, and half-opened them, dropping them slightly downward, palms upward. Thorvaldsen saw his friend pose the posture he desired for his statue of Christ and quickly sketched the idea in his notes.

One last version of how the arms of Christ came to be positioned deals with one of Thorvaldsen's early clay models. In this version, the raised arms slumped during the night from the blessing position to the waist. Thorvaldsen, upon seeing this new pose, quickly made it permanent.

This tale, a favorite among many, allows the listener to interpret that the Christus was conceived either by luck, divine intervention, artistic process, or mere gravity. None of these versions can be either confirmed or ruled out. Some believe the Christus to be the pragmatic result of artistic trial and error, while others see in it divine guidance, even though Thorvaldsen was not considered a devout Christian by many of his contemporaries.

This should not, however, rule out divine inspiration impacting Thorvaldsen's Christus. President Spencer W. Kimball, after viewing the Christus and Thorvaldsen's Twelve Apostles in the Church of Our Lady, stated that "the man who created these statues was surely inspired of the Lord."

The original casting of the statue was plaster, and debuted in the Church of Our Lady in 1829. Another plaster casting went to Carrara, Italy, to transfer the figure into a marble statue, which was finally mounted in the cathedral in 1839. The Christus Comes to Salt Lake City In 1912, President Joseph F. Smith asked Stephen L. Richards, then a member of the Sunday School general superintendency, to investigate the possibility of the Church's creating a cemetery in Salt Lake City. Richards visited several cemeteries to view their properties and meet with management. One of these cemeteries was Forest Lawn in Glendale, California, where Stephen L. Richards became friends with its owner, Hubert Eaton. The Church went forward with plans and created Wasatch Lawn Cemetery on Highland Drive in the eastern foothills of Salt Lake City. After President Smith's death in 1918, President Heber J. Grant felt that owning the cemetery was not in the best interest for the Church, and asked Richards, now an apostle, to find a buyer for Wasatch Lawn. Elder Richards ended up buying the property himself, and now as a cemetery owner, his and Hubert Eaton's friendship continued to grow. Almost 30 years later, as part of his 1950 apostolic assignments, Stephen L. Richards visited the missions in Europe, Scandinavia, Britain, and the Middle East.

On September 2, 1950, while visiting Copenhagen, Elder Richards and his wife Irene visited the Church of Our Lady. According to Philip Richards, Elder and Sister Richards's son, while his parents were in the Danish cathedral, they had an "awe-inspiring experience" while gazing at the Christus and "the idea was planted in his father's mind that a copy of this statue needed to be on Temple Square." It would be a few more years until that inspiration would unfold in reality. The opportunity came when in the 1950s the Temple Square Presidency was assigned to find ways to improve missionary work at the historic site. The plans to build a new center were approved by the First Presidency in 1955.

Around this same time, plans were brainstormed to provide visitors with a guided tour of the grounds. According to George Cannon Young, it was in a planning meeting that Elder Richard L. Evans, President of the Temple Square Presidency and member of the Quorum of the Twelve Apostles, commented, "You know, the world thinks we're not Christians because they see no evidence of Christ on this square. They hear the words, but see no evidence."

On June 7, 1957, the Church Building Committee met with the First Presidency to present their new proposal. Even though the Temple Square Presidency felt certain that a heroic-sized statue of Christ should be placed on the Square, they were nervous how the First Presidency might react to such a proposal. After all, statuary of Christ had never been a part of traditional LDS worship.

At the hesitancy of the rest of the committee to describe their proposal, Stephen L. Richards announced that the building plans included a spot for the Christus. Apparently Richards and President McKay had already discussed the plan, because President McKay then turned to him and asked, "Don't you have access to acquire a statue through your association with Hubert Eaton and Forest Lawn?"

President Richards was asked to determine the feasibility of obtaining a copy of the Christus. He immediately contacted his friend, Hubert Eaton, to see if he might make a copy of one of the Christus statues on display at Forest Lawn. Richards decided to make the statue a personal and anonymous donation to the Church so he took care of all of the preliminary work himself. The statue was sent to Italy and a marble replica was made.

The finished statue ordered by Richards was eleven feet one-quarter inch and weighs close to 12,000 pounds. Shockingly, President Richards became gravely ill, and passed away just days before the finished statue arrived in Salt Lake City. Sadly, Stephen L. Richards never saw the statue that he hoped would become a legacy to the Church.

A Home for the Christus

The Christus Legacy For Latter-day Saints, the Christus has become a familiar representation of their faith—an icon, of sorts. President Howard W. Hunter called the statue a "memorial" which serves "to unite generation with generation, preserving in a long, unbroken chain the important events of our common heritage." All who have come a little closer to Christ through the Christus have partaken of the Christus legacy.

Matthew O. Richardson serves as associate dean of Religious Education at Brigham Young University and is an associate professor of Church History and Doctrine. He is the author of Personal Promises from the Lord to You, The Relationship Seasons, and The Christus Legacy, from which this article is excerpted.