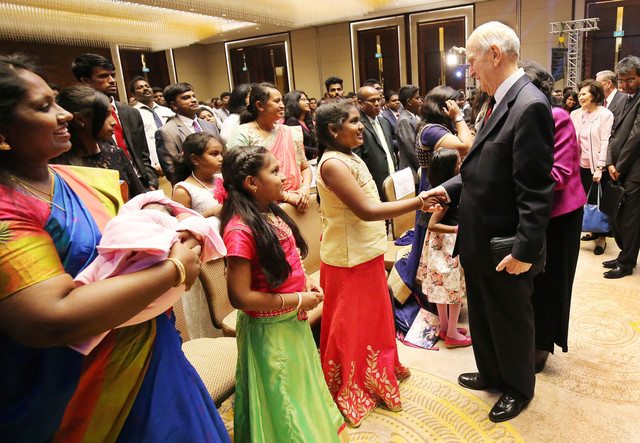 The Church in India: Miracles Past and Present

Of India’s 1.3 billion people, its 13,500 members of the Church represent only a sliver of the country’s total population. But although this number seems small, the faith of the Saints in India is great. The Church in India has grown significantly since the gospel was first introduced, and more growth is coming. With the recent announcement of the new temple in Bengaluru, the hastening of the work in India is just beginning. 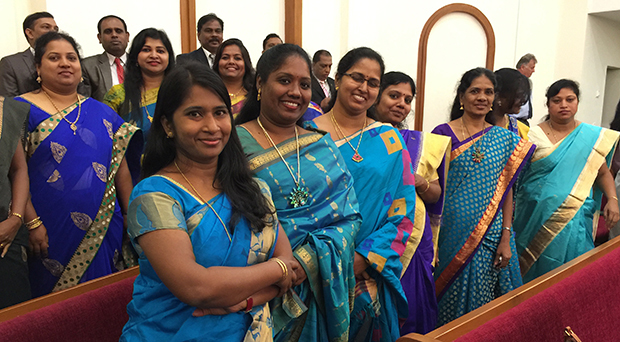 Indian members at the organization of the Bangalore India Stake. Photo from Church News.

The Church first reached India in 1850 when British sailors arrived in Calcutta, India, a trading post for the East India Company. Elder Joseph Richards, the first official missionary in India, arrived there in 1851. Elder Richards baptized several people during his mission and even set apart a few converts as missionaries to serve in the area with him.

In the years that followed, more missionaries arrived, teaching in areas of India including Madras, Bombay, Rangoon, Parachi, and Poona. A few baptisms followed, and a small number of additional branches were established. However, the Church struggled to remain grounded. The Church Almanac states that the missionaries “quickly discovered that the British and Europeans who lived in India were ‘aristocratic and cared little for spiritual things.’” They also found that the Indian people, who by this time had been exposed to the proselytizing strategies of other Christian religions, expected some economic return after becoming members of the Church. By 1854, the number of baptisms had dropped and most of the missionaries had returned home.

Over the next century, the Church in India experienced little growth. John H. Cooper served as a missionary in the early 1900s, but after that, missionary work was scarce. Many of the converts emigrated out of the country, which made it difficult to keep the branches going.

But although the Church was not actively sending missionaries to India, effort was still made by the Church to reach out to the people there. In 1921, David O. McKay arrived as the first general authority to visit the country. In the 1970s, then-Elder Gordon B. Hinckley visited India as an apostle, and Jeffrey R. Holland visited as the Church’s Commissioner of Education. By 1974, there were 115 known members of the Church living within India’s borders.

In a 1977 BYU Devotional, then-Elder Gordon B. Hinckley spoke of his visit to India, painting a stirring image of what the Church in India was like during that time:

“. . . [There] are five small branches of the Church in those poor rural villages of southern India. Here the members have constructed three or four little buildings, neat and clean, and over the door of each is a sign, in both English and Tamil, that reads, ‘The Church of Jesus Christ of Latter-day Saints.’ The floors are concrete and without benches. To seal the concrete, cow dung mixed with water was spread on, allowed to dry, and then polished. It made for a clean-looking floor where the people sat as together we met, shared our testimonies, and partook of the sacrament of the Lord’s Supper” (Gordon B. Hinckley, “Forget Yourself,” 1977).

He also made a powerful prophetic statement in regards to India’s future:

“Somehow, someday, under the plan of the Lord, the time will come when the gospel will be preached in that land with power, and the harvest will follow” (Gordon B. Hinckley, “Forget Yourself,” 1977). 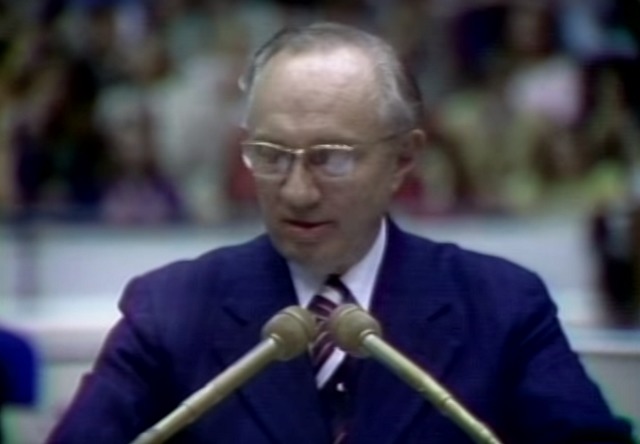 President Hinckley speaks of his visit to India in a 1977 BYU Devotional. Image from YouTube.

Although the missionary field was not open at this time, miracles in India still occurred, making the Lord’s love and concern for His children there very apparent. In addition to humanitarian efforts made by the Church in India, the Lord also provided unique ways for His individual children to learn about the gospel.

One of those miracles happened to Michael Anthoney, a young student attending secondary school in Bengaluru in the early 1970s. Anthoney’s family was poor, and since his father was unemployed, the only way he could get an education was through a sponsorship of $12 a month from a donor in the United States. The family that sponsored Anthoney was the family of Delvin and Kathy Pond, who were members of the Church living in Salt Lake City, Utah. After seeing an ad in a magazine for the Christian Children’s Fund and experiencing a powerful prompting from the Spirit, the Pond family began sending $12 a month, allowing Anthoney, a boy they had never met, to stay in school.

Over the years, Anthoney corresponded often with his sponsor family, thanking them for their support. One year the family sent Anthony a subscription for the National Geographic Kids magazine for children. Eventually, the Ponds began sending him copies of the New Era and even sent a pamphlet about Joseph Smith and the Restoration.

Anthoney had studied the Bible in school and had explored the Seventh Day Adventist and Catholic faiths with some confusion. He felt a connection to Joseph Smith and his desire to know which of the churches was true. “I felt [a] very strong feeling that I was in the same situation,” Anthony says. He wanted to learn more, and as he studied and prayed on his own, he felt a desire to be baptized.

In 1981, the first missionaries in almost 80 years arrived in India. Alma and Marie Heaton, a senior couple from Utah, were impressed with Anthoney’s eagerness to learn about the gospel. He was baptized by Elder Heaton that spring, and eventually served a mission of his own in the Salt Lake City South Mission—where he finally met the family that sponsored him and introduced him to the gospel. 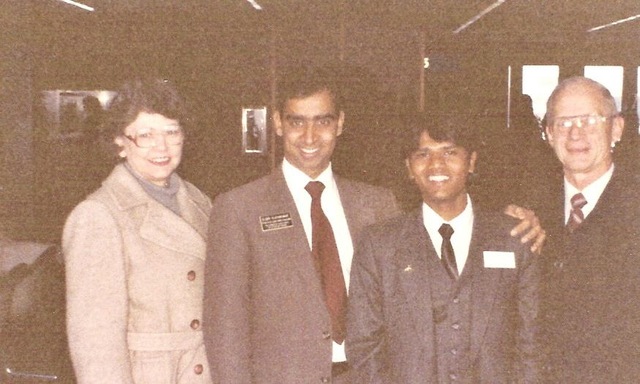 The Field Is White Again

Individual miracles like Anthoney’s continued to occur as the work in India continued to hasten. In 1982, The Church of Jesus Christ of Latter-day Saints was recognized by the Indian government as an official legal entity, and more missionaries arrived soon thereafter. In that same year, the Book of Mormon was translated in the Hindi language.

A decade later in 1992, Russell M. Nelson visited India as an apostle. The India Bangalore Mission was organized the following year, and by 2003, there were over 4,000 members. President Hinckley visited India again in 2005, this time as the prophet of the Church.

In 2007, another mission, the India New Delhi Mission, was opened—bringing the gospel to areas of Northern India, Pakistan, Nepal, Bhutan, and Bangladesh. By 2010, the Book of Mormon had been translated into five of India’s 20 major languages: Hindi, Tamil, Telugu, Urdu, and selections in Bengali. Dallin H. Oaks also organized the first stake in 2012.

The Church in India Today 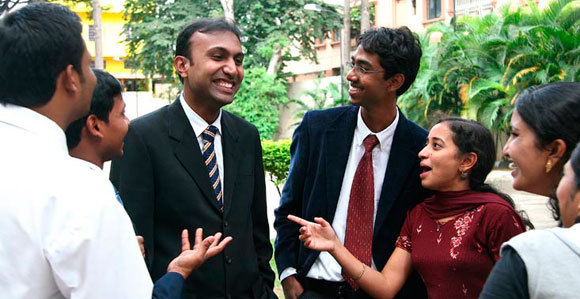 Members of the Hyderabad India Stake. Photo from Church News.

President Nelson had originally planned to announce only six temples in April’s general conference, but a last-minute prompting led him to make the announcement. “The Lord told me on the eve of conference: ‘Announce a temple in India,’” President Nelson said. “. . .That was the Lord's doing.”

Among the first to hear of the temple announcement were Michael Anthoney—the same convert who learned of the Church through the Utah family that sponsored his education in the 1970s—and his friend Latha Palani, an Indian woman who joined the Church after moving to Utah in 1994. As interpreters translating the conference into Tamil for the people of their home country, Anthoney and Palani received the message about 15 minutes before the rest of the world.

“They [passed] around the paper and I saw that it said Bengaluru, India. I couldn’t believe it,” Palani says. The announcement especially hit home for her because it was the powerful feeling she experienced visiting the temple grounds in Provo that had led her to take the missionary discussions. “What I experienced here at the temple, the people in India will feel it in the near future.”

“I felt so happy,” Anthoney says. “I wanted to shout, but I [couldn’t] do it.” Instead, the small team of interpreters wept silently for joy.

Looking to the Future

As the Indian Saints prepare for the construction of the House of the Lord, the future is full of hope. The prophecy made by President Hinckley over 40 years ago is being fulfilled, and Church leaders today continue to speak of the spiritual growth coming to this massive nation.

President Nelson and Elder Jeffrey R. Holland, accompanied by their wives, visited Bengaluru as one of their stops on their world tour in April 2018.

“You can’t imagine what is going to happen in India,” Elder Jeffrey R. Holland told Deseret News after visiting the Indian Saints. “Your loftiest dreams . . . will be painfully shortsighted.” 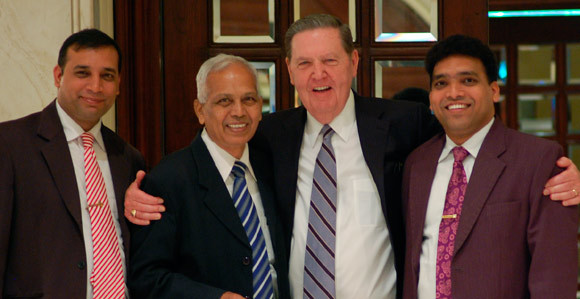