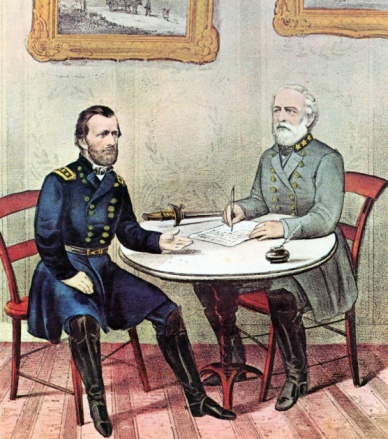 After celebrating U.S. independence with family and friends beneath a shower of fireworks on Monday, many Americans reflected on the freedoms we enjoy because of sacrifices made in behalf of this great nation. Many sacrificed their lives for that freedom under the fall of some very different fireworks: cannon fire.

This year marks the 150th anniversary of the American Civil War, still the bloodiest conflict in the county’s history. While the majority of the Saints had moved West a decade or more before the Civil War broke out, there are still some intriguing Mormon connections to this uniquely American war.

Research conducted by the Brigham Young University Saints at War project has so far identified at least 200 Latter-day Saints who served in the Civil War. Although most Saints sided politically with the Union, Latter-day Saints did serve on both sides.

One prominent example of a Latter-day Saint Civil War veteran is David H. Peery. A son of Virginia and therefore the South, Peery enlisted in the Confederate army the year the war started. He had already married a Latter-day Saint woman, Nancy Higginbotham, in 1852, although he wasn’t a fan of her faith. However, after her untimely death during the war, Peery investigated the Church and read the Book of Mormon. He found solace in the faith and was baptized.

Toward the end of the war, Peery moved to Utah and married his wife’s sister. He later became a successful businessman and a stake president in the Ogden area. A hotel in downtown Salt Lake City still bears his name: the Peery Hotel, three blocks south of Temple Square.

Once a Mormon Civil War veteran such as Peery has been identified, researchers still struggle to uncover the details of that person’s life and personality.

“Once you’re about three generations removed from historical events, it’s really hard to put flesh on the bones of those people,” said Robert Freeman, one of the lead researchers with the Saints at War project. He compared finding the Latter-day Saint connections to the Civil War to searching for a needle in a haystack, although “. . . through journals and other documents we can.”

In the course of his research, Freeman discovered a family connection of his own to the Civil War. He visited the site of the Battle of Gettysburg several years ago where his great-great-grandfather Alpheus Williams served as a Union general. Wanting to learn more, Freeman pursued some personal research of his General Williams.

“And so I began that process and succeeded eventually in learning that he actually had a book published of his letters home during the war,” Freeman said. The book is entitled From the Cannon’s Mouth.

Freeman also has a memento from his great-great-grandfather which brings the history of the Civil War to life for him.

“In my possession, I have a dictionary from my great-great-grandfather that he had on the battlefield at Gettysburg. I like to think that the spelling in those letters that I can now read in that volume was assisted by that dictionary.”

Freeman encourages Saints to take advantage of Civil War celebrations going on around the country this year as part of the 150th anniversary. Local historic foundations and Civil War associations are a good starting place to look for reenactments, exhibits and other commemorative events. Visit civilwar.org to find state-by-state listings of events.

And of course, family history is one great way to commemorate the Civil War no matter where you are in the country. Familysearch.org has several links to assist in the search for family connections to the Civil War and to learn more about prominent figures in the war such as President Abraham Lincoln or Abolitionist Harriet Tubman.

“Connecting with family who may have served in the Civil War or any conflict for that matter is a really wonderful kind of family history to take part in.”