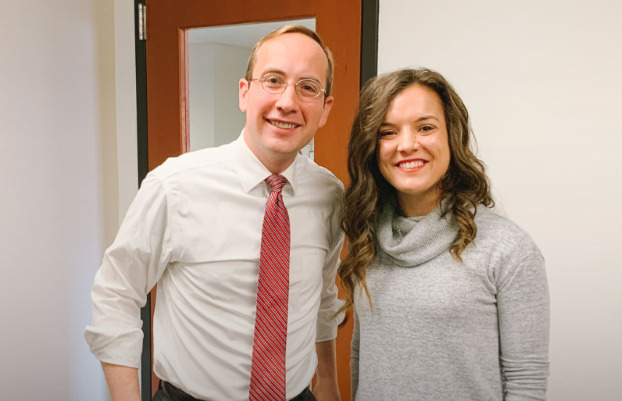 The Creation of One "Beautifully Consecrated Soul": How One Man Merges the Titles of Disciple and Scholar

It can be easy for us to separate versions of ourselves, depending with whose company we are in or the place we are inhabiting. This seems to be true, even more so, regarding the different ways we present ourselves in places of worship and academia, respectively.

However, Hal Boyd, former Deseret News opinion editor and current BYU law professor, seeks to remain the same 24/7: a scholar and disciple of Jesus Christ. It is something that he learned in Elder Jeffrey R. Holland's description of Elder Neal A. Maxwell who said: "The wonderful thing with Neal (and the thing I want for us) is that it didn’t have to come down to a choice between intellect and spirit. In a consecrated soul … they would be aligned beautifully, a perfect fit, a precise overlay.”

In this week’s episode, All In host Morgan Jones talks with Boyd about the merge of "disciple-scholar" and why we all should let our voice be heard in public discussions.

"When we walk out of our houses of worship, and we walk into an academic environment, if we are being genuine, we are the same person," Boyd says.

Morgan Jones: One thing I loved in an op-ed that you wrote for Desert News, you quoted Elder Holland, and Elder Holland was talking about Neal A. Maxwell, who was being recognized for his scholarship. And obviously this is after Elder Maxwell had passed away. But he says, "The wonderful thing with Neil and the thing I want for us is that it didn't have to come down to a choice between intellect and spirit and a consecrated soul. They would be aligned beautifully, a perfect fit, a precise overlay." And I think that's kind of what you all are trying to do, correct me if I'm wrong, but I think it's kind of showing that overlay of intellect and spirit and how those two things together can create like this beautifully consecrated soul. Would you agree with that Hal?

Hal Boyd: Oh, certainly. I think our President Abraham Lincoln, echoing the New Testament and Christ's words said, "A house divided, cannot stand." And so if we bifurcate ourselves, you know, here's my academic self and here's my spiritual self. Or here's my salsa dancing self, to throw a reference to Sean Spicer in there, and here's my, you know, business self. I don't think that is particularly healthy. I mean, I think we have different ways of presenting ourselves and different ways of communicating in different arenas and that's perfectly fine. But ultimately, we are one person. And when we walk out of our houses of worship, and we walk into an academic environment, if we are being genuine, we are the same person. And those beliefs inform the way that we read text, the way that we articulate our views, the way that we approach our scholarship. And it should inform all of those things for the better. It should make us better scholars, it should make us better advocates, it should make us better husbands and wives and teachers and community members and parents. And so I think it behooves us to allow faith to suffuse all that we're engaged in, particularly in the life of the mind. As we kind of talked about earlier, you know, the glory of God is intelligence. I think God wants us to have that marriage—that welding of the life of the mind and the life of the spirit, as they ultimately become one as he says, you have disciple-scholars, but in the end, the hyphens come off, and it's just disciple.

Morgan Jones: Yeah. One thing that I, well, I want to touch on a few things—if it's okay with you—that were written. Did you write this piece that kind of explains "Public Square?" That introductory thing?

Hal Boyd: Yeah, I was one of the writers.

Morgan Jones: Okay, so I'm going to talk as if you wrote it, but we will just go ahead and establish multiple people—

Morgan Jones: Perfect. Okay, so, you talked about a theologian who suggested that Christians lost the 1970s debate around abortion because they didn't participate sufficiently in the larger public conversation about sex and related topics. And thus, by "by seeding the terms of the debate the debate got framed in ways that made the failure of conservative Christianity a foregone conclusion." Into that kind of vacuum, it's been far too easy for terms of public conversation to be established in a manner that occasionally paints faith as incomprehensible or even threatening, rather than as an essential aspect of life for most of humanity deserving of studied consideration. Hal, why do you think it's important for us to engage in conversations surrounding these kinds of hot topics and what are the most important topics facing believers today?

Hal Boyd: So I think it's important to engage in these topics because the public square has traditionally been an arena where individuals come to exchange ideas and communicate, and exchange goods and all sorts of other things, but it has been the creator of norms. And so, Aristotle, the philosopher, Aristotle, talked about different kinds of knowledge and different forms of wisdom. And one of them he talks about is called "practical wisdom" or phronesis. And he says that individuals come to the city center, they come to the public square, they come to Athens in his world, and they engage with one another. And from engaging with one another, and learning of each other's stories and hearing different perspectives, we shape sort of public virtue. And those values, the public virtues are what we aspire toward. That's what we aspire toward politically, that's what we aspire toward personally. And so if religious individuals vacate that space, decide to stay home, whilst others are engaged in the public square, whilst others are having the conversations in the Athenian town square, then essentially, the part of defining virtue is lost. A part of defining what are our moral paragons is lost. A voice is missing in that discussion, in that virtue shaping. And so I would hope that we would all want to, in a reflection of Lehi's dream of partaking of this wonderful fruit from the tree and wanting to share it with others, that we want to go to the public square. And we want to say, you know, what we have something that is is remarkable and worthy of sharing and worthy of discussing and we want to be there, we want to participate, we want to be able to communicate that with others. And that will help shape, that will help frame the terms of the debate, I think in a way that will live in society, will improve society, will lift it, will "appeal to our better angels" to keep quoting Lincoln today. But I think that's why it's so vital, it's so important, why I care deeply about trying to encourage myself where possible to engage in the public conversation.

Morgan Jones: Yeah. So Hal, I imagine that some people are probably feeling like me right now where they're like, of course, you should engage in the public square because you are brilliantly smart, very articulate. I, on the other hand, kind of an idiot. And so I think that one thing that maybe keeps people from engaging in these conversations and participating, is that they may feel inadequate. What is your advice in how to better work to articulate our beliefs? How can we become better and more comfortable and confident in that?

Hal Boyd: Okay, well, first, let me dispel the notion that you're not articulate and shouldn't participate in the public square because that's not correct. But in terms of how individuals can participate, I would say, you know, the example of the master, of Jesus Christ, is a great, as as an all things, is our paragon here, the individual we should look to. And the way He communicated truths, the way He communicated His gospel and the things that are important, essential for us to participate in the Plan of Salvation fully and to live the Christian virtues. He did so in ways that were very applicable to the people of His time, and the audience to whom He was speaking. So He spoke in parables, He talked about sheep and oil and He talked about lilies and wheat and tears and things that were seeds, and were very applicable to the individuals of their time that these were germane topics to their lived experience. They were part of the cultural milieu in which they existed. An individual who was of the Philosophical class or the Lorilee class, or the governmental class, it was accessible to them as the pauper, as the person begging in front of the temple. And so He was able to communicate things that were widely discernible, and people could grasp them and use them. And there were layers to them, "those who had ears to hear," so there are multiple ways to understand them. So I mean, He is the true master in terms of how to communicate one's faith, how to communicate one's core beliefs. But I think each individual, you know, we don't all have the gifts of Jesus Christ—that none of us have the gifts of Jesus Christ. And so we have to look to what are our specific spiritual gifts, what are our unique ways? And for some people, that participation the public square may be their incredible gift of song or of, you know, of music, of playing the violin or the piano. For another person, it will be being able to articulate stories and parables and talk in narrative form. And then of course, there will be some who will maybe have the ability or the specific voice to be able to articulate beliefs in what we might traditionally think of as public discourse arena, in which there may be writing op-eds or essays or articulating their views on CNN or MSNBC.