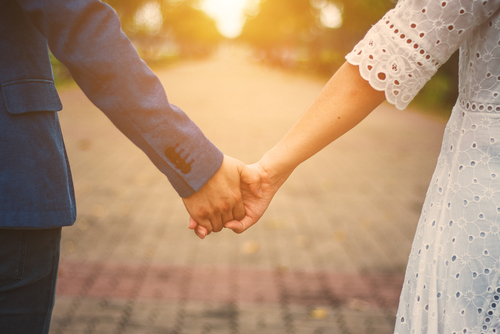 For several years now, we have collected hundreds of personal stories from young adults in the Church telling us how they were taught about sexuality. We are particularly intrigued by how frequently we are told by young people that their parents and Church leaders used object lessons to teach them about the law of chastity. Much can be learned from understanding the metaphors and messages that are intentionally—and unintentionally—expressed in these types of lessons.

► You'll also like: Healthy Sexuality and Chastity: 5 Ways to Teach Your Kids (Without Making It Awkward)

The “fear-based metaphor” label is not meant to imply that the parents, youth leaders, or seminary teachers who have used these object lessons were trying to frighten their young learners. In fact, we are confident that the individuals who used these types of object lessons were well-intending people who were just trying to impress an important concept upon the minds of their children or class members. Nevertheless, and in spite of the good intentions of the teachers, we have been told over and over again that such lessons caused most of the listeners to have feelings of fear and anxiety and to receive other unintended negative messages about sexuality. This is unfortunate, because the Lord has taught that “if ye are prepared, ye shall not fear” (D&C 38:30). He did not say, “If ye are fearful, ye shall be prepared.”

Fear-based metaphors typically compare sex to something being damaged or being made unclean. For example, a seminary teacher once showed a class a delicious, wrapped cupcake and asked if any of them would like to eat it. After many students enthusiastically said they wanted the treat, the teacher unwrapped the cupcake and had them pass it around. After each person had handled it, the seminary teacher asked, “Who would like to eat the cupcake now?” Of course, the point of the lesson was clear: the cupcake had become “unclean” and, therefore, undesirable. The instructor then compared the “handled cupcake” to the impurity of sexual involvement before marriage.

Another version of this type of object lesson uses chewing gum as the metaphor. In yet another, flowers were used: after all of the class members had touched the delicate petals, they soon wilted and turned brown. Again, the parallel was drawn that such inappropriate “touching” spoiled a beautiful thing, leaving it wilted and damaged. Another young woman told us about an object lesson that was used at girls’ camp. As the leaders and young women gathered around the fire (a genuine fireside!), a beautiful white wedding dress was brought out and held up as a symbol of being clean and pure on one’s wedding day. During the lesson, however, as examples of immodest and unworthy behaviors were discussed, portions of the dress were then cut out and thrown into the campfire.

► You'll also like: Lessons From Elizabeth Smart: How to Avoid Dangerous Pitfalls When Teaching Your Kids About Sex

A Negative Portrayal of Sexual Intimacy

One of the primary consequences of fear-based object lessons and metaphors about sexuality is a negative portrayal of sexual intimacy, often unintentionally conveying to young minds that sex is a bad thing that harms us. While sexual sin clearly has negative effects on our lives, fear-based object lessons typically don’t include a balanced discussion about the positive consequences associated with healthy sexuality.

It is quite clear that many parents and leaders like to use object lessons because it allows them to talk about sex—without talking about sex. If young people internalize these fretful emotions, such negative conditioning may have long-term consequences in later marriages when couples try to “re-program” their attitudes about modesty, sexuality, and intimacy inside their relationship.

Fear-based metaphors also tend to discourage an open dialogue between young people and their parents about sexuality. Often in this context, young people feel that if they ask questions or show any interest in the topic, they may be thought of as “bad” or “dirty.” Thus, we shouldn’t be surprised when young people gravitate to friends, the media, or other outside sources to learn about sexual issues—sources that are often not in harmony with gospel values. Their personal experiences learning about sexual matters then become mostly secretive, and they recall reading anatomy books, watching TV programs, or doing Internet searches under a cloak of secrecy, embarrassment, and shame. This, of course, is the opposite of what we should be striving for as parents.

Many young people have also commented to us that fear-based metaphors made them feel that there was no way they could repent of or repair any sexual missteps they may have already committed. Thus, some are left to feel that they are the damaged goods that no one—including their Father in Heaven—will ever want. These messages are particularly unhelpful to young people who have experienced sexual abuse or trauma and may mistakenly believe these metaphors are describing them. Our children need to be sincerely taught “that Jesus Christ is the Great Healer of our souls. . . . There is no sin or transgression, pain or sorrow, which is outside of the healing power of His Atonement” (C. Scott Grow, “The Miracle of the Atonement,” Ensign, May 2011).

► You'll also like: What We're Often Missing When We Teach Youth About Sexual Intimacy, Modesty, and Virtue

“Abstinence-based” metaphors convey a “worth-waiting-for” message to young people, in which sex is portrayed as a positive aspect of life when experienced within the context of marriage. For some reason, many abstinence-based metaphors involve desirable food.

For example, a counselor in the bishopric once brought freshly baked chocolate chip cookies to a combined youth lesson about chastity—on a fast Sunday. As the aroma of the cookies spread throughout the room, he asked the youth if they would like to eat one. After they eagerly indicated they would love to have one of the cookies, the counselor reminded the group that it was fast Sunday. After their groans had subsided, the counselor compared waiting to eat the cookies at the right time to waiting until marriage for sex.

Another young man told us about his deacons quorum adviser, who gave each young man two chocolate candies and told them, “If you bring these chocolates back next week, I’ll give you ten chocolates.” So the following week the boys who brought their candies back were rewarded with the promised ten chocolates. You can see where the adviser was going with this, right? At the end of the week, the adviser used the example to teach the boys that delayed gratification brings bigger rewards and greater satisfactions compared to immediate gratification, and encouraged them to wait for the “bigger treat” that awaits them in marriage.

Now, you may be wondering what is so wrong with such abstinence-based metaphors. Despite their appealing images, the flaw with these object lessons is rooted in what they fail to teach rather than in what they do teach. They are only partially correct, because they are incomplete metaphors.

► You'll also like: The Conversation This Marriage Counselor Had with Her Future Son-in-Law About Sexual Intimacy (+ What All Mormons Can Learn from It)

Chastity is Viewed as Simply a Physical Issue

One of the primary pitfalls of abstinence-based lessons is that they unintentionally imply that chastity is simply a physical issue. The focus is on just sexual behaviors and the timing of such behaviors. While behaviors are an important part of the law of chastity, they are not the heart of the law. Chastity and virtue are at the heart of the law, thus making it more of a spiritual issue that should first be embraced in our hearts and our minds before it is expressed in our behaviors.

Unfortunately, abstinence-based object lessons tend to assume that all sexual expressions after marriage are inherently loving in nature—simply because they take place after a wedding. What is also not taught is that attitudes and motives regarding why spouses seek sexual union with each other can change, and thus these become the true indicator of whether sexual behaviors are chaste or not. We may be chaste both before and after we are married; we may also be unchaste before or after marriage, and actions alone do not determine the difference.

Simply put, the whys of sex in marriage matter more than the whats of sex. Chastity isn’t just about when sex happens; it’s about why it happens. We hope that in marriage, sex will be shared for the right reasons, but that requires a deeper and fuller understanding of healthy sexuality—one in which spouses are never compared to a cookie!

► You'll also like: A Powerful Letter to Young Mormons About Sex and What They Need to Understand

Chastity is Viewed Simply as an Individual Issue

Abstinence-based perspectives also tend to portray chastity as a character trait that one earns as a result of wise personal choices and worthiness. But a deeper appreciation of chastity is found in relationship between two people. Chastity is relational in nature because sex is designed to be an experience that involves another and can thus convey either other-centered love or self-centered lust. When sex is compared to one person eating something such as food or candy, it implies that true sexual fulfillment comes from receiving, not from giving. Thus, the sharing and other-centered aspects of sexuality are missing, and these are the key components that are vital in building a healthy and intimate marriage.

We need to help our children understand that the divine purpose of sexual intimacy is to unify spouses and strengthen the marital bond; we are not simply to be chaste for the sake of being chaste. Intimacy is connected to “shared vulnerability,” in which people reveal themselves to each other and feel nurtured and cared for in their interactions. This type of revealing happens in relationship where partners can talk, share, and disclose to each other as well as be physically close with each other. So, when we talk about sexual intimacy and chastity, we should think about relationship behaviors broadly—not just the physical behaviors typically defined as personal rules or standards.

You may be thinking, What, then, is an appropriate object lesson to use? What would be the best metaphor to properly teach about sexuality? Our counter-culture answer to this question is that the best object lesson is no object lesson! Even if someone comes up with a clever object lesson that seems to get past the pitfalls of fear-based and abstinence-based metaphors, using any object lesson still conveys that as a parent or youth instructor you are uncomfortable with directly addressing the topic of sexuality.

We are repeatedly told by young people that their great wish is to have their parents and leaders simply talk to them openly—and thoroughly—about sex. In short, there is no adequate metaphor with which to compare sex because sex is the metaphor! So instead of asking, “What parts of life may be compared to sex?” we should ask, “How does sex help us better understand other parts of life?”—especially in our discipleship and faithful progression as individuals, couples, and parents. 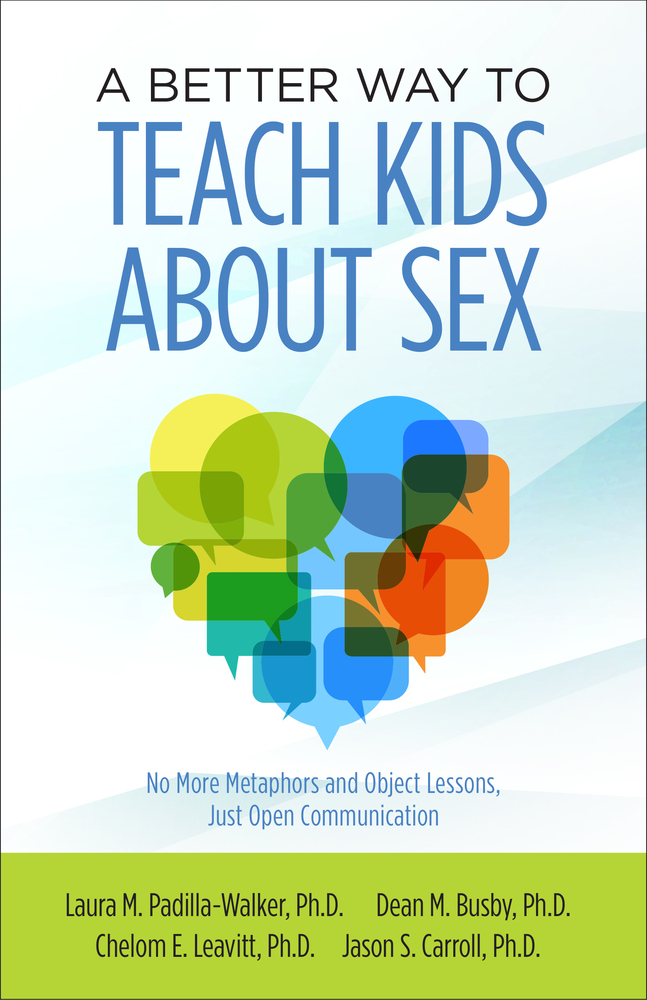 To learn more about teaching youth about sexuality in a way that is healthy and doctrinally sound, check out A Better Way to Teach Kids About Sex, available at Deseret Book stores and deseretbook.com.

For generations, parents and leaders have had the best of intentions when teaching children and youth about sexuality and the law of chastity. Despite meaning well, many parents have lacked the essential tools and knowledge needed to arm their children to navigate their own sexuality and prepare for a marriage that includes a healthy and joyous view of sexual wholeness.

This guide for parents is a scientifically informed LDS perspective on how to talk with children in an open and faith-based way to help them build a foundation of communication and trust, understand the physical body, and gain a healthy approach to sexual wholeness.