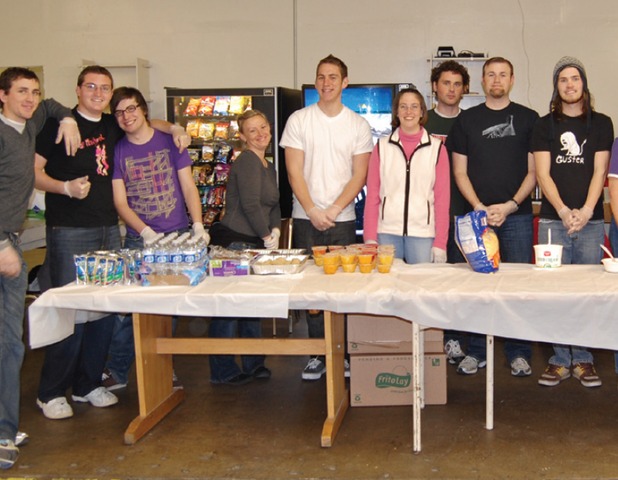 With 700 potatoes, several gallons of chili, and a love of service, Lindsay and Ryan Taylor, Lesley and Isaac Bickmore, and a few friends and strangers served 350 homeless men in November 2009. Since then, the Taylors and Bickmores named the project the Down-N-Out Diner and have organized, collected, and served food once a month to groups of 200–350 homeless and needy people in the Salt Lake City area. The Down-N-Out Diner’s meals have not only filled the diners’ stomachs, but the volunteers’ hearts as well.

Ordering Up Some Service
In July 2009, Ryan and his wife, Lindsay, decided to start serving the homeless and needy in their community. They didn’t have to look far to find an idea for how to serve; Ryan’s mother, Liz Taylor, and her Relief Society had been serving meals for the needy since December 2008. With a sign-up sheet and some organization, the Taylors copied Liz’s idea in their own ward.

“Really, the whole principle behind it is to get a lot of people to donate a small portion each, and it builds a home-cooked meal for those who have fallen on hard times,” says Ryan Taylor, a law student and graphic designer.

Although their first attempt didn’t go as well as planned, the Taylors didn’t give up. Banding together with their neighbors the Bickmores, the two couples collected food donations and volunteers from their West Jordan, Utah, community. They successfully fed 350 homeless men in November 2009.

Although both the Taylors and Bickmores had young families and busy lives, the young couples decided to make their service a more permanent fixture within their community because of their desire to be a change for good in their com-munity. “There are a lot of problems in the world. One of them is definitely homelessness and [lack of] food, but we can do something about it now,” Ryan says. “Part of it is just doing what I already believe. It’s acting upon what I think the world should be like.”

So what began mostly as a service project for the couples’ LDS ward has since expanded to include the West Jordan community as well. Lesley Bickmore, a former schoolteacher and a mother of one, expecting another child in December, has noticed how the Down-N-Out Diner allows community members to serve without the pressure of being affiliated with a church. Without this pressure, more people have gotten involved, from donating food and supplies to volunteering their time.

For Isaac Bickmore, a music teacher at a K–8 school in the Salt Lake City School
District, the effort helps satisfy a yearning to serve that was jump-started by the movie The Soloist and John Grisham’s book The Street Lawyer. “Both the book and the movie made me feel like there is so much that can be done that doesn’t take a lot—so many everyday needs,” he says. “You go through life and feel like you’re not making a difference, but you can tell you’re helping somebody when you do this.”

From the Kitchen to the Table
The Down-N-Out Diner’s affiliation with a local shelter called the Road Home allows volunteers to do more for the needy than just providing meals for them.

“The reason feeding the people there is helpful . . . [is because] every hour we log is a volunteer hour that the Road Home can log,” Ryan explains. “It helps them get more funding that helps them on their wider goal of getting people into homes.”

Before the volunteers get to the Road Home, they sign up on the Down-N-Out Diner’s Facebook page or blog to donate food, time, or both. Whether it’s a salad for 20, four boxes of Capri Suns, or two hours of serving time, the Down-N-Out Diner posts needed items two weeks before the dinner takes place. After signing up, volunteers are then e-mailed about when to meet to help serve or where to drop off food, which varies depending on whether it is perishable, whether it needs to be heated or cooled before serving, and who has volunteered as a “drop-off point” that month.

After all the food is collected and the volunteers are congregated, Lindsay says the excitement builds for both those serving and those being served, with men and women lining the halls of the Road Home, waiting for their meals.

“We’ve had a goal every month: this is how many people we want to feed this month and this is how we’re going to do it, and it always works out,” she says. “Most months we have so much leftover food that we can take it to another shelter and feed another group.”

Although many people think of the needy during the holiday season, there is a high demand for meals all year long. “I think they actually get a lot of food during the holidays,” Lesley says. “It’s during the off-season that people forget about them. I guess that’s why it’s fun to do it year-round.”

Soul Food
“I often think of the scripture that says, ‘Are we not all beggars?’” Lesley continues. “And really, if we can help someone else, I feel like the Lord will help us more in our needs.”

The Taylors moved from Utah at the end of the summer, but they plan on continuing to serve the homeless on the East Coast while helping others learn how to organize meals as well. Before they moved, though, the Taylors set up a system so their neighbors could continue serving.

Through their blog, thedown-n-outdiner.blogspot.com, the Taylors hope to help others avoid a “crash course,” as Ryan puts it, in learning how to serve the homeless. Ryan says the blog “takes care of most of the leg-work” for new volunteers through pre-made menus, phone numbers, and other helpful information.

“[People] can go to our website, pull up a sign-up sheet, and print it off. It has all the information and all the tools so that they can organize a dinner quickly and easily,” he says. Those interested in volunteering, donating food, or learning about how to serve in their own community can also visit the Down-N-Out Diner page on Facebook.

Feeding the homeless “makes you realize it’s those little things that can mean so much to somebody,” Lindsay says. “Every experience, you come back with a great memory.”