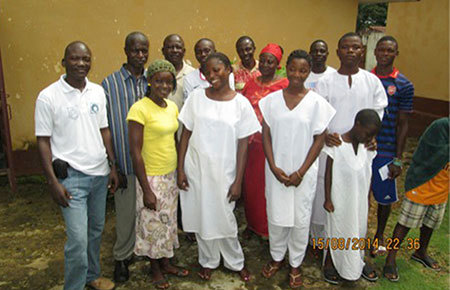 The Ebola Outbreak: How Saints in Sierra Leone Found Life Again in the Gospel

MR says: Even after war and ebola ravaged their lives and land, the Saints in Sierra Leone were left with the hardest task of all, rebuilding their lives. Learn about their incredible journey.

How would the Church survive if your country, still recovering from civil war, became infected with a deadly virus and then was isolated from other nations because of that disease? What would you do if missionaries, other than local missionaries, were withdrawn, not just once but repeatedly?

If you lived in the West African nation of Sierra Leone, you would rely on the Lord and watch the Church flourish anyway. You would see local leaders magnifying their callings. You would see members strengthening each other, missionary work continuing, and faith overcoming fear.

Despite civil war from 1991 to 2002, Sierra Leone has seen steady growth in Church membership. Full-time missionaries first arrived in this sub-Saharan country in May 1988. Two years later a district was created. At various times in the 1990s, missionaries were withdrawn because of the war, but local members kept the Church going and growing. In 2007 the Sierra Leone Freetown Mission, which included Liberia, was created. Then in December 2012, Elder Jeffrey R. Holland of the Quorum of the Twelve Apostles organized a stake in Sierra Leone’s capital city, Freetown. It was the 3,000th stake of the Church.

“When the missionaries were gone, we worried about being left to find our own way,” said Kenema District president Jonathan Cobinah. “However, that same week we received a letter from the Africa West Area Presidency reassuring us that would not be the case.” From that time forward, the 13,000 members in Sierra Leone received area support, and as international organizations geared up to provide relief, Church Welfare Services and emergency response worked with implementing partners in various international organizations to meet community needs.

To learn more about the trials and struggles of missionaries in Liberia, check out Freetown, a thrilling and inspiring story of hope and survival based on true events.

Caught in the middle of a brutal civil war, six Liberian missionaries in Monrovia flee the widespread violence of their native country. Their destination: Freetown, Sierra Leone. With the help of local Church leader Phillip Abubakar, the missionaries make the difficult journey only to have their troubles compounded by a rebel fighter bent on killing one of their own.