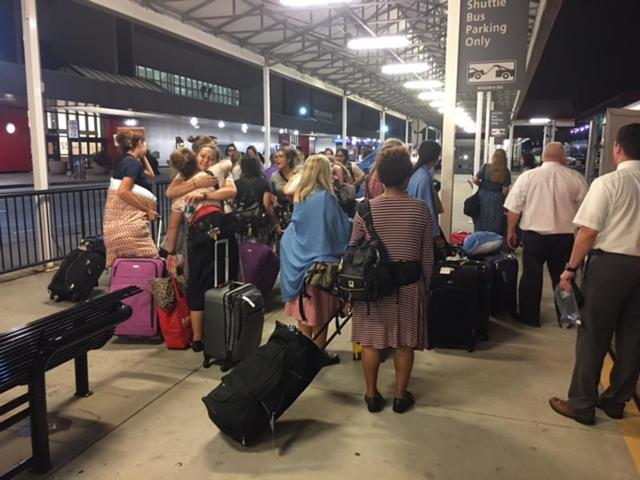 The Emotional Story of Mormon Missionaries Airlifted Out of Puerto Rico

"It was honestly one of the hardest things to hear in my life," Sister Paget said, talking about learning she was going home. "There were lots of tears. I was almost a little bit hysterical. 'I cannot go home yet.' But one of my former companions said, 'You know, it's not often you can know an apostle looked at your name and felt the Lord was pleased with your efforts on your mission and felt it wasn't necessary for you to go to another mission for two months."

A direct hit by Hurricane Maria first decimated Puerto Rico. Now it is scattering the Mormon missionaries of the Puerto Rico San Juan Mission all over the United States.

LDS Church leaders decided Friday to evacuate all 155 missionaries and reassign them to Spanish-speaking missions from Fort Lauderdale, Florida, to Yakima, Washington. The final 118 missionaries arrived in Miami on Tuesday evening, according to Andrea Wilde Lutz, whose parents were serving in Puerto Rico as senior missionaries.

"We all felt heartbroken, completely heartbroken, to leave our island and the people that we loved," said Eliza Turner, 20, one of 36 women evacuated to Atlanta on Saturday. A single elder made it to Atlanta, too. On Sunday, Turner flew home to Idaho Falls, Idaho, one of six sent home early because she had just weeks left on her 18-month assignment.

"No one complained," Turner said, "but it was really upsetting. It's very painful."