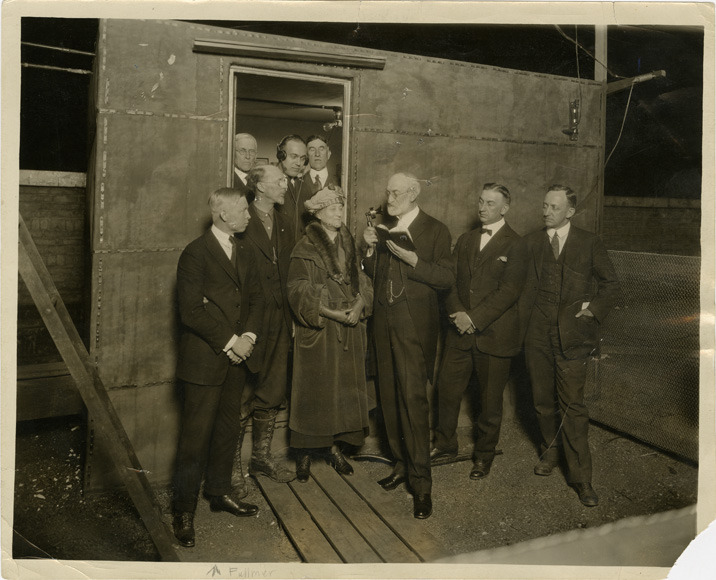 In March 1922, the Improvement Era carried a short article by editor Edward H. Anderson about the exciting possibilities of the newly invented vacuum tube amplifier – those glass tubes seen inside antique radios and other early- to mid-20th century gadgets. Such tubes amplified electric signals to such an extent that for the very first time, the human voice could be heard by telephone from one coast to the other. Why, Bro. Anderson wrote, “It is not impossible that, by 1925, or sooner, the President of the Church of Jesus Christ of Latter-day Saints may be able to deliver his sermons in the Salt Lake Tabernacle and be heard by congregations assembled in every settlement of the Church from Canada to Mexico, and from California to Colorado.”

Two months later, on Saturday, 6 May 1922, the next step in fulfilling that prophecy took place as a small group of men and women gathered on the roof of the Deseret News Building on Salt Lake City’s South Temple street, to inaugurate radio station KZN – now KSL. This post is an attempt to reconstruct that initial broadcast, the earliest known broadcast of LDS teachings. (The Deseret News had, however, been broadcasting a nightly 9:00 newscast since 22 November 1920, using the facilities of station 6ZM; no record exists of their having broadcast Mormon content.)

At 8:00 p.m., Nathan O. Fullmer, business manager of the Deseret News, stepped to the microphone. Nate had worked for months with engineer Harry Carter Wilson to build a transmitter from scratch (AT&T’s monopoly on the sales of transmitters made purchasing a transmitter too expensive for either the newspaper or the Church), and he opened the program with this announcement: