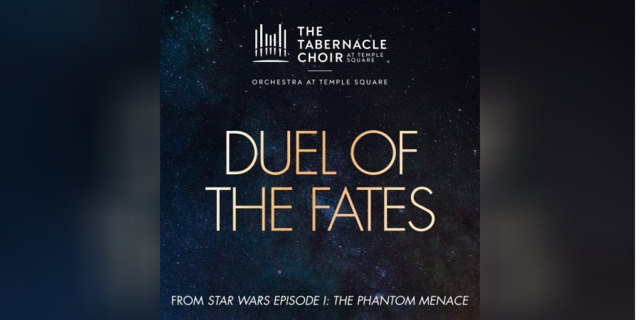 A new song from the Tabernacle Choir at Temple Square transports listeners to a galaxy far, far away.

“Duel of the Fates” is known to Star Wars fans as the soundtrack to the final lightsaber battle between Qui-Gon Jinn, Darth Maul, and Obi-Wan Kenobi in Star Wars Episode I: The Phantom Menace. Just in time for Star Wars Day on May 4th, the song is now available for streaming from Spotify and Apple Music.

According to the Choir's blog, “Its lyrics are based on a fragment of an archaic Welsh poem, Cad Goddeu (Battle of the Trees), which John Williams then had translated into Sanskrit, an ancient Indian language.”

“Duel of the Fates” is one of five songs on the Choir and Orchestra’s EP recording, When You Believe: A Night at the Movies. The full album will be released on May 22, 2020, with the following songs from award-winning movies:

“The Choir and Orchestra have a longstanding tradition of performing inspirational music from the Broadway stage and the movies,” director Mack Wilberg said in a press release sent to media. “We hope to showcase the power of this music to inspire and to encourage us. The title, When You Believe, captures that concept of building faith and shows why it was fitting for the Choir and Orchestra to record this music. This music can touch our souls in a very unique way. We also hope this recording will open doors to those who have yet to experience the music of the Choir and Orchestra.”

► You may also like: Sleek New Tabernacle Choir Logo with Special Symbolism Released

Lead image: Courtesy of The Tabernacle Choir at Temple Square

The Tabernacle Choir and Orchestra at Temple Square present a collection of beloved songs from the silver screen. Celebrating uplifting melodies, positive stories, and the inspiring imagination of great filmmakers in recent years, the 360-member Choir and full Orchestra breathe new life into these arrangements like nobody else can. Hold on to your seats for an exciting journey through timeless melodies, epic soundscapes, and an awe-inspiring tour de force of musical talent. Available now for pre-order at deseretbook.com.