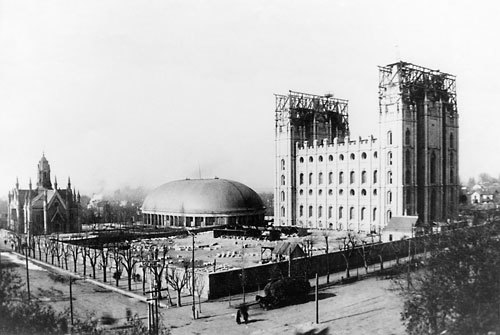 The General Conference That Lasted an Entire Month

General conferences in the early days of the Church were not known for their conciseness or brevity. In 1867, the first general conference in the Tabernacle on Temple Square (which was still under construction at the time) began on a Monday and included a diverse range of topics, including the need to educate women about business so men could focus on agriculture and construction.

Because of the breadth of subjects the conference would cover, President Brigham Young asked that speakers give short sermons. Even with the prophet's counsel, the conference lasted three days (George W. Givens, 500 Little-Known Facts in Mormon History).

The 1872 semi-annual general conference began the first weekend of April, but it didn't officially conclude until the end of the month.

In January of that same year, Territorial Judge McKean placed President Brigham Young under murder charges brought against him by one of his former bodyguards, Bill Hickman, who had been excommunicated from the Church in 1868 (George W. Givens, 500 Little-Known Facts in Mormon History). Although the charges were later dismissed and nothing became of the case, President Young was still under house arrest and unable to attend general conference in April.

Under the direction of President George A. Smith, general conference began as usual, but President Smith chose to hold "the conference over week after week until Brigham was released on a writ of habeas corpus on April 28. The president was then able to personally attend and give his people his blessing" (George W. Givens, 500 Little-Known Facts in Mormon History).