The Giving Tree: How This Mother-Daughter Duo Shared the Gospel without Leaving Their Front Yard

There's a certain magic to Christmas cheer that some wish for all year long—the lights, the decorations, the presents under the tree. For Arizona residents Cathy and Sara Konopnicki, spreading cheer to those in quarantine was on their to-do list, holiday or not.

After their Facebook friends decorated trees with lights to boost people’s spirits during the pandemic, Cathy and her daughter Sara decided to do the same. Not only did Cathy decorate the olive tree in her front yard with Christmas lights but she also felt inspired to play Santa Claus.

Cathy began hanging small gifts on the tree such as books, candy, and stuffed animals. Dangling from every limb was a small present with a short gospel message attached. 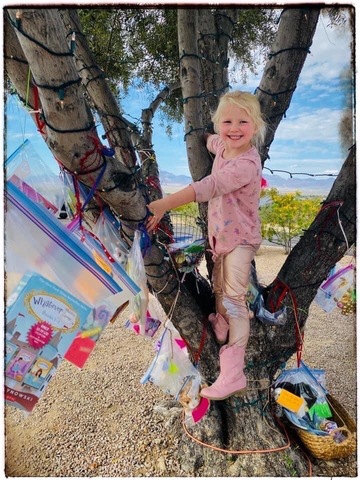 “I got this impression that I needed to hang gifts on the tree . . . I started putting gifts—books for both kids and adults—in plastic bags with a ribbon,” Cathy explains. “Then I felt that I should put an inspirational message with the presents on little cards. I got out the scriptures and if it was for an adult, I would [write] a scripture or a quote from a prophet. If it was for a child, I would draw a smile and write ‘Heavenly Father loves you.’”

In homage to the Shel Silverstein’s classic book, Cathy named her decorated tree “The Giving Tree.” She then posted photos online of her tree and invited all to come and take a gift.

Word quickly spread and people began visiting Cathy and Sara’s “Giving Tree,” each taking a present and posing for a photo. The tree was not only a fun way to spread the gospel, but a way to uplift people’s spirits while practicing social distancing. 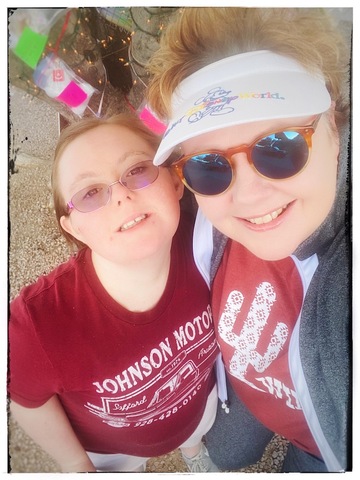 “The reason I created the tree was [because] I thought it would give families or mothers something to do where they are not coming in contact with people,” Cathy says. “When some of the people got out of the cars, you could just see the weight of this quarantine, but when they saw the tree, the burden would lift.”

Cathy planned to keep the Giving Tree going for three weeks but felt an impression to extend it to a month.

“I had this impression that somebody who hasn’t visited the tree, who needs to come, will stop by,” she says.

During the fourth week of the Giving Tree, Cathy received a message from a mother who had visited the tree with her children. In the message, the mother explained that her daughter had recently felt depressed. While visiting the Giving Tree, the daughter had chosen a book on happiness. The mother told Cathy that her daughter immediately began to feel uplifted and she was so grateful they had been able to visit the tree. 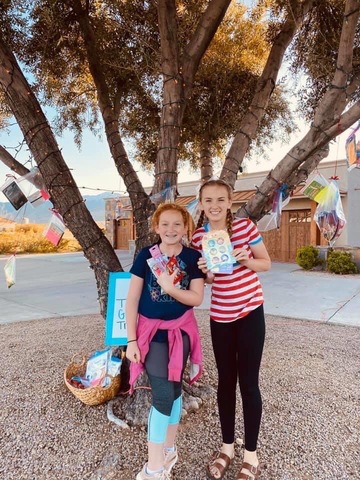 “After receiving that message, I thought that maybe this was the reason for the tree. Here was somebody that it had made a difference for,” Cathy explains.

Not only did the Giving Tree help people within the community but it also allowed Sara, an individual with Down syndrome, to interact with her friends and meet new people.

“People who have previously visited are bringing back their children to give things. A lot of people have said, ‘I want my children now to see how they can help other people.’ So many people wanted to give back, and donations for the food bank seemed right,” Cathy says. 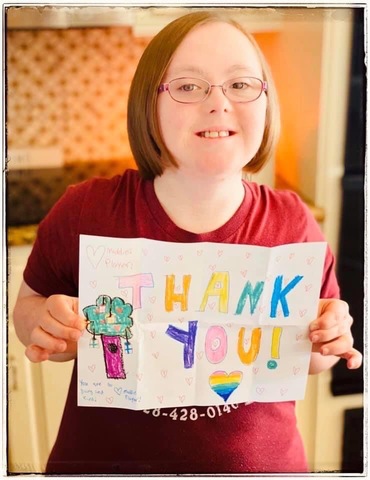 When asked what this tree meant not only for the people in the community but also for Cathy and Sara, Cathy replies, “It was such a blessing in our lives, and I know that because of the reaction people had that they really appreciated it all. I think I was inspired because I know that if somebody has something they can look forward to, it just helps relieve some of the anxiety and stress people are feeling about this virus [COVID-19].”

Cathy expanded on the gratitude she feels for acting on her prompting.

“One of the strongest things I’ve always had is my testimony of personal revelation and the Holy Ghost. I have tried to listen to Him because I know how important it is. When I look out at that tree, I know that I was supposed to put gifts on there. I know that Heavenly Father wanted me to do that.”

Cathy continues, “I know this was a way to help people see that other people are kind and giving. It’s a struggle that a lot of people are going through, and it’s a scary time. I just feel like Heavenly Father wanted to let us know we are all there for each other.”

All images courtesy of Cathy Konopnicki