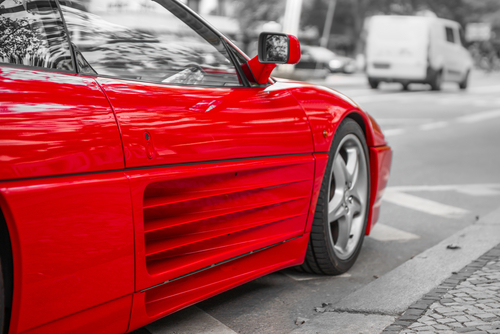 The Gospel Lesson a Damaged Ferrari Taught Me

While I was serving as the Scout Master in our ward, our troop was creating a movie to earn the Cinematography merit badge. We needed to film one of the scenes with a luxury car. One of my neighbors had two beautiful Ferraris, so I arranged with him to film the scene at his home.

My son Mitchell, who was five at the time, came with me for the filming and was to have a part in the scene. We were in my neighbor’s garage, and he was showing me the pictures on his “wall of fame and shame (crashes)” of his various vehicles. As we were looking at the pictures, we heard a crash and turned around to see a chair on the hood of the red Ferrari. In front of the Ferrari was a raised workbench area with a chair on wheels. My son had accidentally knocked the chair off the workbench platform onto the hood of the Ferrari.

My son ran and hid behind one of our friends who was with us, who later told me my son’s heart was beating extremely fast as he waited to see what would happen next. The garage was silent as all eyes were on my neighbor waiting for his response. My neighbor could tell my son was frightened and looked toward him and said, “Don’t worry about it. That is why they make paint; I will be able to have it fixed.”

When we arrived home after filming, I told Mitchell that even though it was an accident, he was still responsible for the damage that he had caused to our neighbor’s Ferrari, and he needed to give all his money to our neighbor to help pay for the repair. My son didn’t like this idea and began to cry, saying, “I don’t want to lose all my money.” I explained to him that when we damage something that is not ours, we have the responsibility and duty to pay to repair the damage. His crying continued as I had him take all the dollars and coins out of his savings jar and put them in an envelope for me to take to our neighbor.

I tried to get Mitchell to go with me to deliver the money, but he refused to go. I returned to my neighbor’s home and explained my desire to pay to have the Ferrari repaired. I handed him the envelope and told him that my son had emptied his savings and that I had also enclosed a signed blank check to cover the cost to repair the damage. My neighbor handed me back the envelope and said, “You are a man of honor, but I can’t take this.” I replied, “I am responsible for the damage and I want to pay to fix it. It’s not fair for you to be responsible for it.” My neighbor then explained that he would be able to have it repaired, and that I did not need to worry about it. He then said, “I view it as a gift.”

I thanked my neighbor for his kindness and gift and returned home relieved that I did not have to find out how much that blank check would have cost me. When I got home I put the envelope in my closet and did not give Mitchell back his money. I wanted to teach my son to stand to his obligations like a man.

About a year later, I was writing a chapter for one of my books on grace. I was writing about how one of the difficulties we have with grace is that it is not fair. We often have a hard time accepting Christ’s forgiveness and grace, because we don’t deserve it. But that is the whole point of grace. Christ is giving us something we do not deserve. If we deserved it, it would not be grace.

As I wrote, I recalled the incident with my son and the Ferrari. I had been guilty of that very thing. I was so focused on teaching my son about fairness, justice, and the consequences of his actions that I missed a wonderful opportunity to teach him about grace and forgiveness.

At our next family home evening, I gave a lesson on grace. I asked Mitchell if he remembered the incident with our neighbor’s Ferrari. He put his head down and said, “Dad, I don’t want to talk about that.”

I responded, “Mitchell, I never told you what happened when I went to the neighbor’s house with your money. When I offered to pay to repair the Ferrari, he would not accept our money. He said he would have the Ferrari repaired and that he viewed it as a gift.”

I then handed the envelope to Mitchell which contained his money. His eyes lit up as he counted the dollars and the coins. His sadness and pain was quickly replaced with joy.

Elder Neil L. Andersen said in his talk, "Repent . . . That I May Heal You," “Being disciples of Christ, we rejoice in the blessing of repenting and the joy of being forgiven. . . Divine forgiveness is one of the sweetest fruits of the gospel, removing guilt and pain from our hearts and replacing them with joy and peace of conscience.”

My neighbor extended forgiveness and grace to me and my son. He agreed to pay for the damage to his Ferrari that we were responsible for. Likewise, Christ has paid the price for our sins so we do not have to. Through Christ’s grace, we can be forgiven and avoid paying the penalty for our sins. The Lord declares, “For behold, I, God, have suffered these things for all, that they might not suffer if they would repent. . . Which suffering caused myself, even God, the greatest of all, to tremble because of pain, and to bleed at every pore, and to suffer both body and spirit” (D&C 19: 16, 18) Christ has already paid to repair the damage each time we metaphorically scratch a Ferrari with sin.

Just as my neighbor lifted the burden of payment for the damage to the Ferrari, so has Christ lifted from us the burden of sin through His atoning sacrifice in the garden of Gethsemane and on the cross. The Lord declares, “Though your sins be as scarlet, they shall be as white as snow; though they be red like crimson, they shall be as wool. . . . I will forgive . . . and I will remember [your] sin no more” (Isaiah 1:18; Jeremiah 31:34)

When I sin, I am at times initially hesitant to go to the Lord and ask for forgiveness. I have a natural tendency to want to hide as Mitchell did after he scratched our neighbor’s Ferrari and as Adam and Eve did after they partook of the forbidden fruit. Moses 4:14 reads, “And they heard the voice of the Lord God, as they were walking in the garden . . . and Adam and his wife went to hide themselves from the presence of the Lord God.”

When I sin, Satan and the natural man work to convince me that if I go to the Lord with my sins, the response from the Lord will be one of disappointment, condemnation, and alienation. Satan will put thoughts into my head such as, “You screwed up again. Do you really think the Lord will forgive you for the 432nd time? You are a failure. You are never going to change so why try? Just give up.” Or “Hide so you do not have to experience the disappointment and wrath of the Lord.” You think I would have learned both from previous encounters with the Lord seeking forgiveness and from examples in the scriptures that this would not be the case. The scriptures are filled with stories of Christ’s mercy and forgiveness. The prophet Nehemiah describes Christ as “A God ready to pardon, gracious and merciful, slow to anger, and of great kindness” (Nehemiah 9:17).

Nevertheless, I still find that I have to fight the tendency to hide my sins from the Lord. Eventually, I get up the courage to go to the Lord in prayer and ask for forgiveness again. Each time I petition the Lord in prayer for forgiveness, I am overwhelmed by His outpouring of love, acceptance, and forgiveness. Moroni 6:8 reads, “As oft as they repented and sought forgiveness, with real intent, they were forgiven.” And in the Doctrine and Covenants the Lord declares, “He who has repented of his sins, the same is forgiven, and I, the Lord, remember them no more” (D&C 58:42).

As we repent and petition the Lord for forgiveness, we will hear the glorious words of the Savior, “Be of good cheer; thy sins be forgiven thee” (Matthew 9:2).

Cameron C. Taylor is the author of The Way of Aloha: Lanai. The book isavailable at Deseret Book. Best-selling author Cameron C. Taylor masterfully weaved ancient Hawaiian history and culture into an inspiring and engaging story set on the beautiful island of Lāna‘i. You will be transported to a tropical paradise for an adventure of a lifetime. As you visit sacred locations throughout the island, you will be taught by a Hawaiian kahuna the principles for joyful living. You will see why Hawaii is consistently ranked as the least stressed and happiest place in the world. As a member of The Church of Jesus Christ of Latter-day Saints, the Hawaiian kahuna unfolds powerful insights into the gospel of Jesus Christ as he illuminates a more excellent way—the way of Aloha—the way of Zion. Learn the principles to create your own island paradise where ever you are. Paradise is not a location. It is a way of life.

Makes You Think Lesson Love Grace AtonementLesson,Love,Grace,Atonement,Makes You Think
Comments and feedback can be sent to feedback@ldsliving.com