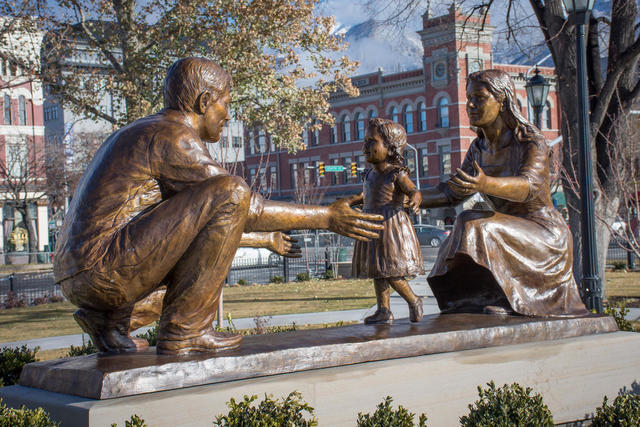 Have you ever noticed the statue on the north side of the Provo City Center Temple grounds, the one with the little girl walking from the arms of her mother toward the arms of her encouraging father? The moment I first saw that statue, my heart somersaulted and I was flooded with a sense of home. It was the same sculpture I had seen many times growing up in my home—one I always viewed with a tragic sense of beauty. 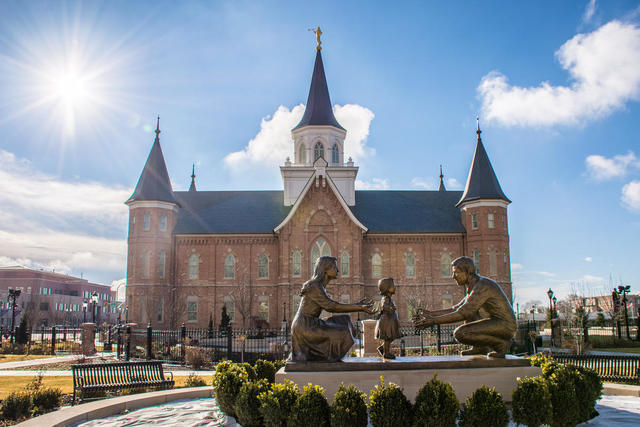 That statue, captured in white porcelain, had been given to my parents when my sister died after a freak accident in 1989. She was a few months shy of 2 years old. To me, that little girl caught in between two loving parents symbolized my sister and the hope that one day I would meet and know her. But the association went deeper than that. Having not been born when my sister died, I never met her but instead grew to know her through stories. In my imaginative mind, that little girl in the statue was my sister Rachel. The statue had been created of and for her and my family. 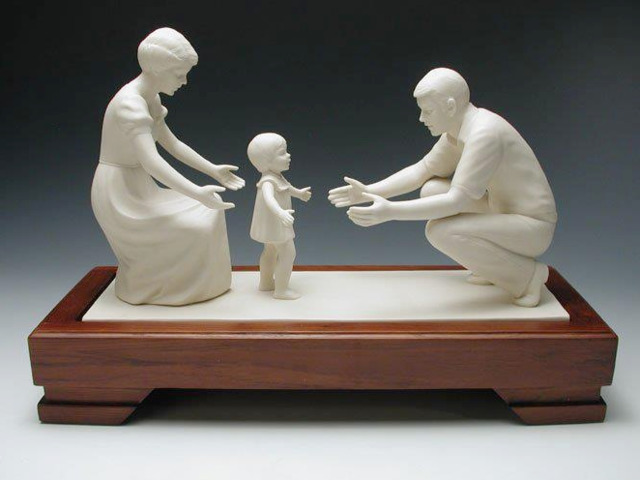 When I saw that statue again at the temple, its significance only deepened, and I caught my breath. To me, it was like seeing my sister alive for the first time. Rachel was there with me at the temple that day.

Little did I know my own story would soon become interwoven with many others. Shortly after that temple visit, I stumbled across a story that described the heartbreakingly beautiful origins of this statue.

On July 14, 1976, Keith and Teri Wilson welcomed a baby girl, Melissa, into their family. The Wilsons brought Melissa to their home in Alpine, Utah, mere blocks away from where I grew up.

A few months after Melissa's birth, a fellow ward member, friend, and renowned artist Dennis Smith asked the family if, when Melissa began to walk, the family would be models for him for a new statue he had been commissioned to create for the Church's Nauvoo Monument to Women. The Wilsons readily agreed.

But shortly before Dennis began sculpting the piece, on January 10, 1977, the Wilsons discovered that Melissa had cerebral palsy. Melissa would never walk.

In an article for the Deseret News, Dennis wrote about this experience:

"I had wanted to call [the statue], 'Melissa Walks.' But suddenly that image was filled with painful irony. . . . When it came time to work on the large sculpture, I had them come to the studio and bring Melissa with them. By this time, she had been outfitted with body braces just to hold up her head. Her muscles were becoming stiff and atrophied, and neighbors were coming in every day to help Teri with the physical therapy.

"The air was filled with a terrible tenderness, and though I was hesitant about it, I went ahead and told them about the title I had wanted the sculpture to have."

While the Church decided to use a more universal name for the sculpture, In The Family Circle, Dennis and the Wilsons have always known the statue as Melissa Walks.

Though Melissa could not walk in reality, the love of friends and family immortalized her walking through eternity. This statue embodied the hope and doctrine that what was taken from Melissa and the Wilsons in this life would be gloriously restored in the next, just as it had always whispered the sweet promise to me that I would be able to see my sister someday. The potency of that message hit me so profoundly, I knew I had to meet Dennis and the Wilsons in person.

Dennis, Keith, and Teri were gracious enough to spend hours of their lives visiting with me, and I feel much of our conversation was too sacred to share. I found a fragment of the celestial in the Wilson home, a piece of heaven bred through years of sacrifice and loss that produced a love so tangible and soul-stretching, you felt your own spirit deepening for having witnessed it.

After Melissa's birth, the Wilson family fundamentally changed. Melissa became their axis, the star around which the family orbited. While some children might feel resentful about such a situation, the Wilson children embraced Melissa, skipping movie nights so they could stay home with "Missy," placing her by the piano in Primary so she could feel the instrument's vibrations, or bringing their friends over so Melissa could be part of the games and play.

And Keith and Teri gave their hearts, bodies, and souls to caring for Melissa. Few can understand the constant and physical demands of caring for a child who is unable to sit up, walk, or eat on her own, but Keith and Teri became Melissa's legs and hands willingly and tenderly, calling Melissa their angel on earth.

When Melissa was young, the Wilsons discovered that she was also deaf, a fact that could have left Melissa in an isolated, detached world. But the Wilsons found ways to breach that communication gap, quickly learning Melissa's "language" of emotions, eye movements, and facial expressions and interacting with Melissa in ways that would earn one of her luminous smiles.

Along with the fun and adventures the Wilson's shared, Keith and Teri noted that there were many sacred moments they experienced with Melissa. At times, Melissa's attention would become riveted on a corner in the room, her face would light up, and she would give rapt attention to something none of the other family members could see. "We knew she was seeing and talking with angels," the Wilsons say of these moments.

In October 1995, at 19 years old, Melissa passed away, joining those angels she so often witnessed and conversed with.

"Melissa was the focus of the entire family's life for all the time she was there, so it was a very, very tender relationship," Dennis explains. "Melissa was the driving spiritual force of the [Wilson's] bond."

And, at the deepest level, that is what In the Family Circle represents, Dennis explains. "I really liked that symbolism of the recommitment to the relationship of marriage, to the relationship of parenthood and the obligation and responsibility that goes into bringing up a child. And of course, for Melissa and her family, it was not only that but the inclusion of their other children, that, 'Okay, partners, we’re in this together.'"

But the true power of In the Family Circle is the way it offers hope in the face of difficult circumstances, even tragedy. Dennis says, "I realize it’s really easy for us to get sweet about things [in the Church], for everything to be peaches and cream. [But] life isn’t peaches and cream, and so often with death, and when we lose someone, we really are brought closer as a family. . . . It’s easy for us to say we live after here, but suddenly the emotion of the relationship of the family is reconfirmed and resolidified."

Melissa's story and the statue it inspired did that for my own family. And her story continues to inspire others the world over.

In a 1989 general conference address, President Thomas S. Monson shared how he presented a statuette entitled First Step, a variation of In the Family Circle, to Chairman Erich Honecker while he was on assignment to open East Germany for missionary work. About the gift, President Monson said Chairman Honecker "was highly pleased." Dennis noted that this statue has been given to diplomats the world over. In fact, one diplomat had recently lost a granddaughter when he received the statuette, making the exchange emotional and tender.

The gift softened Chairman Honecker, and he told President Monson, “We know members of your Church believe in work; you’ve proven that. We know you believe in the family; you’ve demonstrated that. We know you are good citizens in whatever country you claim as home; we have observed that. The floor is yours. Make your desires known.” That same day, Chairman Honecker gave President Monson permission to send missionaries into East Germany. 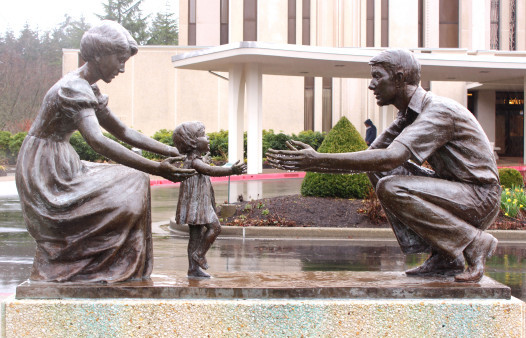 Image of the statue outside the Seattle Washington Temple from thetempletravelers.com.

Variations of In the Family Circle have been placed on temple grounds in Seattle, Washingon; Madrid, Spain; and in Provo, Utah, representations that keep Melissa's memory and story alive. "We want Melissa to be remembered," Keith and Teri say. "We want people to know how much value and meaning her life held." 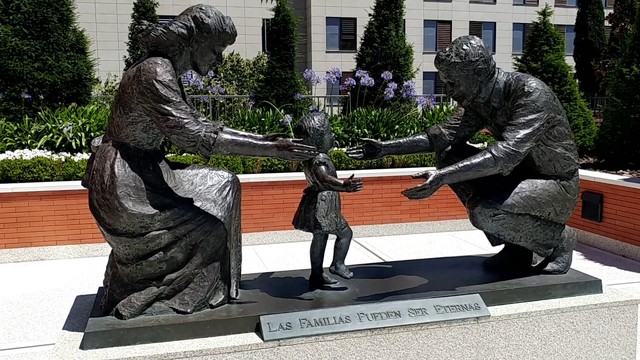 Image of the statue outside the Madrid Spain Temple retrieved from YouTube.

From politicians to a little girl who lost a sister she never knew, Melissa's story has touched thousands and created a thread that has woven together dozens of stories of love and loss. And, when you get to the heart of it, that is because we are all a part of the family circle. We are all a part of an eternal family. We are all embraced and encircled in the arms of a loving Heavenly Mother and Heavenly Father, and we are all taking our first, uncertain steps as we face challenges, love, loss, and hope that connects and binds us in unimaginable ways. 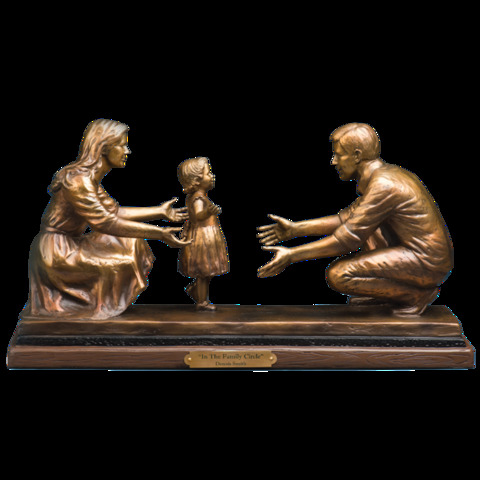 Get a copy of In the Family Circle to own for your home.

Taking your first steps is a milestone in every person's life. Each must pass through this ritual. We celebrate that moment with this timeless sculpture, a reminder of a father's arms outstretched and reassurance that each step and misstep thereafter will have the family circle of support for eternity. Find it in beautiful porcelain or bronze.