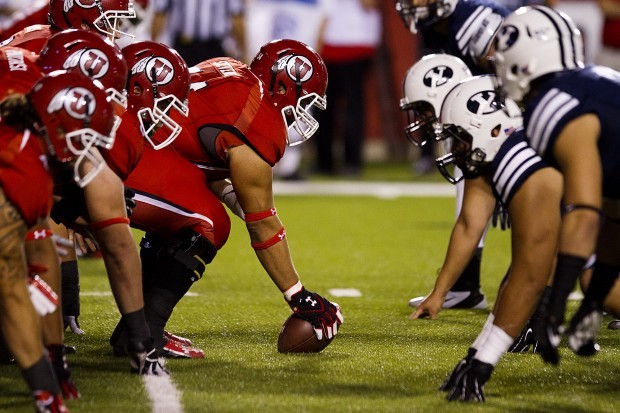 For Mendenhall's last game with BYU, he will get to play the school's biggest rivals: the University of Utah. Mendenhall said in a news release that this gives the game "some historic significance, as well [as] being a great matchup between two teams that have had outstanding seasons."

Utah's reward for its best Pac-12 season is a repeat appearance in the Las Vegas Bowl and a second heated rivalry game in the next nine months.

The news that the Sun Bowl had selected Washington State and left Utah as the default pairing with BYU in Las Vegas was met with dismay by Ute fans on social media Sunday afternoon. But at risk of being said to have orchestrated it, Utah's Dec. 19 matchup presents story lines aplenty.

The 9-3 opponents will vie for in-state bragging rights for the 96th time. In Bronco Mendenhall's final game as BYU's head coach, he'll have an opportunity to snap a four-game skid against the man BYU first offered his job, Kyle Whittingham, and to earn his 100th win. Three U. coaches played for the Y. And there are the usual family conflicts: Utah junior kicker Andy Phillips is the brother of BYU women's soccer midfielder Bizzy, BYU offensive coordinator Robert Anae is the uncle of Utah women's volleyball standout Adora, Utah freshman wideout Britain Covey is the brother of former BYU wideout Stephen, etc.

Lead image from The Daily Herald.