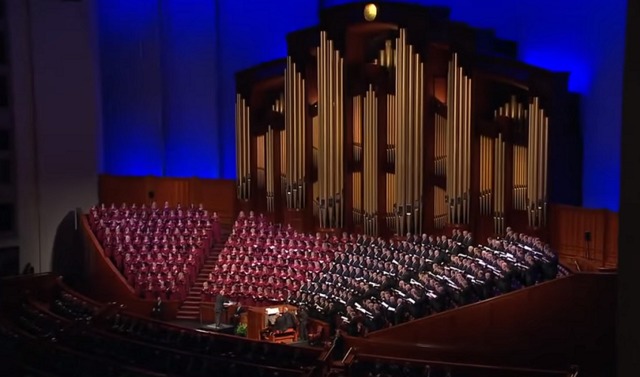 The Unexpected Story Behind One of the Most Popular LDS Hymns

Easily one of the most-sung hymns at general conference, “We Thank Thee, O God, for a Prophet” is a familiar song for most Latter-day Saints. However, members seem to be less familiar with the story behind this popular hymn.

While this song expresses gratitude for a modern-day prophet and faith in the Restoration of the gospel, the hymn’s tune was actually written by a nonmember, Caroline Sheridan Norton.

Granddaughter of the famous English playwright and actor, Richard Brinsley Sheridan (who authored plays like The Rivals, School for Scandal), Norton also made a name for herself as a writer and advocate for women’s rights, after facing injustice in court and losing custody of her children.

After a high-ranking English officer in the Crimean War died in 1854, Norton wrote the song, “The Officer’s Funeral March,” which was sung at his funeral service. The music, which later became the tune for “We Thank Thee, O God, for a Prophet,” accompanied more somber words than the restoration hymn of gratitude that we know today:

Hark to the shrill trumpet calling!
It pierces the soft summer air;
Tears from each comrade are falling,
The widow and orphan are there.
The bayonets earthward are turning,
And the drum’s muffled breath rolls around;
Yet he heeds not the voice of their mourning,
Nor wakes to the bugle sound.

After some five to ten years passed, a Mormon elder by the name of William Fowler penned a hymn of praise, which only needed a rousing tune. Ironically enough, Fowler found Norton’s funeral march and adapted it for his hymn, creating the hymn we know and love today, “We Thank Thee, O God, for a Prophet.”

► You'll also like: 10 Things You Didn't Know about Your Favorite LDS Hymns

Before Fowler even turned 15 years old, his Protestant father and Roman Catholic mother had passed away, leaving him an orphan. Before their deaths, they had both joined the Wesleyan Methodists, which made Fowler consider what religion meant to him.

After he became dissatisfied with the Methodist church, Fowler attended a Mormon service by invitation from his LDS friend. After years of searching for truth, light, and the reality of the gospel, Fowler found the restored gospel and was baptized on July 29, 1849, at the age of 19.

Fowler's faith and testimony saw him through four years as a missionary. His dedication and perseverance through the long days of missionary work and persecution paved the way for his grateful hymn. Sometime between 1860 and 1863, Fowler wrote his hymn and delivered it to President Joseph F. Smith when he was in England, and it was published in the 1863 hymnbook.

Fowler's hymn testifies of his faith and belief in the Restoration of the gospel of Jesus Christ. His hymn expresses gratitude for a living prophet, as well as faith in the Lord and His restored gospel:

When dark clouds of trouble hang o'er us
And threaten our peace to destroy,
There is hope smiling brightly before us,
And we know that deliv'rance is nigh.
We doubt not the Lord nor his goodness.
We've proved him in days that are past.
The wicked who fight against Zion
Will surely be smitten at last.

We'll sing of his goodness and mercy.
We'll praise him by day and by night,
Rejoice in his glorious gospel,
And bask in its life-giving light.
Thus on to eternal perfection
The honest and faithful will go,
While they who reject this glad message
Shall never such happiness know. (Hymns, #19)

Watch the Mormon Tabernacle Choir's moving rendition of "We Thank Thee, O God, for a Prophet" on YouTube.

Adapted from Stories of Our Mormon Hymns, by J. Spencer Cornwall (1961).

Read the stories behind your favorite hymns in Our Latter-day Hymns: The Stories and the Messages, available at Deseret Book.