The Joseph Smith Papers recently published its 17th volume associated with the life and works of Joseph Smith. The project, which began with the work of a single individual, has grown in scope and influence over its first decade. Along the way, the project has changed in numerous ways, overcome challenges, garnered unprecedented popularity, secured academic prestige, and set the stage for a new era of Mormon history.

When the first volume was published in 2008, it flew off the shelves.

“Its success can be attributed in part to our dual audience,” said Sharalyn Howcroft, an archivist and document specialist who has been with the Joseph Smith Papers project since its inception. “Mormon scholars and historians were interested, but the general church membership has a vested interest in Joseph Smith as well.”

Not surprisingly, the origins of the Joseph Smith Papers lie with a scholar who appeals to both academics and laymen.

“Dean Jessee published The Papers of Joseph Smith beginning in 1989,” said Howcroft. “It was a one-person operation projected to be a multi-volume series.”

Jessee’s original focus began with documents authored by Joseph Smith and gradually expanded. “In the beginning, I had defined the Joseph Smith Papers too narrowly. I thought the project could be completed in about 10 volumes,” Jessee told Robin Scott Jensen, Project Archivist and Associate Managing Historian.

“The earlier definition of what constituted the Joseph Smith Papers was incomplete,” he said. “I had failed to include essential records created under [Joseph’s] immediate direction.”

By expanding the scope of what would be included in the project, the projected volumes have more than doubled. The project anticipates approximately 24 volumes will be published by 2022.

“What started as a one-person operation has grown to approximately 50 staff members, researchers, volunteers, and missionaries,” added Howcroft. 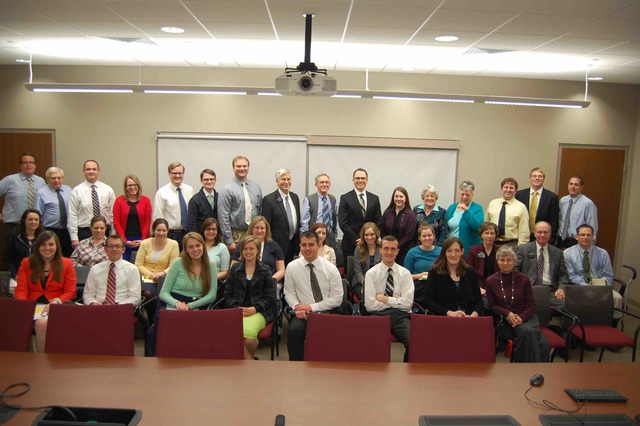 In June 2001, Howcroft found herself in a meeting at the Abraham Smoot building at Brigham Young University. She listened as then-Elders Bruce C. Hafen, Neal A. Maxwell, and Henry B. Eyring gave their stamp of approval and spoke of what the project would become.

“As I was taking in the magnitude of this experience, I realized I was one of the only two women there and the youngest person in the room,” she recalled. “Witnessing the conversation was mind blowing.”

Howcroft and others eagerly set to work, but soon found they were running faster than they had strength.

“We anticipated publishing four volumes a year and concluding the project in 2005—the year of the Joseph Smith bicentennial,” said Howcroft. “This production schedule was overly ambitious, as we were unaware of how labor-intensive documentary editing projects can be.”

New documentary editing projects do not begin every day, but the general idea has been around long enough that similar challenges can be predicted.

“I think the greatest challenges that documentary editions face in getting off the ground is figuring out how to scale their projects,” said Sara Martin, Editor in Chief of the Adams Papers—a documentary editing project associated with the family of John Adams that has published volumes since the early 1950s. “There is often a gap between what you do and what is achievable with the resources at hand.”

The hiring of Mark Ashurst-McGee, Senior Review Editor, in 2002 signaled a change in how the project would proceed.

“His arrival was formative in making The Joseph Smith Papers a documentary editing project. Mark advocated implementing standard documentary editing practices and principles,” said Howcroft. “This not only required well-established historians to learn a new discipline, but also required a systematic overhaul of the content previously published.”

For the next three years, staff underwent intense training. By 2005, the project was growing in size and quality.

“Due to overwhelming support from the administration at the Church History Department, the project moved to Church Archives in 2005. Being closer to the sources was essential to our work and increased our ability to create a superior product,” said Howcroft. “It disrupted our productivity for a time but was key to the vitality of the project."

The project engaged in a successful marketing endeavor in 2007-08 that created the longest-lasting misconception associated with the project.

In an effort to promote the project, TheJoseph Smith Papers partnered with Glenn Rawson and Dennis Lyman to create a television series about the project. The series was met with great popularity but also caused a degree of confusion that has lingered through the years.

“The purpose was to create public awareness of the project and promote the volumes,” said Howcroft. “Unfortunately, many people had the impression that the TV show was the project rather than an outreach effort for the project.”

Despite the confusion, the project went to press and published Journals: Volume 1 in 2008 and Revelations and Translations: Manuscript Revelation Books in 2009.

Another multimedia effort of the project has been met with far greater clarity.

As Martin received a grant to establish a digital publishing cooperative at the Massachusetts Historical Society, she looked to the Joseph Smith Papers for an example. 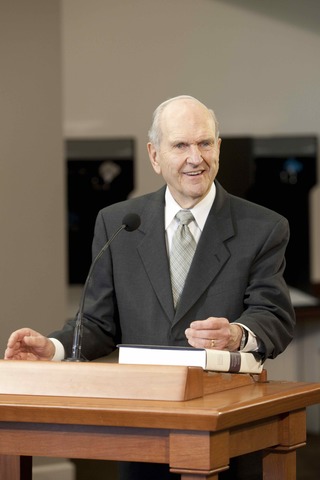 “TheJoseph Smith Papers was among the projects we considered as models for how we might present information to the public,” said Martin. “The integration of social media helps us engage more diverse audiences. This is something The Joseph Smith Papers team does exceptionally well.”

As The Joseph Smith Papers continued to accent volume publications with multimedia content, a new scholar with new ideas joined the project.

Matt Godfrey was hired in 2010 and currently serves as a general editor and managing historian.

“I was hired by the project at a time when it was going through a transitional phase,” said Godfrey. “Instead of relying on academics at BYU to edit Joseph Smith’s papers, the project was hiring PhDs who would work for the Church History Department and produce the content internally.”

Godfrey was struck by the academic caliber of those working on the project and felt immediately at home.

“[They] were very open and accepting of ideas to improve the project,” said Godfrey. “Not all of these could be implemented, of course, because the project already had certain ways of doing things, but I never felt as though I couldn’t offer suggestions.”

Godfrey would go on to contribute in both academic and administrative ways, but a special experience his first day created a lasting memory.

“In terms of a moment when I thought, ‘I can’t believe I get to do this for my job,’ it came on my very first day,” said Godfrey. “I was walking toward the beautiful Church History Library, saw the temple in the background, and realized I was now a part of the seminal Mormon history project of the twenty-first century.”

Godfrey has witnessed his testimony of Joseph Smith grow in meaningful ways since that first day looking out over the temple.

“I think we often hold Joseph to an impossible standard—that he never made mistakes, that he knew everything about the gospel when he exited the Sacred Grove, that he never felt real human emotions,” said Godfrey. “And, of course, that’s a completely unfair way to look at him because no human being is like that.”

“Working on The Joseph Smith Papers has shown me that Joseph experienced life much the same way we all do,” continued Godfrey. “He experienced sorrow and pain. . . . He was trying to figure out how to lead a church at the same time that he was trying to fulfill his roles as a husband, a father, a son, a brother.”

“Sometimes the Lord let him figure things out on his own, making mistakes along the way,” said Godfrey. “So for me, Joseph has become much more of a human being—someone who is not difficult to relate to as I go through life.”

The beauty of TheJoseph Smith Papers is that experiences like those of Godfrey are not limited to historians employed by the project. Each year, new books are published that draw upon scholarship of The Joseph Smith Papers.

For example, The Council of Fifty: What the Records Reveal about Mormon History was published in 2017 and edited by Matthew J. Grow and Eric Smith, both of whom work for The Joseph Smith Papers. In March 2018, Ashurst-McGee, Jensen, and Howcroft published Foundational Texts of Mormonism: Examining Major Early Sources, a volume that seeks to reinterpret essential texts from Mormon history based upon new research. At least five of the scholars included in the compilation have or will publish full-length books expanding upon their research.

In addition to books, insights from the project will likely be incorporated into lesson materials for church.

The manner in which project discoveries are communicated vary, but one reality remains constant: any serious engagement with Mormon history will go through The Joseph Smith Papers. 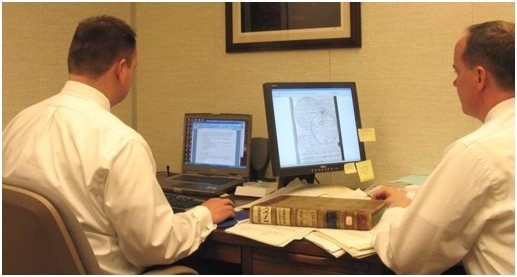 After a successful first decade of publishing, the future is bright for scholarship drawn from The Joseph Smith Papers and increased access to historical research signifies increased opportunities to appreciate Joseph Smith and early Mormon history.

“I reflect on who I was when I began working on the papers project in 2000 and who I am now,” said Howcroft. “I am an acutely changed person. The journey has been long . . . but deeply rewarding. I will never be the same.” 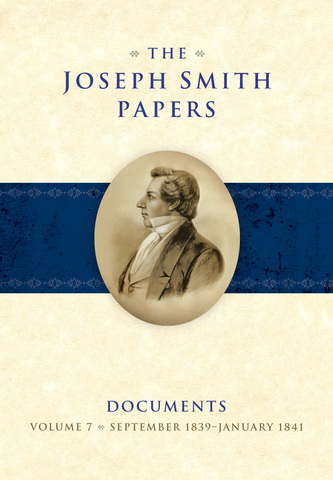 The seventh volume of the Documents series, published in April 2018, contains personal correspondence, discourses, minutes, a revelation, and a memorial to the United States Congress, among other documents. The volume shows Joseph Smith and the church endeavoring to establish another gathering place for the Saints. Specific topics addressed in these documents include the practical and spiritual building up of Nauvoo, Illinois; the struggle to obtain redress for the property and lives lost in Missouri; the missionary efforts of the Quorum of the Twelve Apostles in England; and the introduction of new teachings and doctrines, including baptism for the dead.