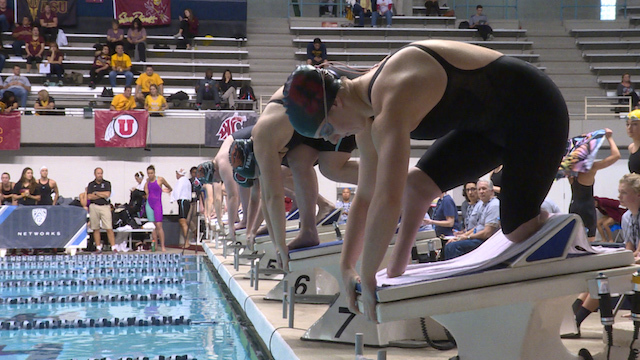 Brickelle Bro's hand slid into the water one last time just before she hit the pressure-sensitive timing device on the pool wall.

As she lifted her head out of the water and turned to see the results of her swim on the scoreboard, her facial expression went from shock to elation in a matter of seconds.

Brickelle Bro had just beat the S8 American Paralympic record in the 1,650-yard freestyle—for a second time—with a time of 19:56.87.

With shaking hands, she lifted her goggles off of her face and raised her hand in the air to a cheering crowd, laughing breathlessly as she did so.

But even after breaking an American Paralympic record twice, Brickelle had her sights on something else—the Rio 2016 Paralympics.

"I think Brickelle grew to like swimming because she felt so free in the water," says Heather Bro, Brickelle's mother. "It was the great equalizer. She was able to move as fast as her friends and peers and get around and play."

Brickelle was born with fibular hemimelia and amniotic band syndrome, which caused the amputations of both her legs below the knee.

And while she tried a variety of sports using prosthetic legs, she excelled at swimming.

At 15, Brickelle was invited to compete at the U.S. swim team trials for the London 2012 Paralympics. While Brickelle and her family were excited at this opportunity, Heather says her family had the car packed and ready to head home because no one, not even Brickelle, was expecting her to make the team.

"Then they called her name," Heather says. "We were so proud, happy, and excited for her."

► You'll also like: Mormons to Watch for During the 2016 Paralympic Games (+Their Inspiring Stories)

But swimming and setting her sights on the upcoming Rio Paralympics wasn't all Brickelle did during this time. Brickelle is the founder of MyFeetDon'tStink, an organization dedicated to educating others about people with disabilities and raising money for scholarships for girls with amputations.

She also was invited as a guest speaker at several events, sharing her experiences and educating others about physical disabilities.

"Brickelle’s biggest challenge isn’t that she doesn’t have her legs or feet," Heather says. "Her challenges are trying to show everyone that she’s just a lovely normal young lady who is trying to be the best she can be. Just like any other young person, she struggled with where to go to college, what to study, the anticipation and disappointments of high school, etc."

When it came time to apply for college, Brickelle was determined to continue to swim on a college team and train for the 2016 Paralympics.

She applied for seven schools, was accepted into six, but only one agreed to let her swim on their team—Stanford.

"Making the Stanford team was an answer to many prayers," Heather says. "She searched long and hard for a school that would be open-minded and where the team would accept her so she could train for Rio. She understood that she wouldn’t necessarily make the team, but wanted a place to train.  After making it into Stanford, she was able to visit with the Stanford coach. He welcomed her to the team, not only to train, but also to be a part of the team and compete. He saw her potential and welcomed her onto the team with open arms."

But Rio isn't the end for Brickelle.

"After the games, she has less than a week until school starts again at Stanford, so she will be home in Colorado for a short, four-day break before heading back out to school and classes," Heather says. "She plans to enjoy her sophomore year, decide on a major, and, after a few weeks out of the pool, get back to work with the Stanford women’s swim team training and competing once again."