Judge A. Sherman Christensen dreamed that one day the American legal system could create a standard for legal excellence akin to the monumental Great Halls of the Inns of Court in England.

U.S. Supreme Court Chief Justice Warren Burger traveled to England in 1977 as part of the Anglo-American Exchange to learn more about the English legal system. Burger was particularly impressed with the collegial approach of the English Inns of Court and with the way in which the Inns passed on to new lawyers the decorum, civility and professional standards necessary for a properly functioning bar. Burger thought that the American legal system could adopt many of the positive values of the English Inns, such as integrity, civility, and collegiality, integral concepts of the English Inns.

After visiting England, the Chief Justice appointed U.S. District Judge A. Sherman Christensen to spearhead a project of creating Inns of Court in America patterned after the English Inns of Court. Christensen, Burger, and Rex E. Lee founded the first American Inn of Court in 1980 in affiliation with the J. Reuben Clark School of Law at Brigham Young University in Provo, Utah. The organization grew rapidly with the creation of the American Inns of Court Foundation in 1985.

Serving Alongside a Tyrant

Christensen pursued a career in the law following the path set by his father. In his early career before becoming a judge, Christensen became a successful and well-respected trial lawyer.

After his nomination by President Dwight D. Eisenhower and confirmation by the Senate in 1954, Christensen became the first federal judge in Utah who was a member The Church of Jesus Christ of Latter-day Saints. When Christensen went to the White House to be interviewed by President Eisenhower, the President entered the room, shook his hand and said, “I want to meet the only judicial candidate thus far in my Presidency who the FBI has given a perfect score in its background check.”

Judge Christensen was “extremely precise and fair and well prepared and sober. Even if he ruled against you, people always thought he was fair,” recalled Christensen’s former law clerk Allan Brinkerhoff.

Judge Christensen displayed fairness and compassion from the bench. When a deaf and blind immigrant, Aslaug Vaieland, appeared before the judge to take the oath to become a United States citizen, the compassionate judge first offered to waive the repeating of the oath. But Vaieland, with tears in her eyes, told the judge she wanted to repeat the oath. Vaieland, who lost her hearing at the age of six through scarlet fever and experienced similar disabilities as Helen Keller with deafness and blindness, repeated the oath in a loud clear voice with the assistance of an interpreter using sign language and touching Vaieland’s hand. Christensen said he purposely kept another case outside his courtroom, concerning a man who faced deportation, so the man would not have to witness the moving ceremony of new citizens taking the citizenship oath.

As a federal judge, Christensen decided many important cases, including those involving constitutional questions.

The venerable and self-styled “country lawyer” presided over many cases during his 36-year career as a federal judge, but the one trial that Christensen enjoyed the most involved the mock trial of none other than General George Washington. In a mock trial held in the oak-paneled panoply and high stained-glass of the Great Hall of Lincoln’s Inn in London, Christensen served as one of three judges deciding the fate of Washington with British barristers trying to prove Washington was a traitor to the crown.

The trial was set in 1779, after the Declaration of Independence, under the imaginary premise that General George Washington had been indicted for treason and returned to London to face and defend the charge before a British court. The late seventeenth-century penalty for treason was severe. A convicted person was drawn (dragged to the gallows), usually with a blanket or sled to avoid abrasion, then hanged and his body quartered, with its parts to be at the disposition of the king. The expression “drawn and quartered” derives from this cruel punishment.

Christensen served as the lone American judge on the three-judge panel. Thomas Jefferson, Benjamin Franklin, and Washington, portrayed by members of the Philadelphia-based Royal Pickwickians, a troupe that combines acting with historical research, testified for the defense in attire appropriate for the eighteenth century. In a blending of two great, complementary systems of justice, the three-judge panel unanimously found that Washington would avoid the gallows. The judges found that the way Britain governed the colonies had forced the Americans to react.

“It was exciting to see the interface of the two systems of justice,” remarked Christensen. “The American lawyers who were perhaps less polished and more direct, dressed in their contemporary American business suits, and the British, calm, articulate and more disciplined in their colonial dress. The trial was a very moving one. I tried to practice judicial impartiality.” Christensen found the advocacy highly effective on both sides, and he was especially stirred by the words of Thomas Jefferson. During the trial, Christensen confessed “predisposition” in view of his “sojourn in the Colonies” and his “distant acquaintance with some of the witnesses,” but vowed with the other judges “to decide the case without fear or favor.” Christensen concluded that “it was British law that oppressed the Americans as much as British actions did. To give the Colonies the right only to the laws that were oppressing them would be like sending lettuce home with a rabbit.” Christensen described the mock trial, which later aired on television in Great Britain and the United States, as the “experience of a lifetime.”

Receiving Recognition for a Lifetime of Service

On the freedom of religion, Christensen wrote in an opinion, “The right to worship according to the dictates of one’s own conscience and reason and to be free from molestation or restraint in his person, liberty, or estate in such worship, is a natural, fundamental and inalienable right, available to every individual, subject only to a proper exercise of the police power when action is coupled with belief. Freedom to believe or not to believe is absolute. Freedom to act, however, is not absolute but limited or qualified by the power of the state within reasonable limits to protect society pursuant to a compelling state interest.”

Lead images from Wikimedia Commons of Judge A. Sherman Christensen and the U.S. Courthouse for the District of Utah. 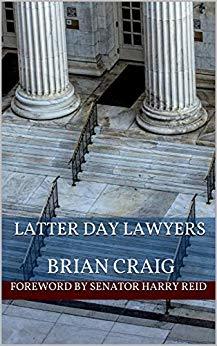 Read more fascinating stories about legal history in Brian Craig’s collection of short biographies of lawyers and judges who are members of The Church of Jesus Christ of Latter-day Saints in his new book, Latter Day Lawyers (with foreword by Senator Harry Reid). Find it at Amazon.