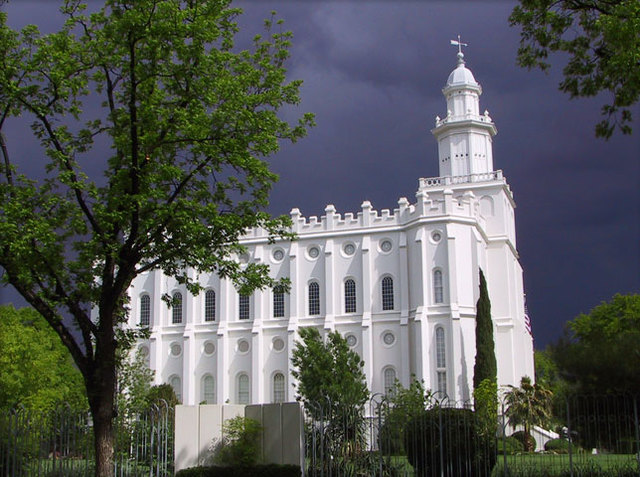 However, even after its dedication, it appeared the temple was not quite finished.

With construction on the Salt Lake City Temple taking decades combined with the restlessness of the Saints in Southern Utah as they faced harsh weather conditions, famine, and troubling times, the announcement of a temple in St. George, Utah, was met with much excitement.

President Erastus Snow, who was present at the meeting where President Brigham Young proposed the temple on January 31, 1871, exclaimed "Glory!" "Hallelujah!" at the thought of having another temple, according to wchsutah.org.

For the next six years, work progressed on the temple, thanks to the enthusiasm of the Saints as they threw themselves into the arduous work of pounding lava rock for part of the foundation, constructing a lumber mill, transporting red sandstone for the temple walls, and many other tasks.

The Saints were simply ecstatic about their new temple and could not wait for it to be completed. Before the entire temple was dedicated in April 1877, there had already been baptisms in the temple, according to wchsutah.org, as the baptismal font and lower floor of the temple had been dedicated in January 1877 by Wilford Woodruff.

However, as the temple neared its dedication date, President Young was not satisfied with the way the steeple of the temple looked, as he mentioned to his son Brigham Young, Jr.

"The tower is wooden and very unsatisfactory piece of work," Young, Jr. wrote in his journal. "Father remarked he would keep the tower locked, that he was ashamed of the framing and the design. It was is some 12–18 feet too low to look well. Prest [Brigham Young, Sr.] says they will have that remided [remedied] some these days," (Brigham Young Jr., Journal, May 10, 1876, 83).

However, the temple was left as it was and dedicated on time. This was fortunate because had the construction on the temple continued, President Young likely would not have seen the completed temple before he passed away a few months later.

Happy to finally have a temple in the West, the Saints enjoyed using the St. George temple as it was until October 1878 when a severe thunderstorm rumbled through St. George. During the storm, lightning struck the tower, completely destroying tower but miraculously damaging no other part of the temple.

For years the tower underwent repairs until the Saints decided to heighten the steeple, consequentially giving the temple the look Brigham Young preferred.