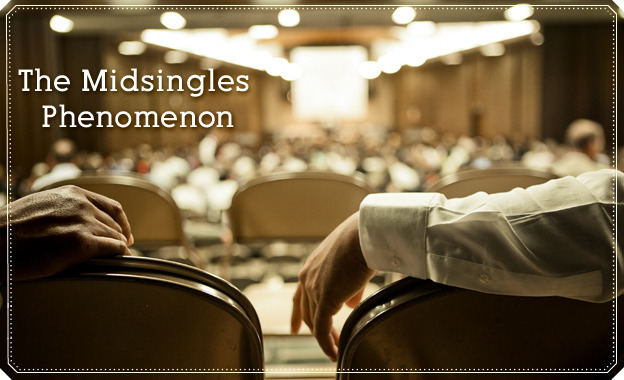 The Midsingles Phenomenon in the LDS Church

This article is an excerpt from our magazine. To get the full story, subscribe to our magazine or purchase a single copy through Deseret Book.

“The thing about the midsingles program,” says Bishop Steve Lang, “is that these people, our friends, our brothers and sisters, they go to church, they go on missions, they keep themselves worthy, unbelievably so. They do everything they are supposed to do, and they are in this crazy world with all this temptation around them. But once they hit 31, if they haven’t been able to find their mate, then [they’re asked to leave] their [singles] ward.”


And, he says, leaving their ward can often be a very painful process for singles, many of whom feel ostracized.

Adam Loughran is the bishop of the Huntington Beach 1st Ward, a magnet ward (a family ward for midsingles), and he says that from a cultural standpoint, the strong focus on families can make it difficult and uncomfortable for many midsingles who haven‘t been able to reach that goal, often driving them away.

The State of the Single Life
Matt Campbell is the regional representative for the Orange County singles/midsingles committee, which comprises 16 stakes in Orange County. Many single members, upon turning 31 and having to leave their young single adult ward, go inactive by the time they are 34, he says. “In each stake [in Orange County] there are on average 250–600 thirty-something midsingles, yet only a handful are active, often sitting alone in a family ward.”

Because midsingles make up those ages 31 to 45 who have never been married, in addition to those who are divorced and widowed, as much as Church leaders are anxious to help, there isn’t really a clear-cut answer. Typically, midsingles have three options following graduation from a YSA ward: a family ward, midsingles ward, or the latest buzz word, the magnet ward.

The Family Ward
For Farrah Walker of Los Angeles, she landed in a family ward because it happened to meet across the street from her place of employment. Unfortunately, she felt so uncomfortable, she didn’t want to return. “People would ask me why I was there. ‘Don’t you know there’s a singles ward?’ they would say. After a few weeks of this, I just couldn’t bring myself to go in anymore. I would drive to church and then just sit in the parking lot.”

But Walker didn’t give up, and the next time around things went better. “I love my family ward now,” she says. The difference? “People connect with me based on common interests and ideas, they treat me  like anyone else, rather than focusing on my marital status. It’s ‘I loved your comment in Relief Society,’ not, ‘Hey, why aren’t you in the singles ward?’’

The Midsingles Ward
Option number two for a graduating single is a midsingles ward, the same thing as a regular singles ward but for those aged 31–45. For Rod Rex of Salt Lake City, this was the logical choice when he turned 31. But after going to the three-hour block, he vowed never to return. “I was the baby. I had just turned 31 and I was surrounded by so many people who had been married before and were much older than I was. I just didn’t feel comfortable.”

For others, it’s not the age that’s the problem, but their children: they’re not allowed. For those who do have children, it’s difficult to make arrangements to attend one ward themselves while their children attend a regular family ward.

The Magnet Ward
A magnet ward is a family ward that all the midsingles in the stake congregate to, so they not only have the opportunity to be with other midsingles, but they are also integrated into the ward by having family ward callings, which helps keep a family perspective in a non-threatening way. The only difference in their Sunday schedule is a Sunday school class twice a month just for midsingles, so they can connect. Other than that, they are treated just like everyone else, and that’s the way they like it.

“There’s that sense of belonging and being needed and wanted,” says Loughran. “Every week I hear the same thing: ‘Bishop, if it wasn’t for this ward, I don’t know if I’d be an active member.’”

Now, eight years later, there are 18 magnet wards in the country and counting.

Because of their growing popularity, Campbell put together a website, midsingles.wordpress.com, to explain how to create a magnet ward, discuss frequently asked questions, and list current Facebook groups and midsingles activities.

Connecting Beyond the Ward
In places where a magnet or midsingles ward may not be possible—or for those who want a little extra help—hope is not lost for midsingles who are looking for other ways to connect. With the onslaught of social media, midsingles have more ways to come together than ever before.

Currently, there are over 150 different Facebook groups dedicated to connecting midsingles in all regions of the country and world, such as Get Out! LDS Singles, which has over 2,200 members. Nearly every state in the United States has a midsingles Facebook page.

There are also conferences that allow midsingles from around the country to flock together in a more literal way. One of the most famous is the Huntington Beach Midsingles Conference.

The 2012 line-up of events for the weekend included beach volleyball, surfing, dancing, bowling, hot air balloon rides, and motivational speakers flown in to edify and uplift the crowd. It’s no wonder this six-year ritual is continuing strong and being replicated all over the country.

“I love all midsingles activities, but there’s something about the church-sponsored conferences that I really appreciate,” says Jeni Baird, the conference committee chair. “Everybody walks away with something. Whether it’s meeting someone new or a toolbox of tips and tricks to be a more attractive person or strengthening their testimony, everybody leaves feeling enhanced.”

And what did Larry Cluff of Salt Lake City plan to walk away with? “Phone numbers,” he laughs. “Lots of phone numbers.”

Finding Their Place Now
Despite the fact that the midsingle population of the Church is often regarded as high risk, those members have also been referred to as the strength of their wards. “The truth is, the leadership in our magnet ward was 85 to 90 percent midsingles,” Lang says. “Those were our best choices. They were the most experienced, mature, established, and respected. The Huntington Beach 1st Ward became the strongest ward in the stake because of the midsingles. They are huge asset to any ward they are in.”

“Midsingles just want to be viewed as contributing members,” Rex concludes. “Marriage is in the Lord’s time. Whatever age you are, stay positive and focus on what you need to do. Single or married, everyone has different challenges. We just need to put our focus forward.”

This article is an excerpt from our magazine. To get the full story, subscribe to our magazine or purchase a single copy through Deseret Book.

Still want more? Check out our articles on making the transition from the singles ward to the home ward and advice to ward leaders of single saints.