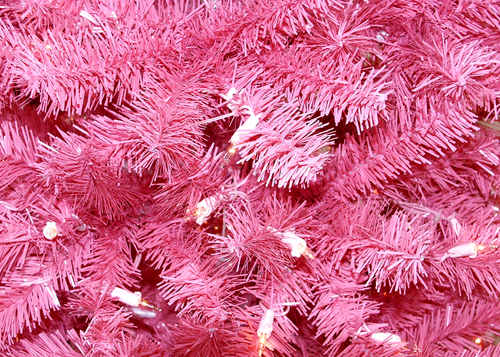 The Miracle of Elsie and the Pink Christmas Tree

Sunny Mahe has a pink Christmas tree in her home.

While some might think it’s an unusual color to celebrate the holidays, for Mahe it represents miracles, love for one another, and the Savior.

Three years ago, on November 22, 2016, Mahe’s 3-year-old daughter, Elsie, became entangled in a window blind cord in their home.

When Mahe discovered her daughter, a number of miracles took place shortly afterwards. A neighbor who was running late for work happened to be close by and had consecrated oil in his pocket, so he was able to administer a blessing to Elsie. And while paramedics were typically stationed 15 minutes away, they were on a break at the time and were only 3 minutes from her home. Additionally, Mahe had never administered CPR before, but she was able to start Elsie’s heart in that moment.

Mahe hoped these miracles meant her daughter would experience a full recovery, but when scans returned showing little and declining brain activity, she wondered what those miracles had been for. But then she came to the realization that Elsie herself was the miracle.

“The lifesaving miracle we had pleaded for would not be for Elsie but instead from Elsie to others through the miracle of organ donation,” she wrote in a post on ChurchofJesusChrist.org. “She would give to those whose missions here were not yet finished, and she would leave this earth as a lifesaving hero. Our pain would become another’s joy.”

Mahe shared more miracles that took place during that week at the hospital. Neighbors came to her home, cleaned, brought in new furniture, and painted walls. Things that were broken were repaired and tuned up.

“When we drove home from the hospital for the final time, we found the streets of our neighborhood lined with hundreds of candles lighting our path,” she wrote. “It was bitterly cold, yet dozens of neighbors stood outside to sing comforting hymns to us. Many trees were strung with pink lights or tied with pink ribbons—Elsie’s favorite color.”

Knowing that Christ was born, Mahe continued, gives her family comfort, knowing that they will be able to see Elsie again. Now, as she drives around the streets at Christmastime and observes trees in her neighborhood adorned with pink lights, it reminds her of her daughter, the love of her neighbors, and her Savior who made eternal life possible.

“Because those pink trees remind me of Him, they have become the classiest decoration I could possibly have in my home,” she said. “If you happen to see a pink tree this year, I hope it will remind you of the Savior and maybe of a way that you, too, can light the world this Christmas.”

READ THE REST OF THE STORY AT ChurchofJesusChrist.org