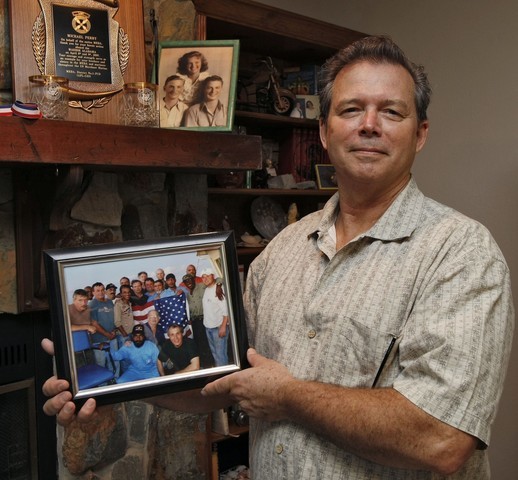 When pirates hijacked the merchant ship Maersk Alabama off the coast of Somalia in 2009, Latter-day Saint and Chief Engineer Mike Perry emerged as the true hero during the attack, according to The Guardian.

A 45-year veteran on the seas, Perry served in the Navy before becoming a Merchant Marine in 1995. When four Somali pirates boarded the Maersk Alabama and took Captain Richard Phillips and other crewmembers hostage, Perry risked his life subduing the chief pirate Abduwali Abdukhadir Muse, who was searching the ship for missing crew members. Perry fought and disarmed Muse in the dark engine room using nothing but a pocket knife, turning the tables by taking Muse hostage.

After upsetting the balance of power and gaining the upper hand, Perry used Muse as a bargaining chip for the return of Phillips. But, when Phillips went to start the lifeboat so Muse and his men could leave the merchant ship, the pirates went back on the deal, taking Phillips hostage once again.

The release of Captain Phillips generated some controversy in the way it portrayed Captain Phillips as a self-sacrificing hero that perpetuated legends and myths spread by the media. But, as Perry told The Tampa Tribune, “the captain was captured from the beginning” and did not offer himself up for his crew.

In fact, tension regarding what happened aboard the Maersk Alabama grew to a point where many crew members in 2009 filed a lawsuit against their employers Maersk Line and the Waterman Steamship Corp, "claiming both companies failed to provide enough safety measures knowing that the ship was headed into pirate-infested water," according to The Tampa Tribune. The lawsuit also claims that "the captain's willful disregard for his crew's safety contributed to the attack," according to The Guardian.

But Perry was not a part of that lawsuit.

And while many crew members have spoken out harshly against Phillips and Maersk Line, Perry told The Tampa Tribune, “This crew battled for 33 hours with the pirates. No one wanted to give up until everyone was together again. It took everyone, not just one person. Not me. Not the captain, but everyone. Everybody is the hero in this story."

While Perry's heroics do make an appearance in the film, it is only briefly, and his character plays a minor role in the film. About this minimizing of his and other crew members' roles in real events, Perry says, "they had to compress six days worth of events into two hours. . . . The focal point of the movie was Capt. Phillips being rescued."

About his subduing of Muse and other efforts on the ship, Perry told the press, “I didn't pattern myself after Chuck Norris or Jackie Chan. The only thing that got me ready for this was the gospel of Jesus Christ.”