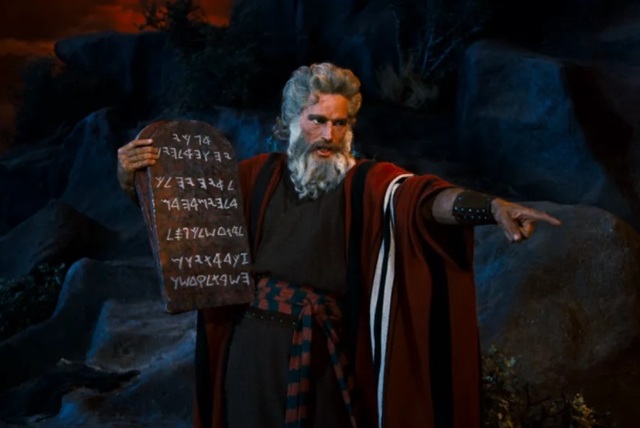 Every Easter season, I anxiously anticipate when the classic, Academy Award-winning, biblically epic movie The Ten Commandments begins to play on TV stations around the world.

Nominated for seven Academy Awards, The Ten Commandments was the most expensive film ever made at the time of its release. The number of people involved in creating the movie is mind-boggling, and the set for the film was so elaborate, large, and expensive to move that producer, director, and narrator Cecil B. DeMille ordered it buried so a rival filmmaker could not use the set.

Truly, The Ten Commandments is a movie that is unrivaled in its grandeur and impact. But did you know there are several Mormon connections to this iconic film?

Cecil B. DeMille hired LDS artist Arnold Friberg to work on The Ten Commandments after Swedish publisher Herman Stolpe showed him Friberg's paintings. DeMille was so impressed with The Finger of the Lord (Friberg's depiction of the Brother of Jared in amazement of the finger of God) that it became the inspiration for Moses’s costume in the burning bush scene. Friberg received an Academy Award nomination (Best Costume Design, Color) for his work on the film.

The Voice of God

Jesse Delos Jewkes, a Latter-day Saint known for his amazing bass voice, was chosen to perform the uncredited voice of God in the film. Jewkes sang in the Mormon Tabernacle Choir in the 1920s and was a soloist with the choir. He performed in radio, operas, vaudeville, and other theater productions, eventually making his way to Hollywood just as the film industry was beginning to incorporate sound into movies. He appeared in several short films and steadily built a career that landed him in major films alongside legends like Bing Crosby, Betty Grable, and Red Skelton.

A Friendship with a Prophet

The Ten Commandments premiered in Salt Lake City, a decision largely influenced by DeMille's close friendship with President David O. McKay, whom DeMille says nearly convinced him to become a Mormon. Despite objections from Paramount, DeMille insisted on previewing the movie in Utah. 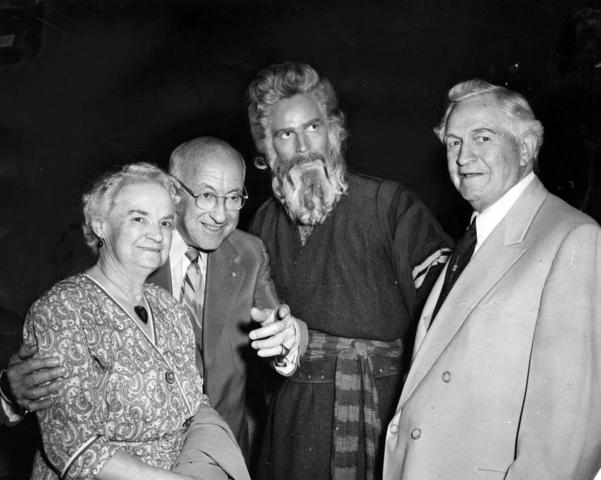 "If the deeply religious, serious-minded Latter-day Saints of Salt Lake City approved of The Ten Commandments, so would millions of others, of other faiths, throughout the world," DeMille wrote, according to the Deseret News. "They did approve it, enthusiastically."

He continues, "It gave me a chance to spend some time with the great-hearted, lovable man who is literally a Latter-day Saint . . . David O. McKay. There are men whose very presence warms the heart. President McKay is one of them."

While speaking at a 1956 BYU commencement, DeMille said he shared with President McKay "one of the most valued friendships that I have, the friendship of a man who combines wisdom and warmth of heart, in whom fourscore years have not dampened the enthusiasm of youth, a man who can truly and literally be called a Latter-day Saint, the president of your church, David O. McKay. . . . David O. McKay embodies, more than anyone that I have ever known, the virtues and the drawing power of your church. . . . David O. McKay, almost thou persuadest me to be a Mormon!”