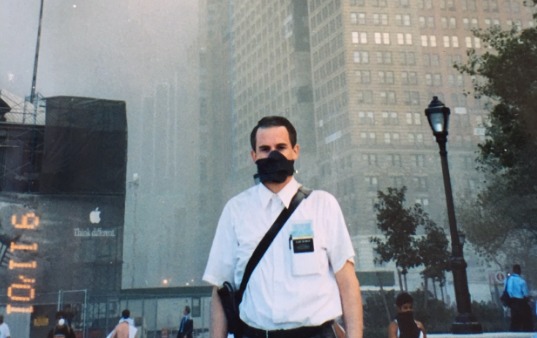 The following is a first-hand account written by a missionary serving near the World Trade Center towers on September 11, 2001.

It’s hard to believe it has been 15 years since 9/11. The experience Elder Fillmore and I had taught me lessons that have blessed me ever since. Our day started like any other at the time, getting ready and leaving early to go do service at Ellis Island. On the subway trip to the south of Manhattan we were alerted to “police action” at the World Trade Center and that we would be skipping that stop. Which was answered by loud groans from those who were inconvenienced by the change in plans (little did they know).

We arrived at the south of Manhattan to find both World Trade Center towers engulfed in flames. Obviously the result of a terrorist attack. We soon found out the weapon of choice were airliners used to crash into the towers. The plans for our day changed as we learned that all subway trains and busses stopped running, leaving us stranded. We met a member of the church who offered to take us to his apartment that was close by until we figured out our next step.

We naively followed him closer and closer to the towers, the smoke pouring from each building, growing larger and larger. At the apartment building we were prevented from going past the lobby due to the danger, being only three blocks away. As we waited an enormous rumbling shook the ground like a lightning fast earthquake.

Read the rest of this story at ldsmissionaries.com

Mormon Life 9/11 Terrorism Missionaries9/11,Terrorism,Missionaries,Mormon Life
Comments and feedback can be sent to feedback@ldsliving.com