The following is an excerpt from the Church's new groundbreaking history, Saints: The Standard of Truth. Read it for free through the Gospel Library app and at saints.lds.org or buy a hard copy to own at Deseret Book. Get more insights into Church history with the Saints podcast.

The day after he received the plates, Joseph went to work repairing a well in a nearby town to raise money for a lockbox. That same morning, while on an errand just over the hill from the Smith home, Joseph Sr. overheard a group of men plotting to steal the gold plates. “We will have the plates,” one of them said, “in spite of Joe Smith or all the devils in hell.”

Alarmed, Joseph Sr. returned home and told Emma. She said she did not know where the plates were, but she was sure Joseph had protected them.

“Yes,” Joseph Sr. replied, “but remember that for a small thing Esau lost his blessing and birthright. It may be so with Joseph.”28

To be sure the plates were secure, Emma mounted a horse and rode for more than an hour to the farm where Joseph was working. She found him by the well, caked in dirt and sweat from the day’s work. Hearing of the danger, Joseph looked into the Urim and Thummim and saw that the plates were safe.

Back home, Joseph Sr. paced back and forth outside the house, glancing every minute down the road until he saw Joseph and Emma.

“Father,” Joseph said as they rode up, “all is perfectly safe﻿—there is no cause of alarm.”29

But it was time to act.

Hurrying to the hill, Joseph found the log where the plates were hidden and carefully wrapped them in a shirt.30 He then ducked into the woods and headed for home, his eyes alert to danger. The forest concealed him from people on the main road, but it gave thieves plenty of places to hide.

Straining under the weight of the record, Joseph tramped through the woods as fast as he could. A fallen tree blocked the path ahead of him, and as he bounded over it, he felt something hard strike him from behind. Turning around, he saw a man coming at him, wielding a gun like a club.

Clutching the plates tightly with one arm, Joseph knocked the man to the ground and scrambled deeper into the thicket. He ran for about half a mile when  another man sprang from behind a tree and struck him with the butt of his gun. Joseph fought the man off and darted away, desperate to be out of the woods. But before he could get very far a third man attacked, landing a heavy blow that sent him reeling. Gathering his strength, Joseph hit the man hard and ran for home.31

Back at the house, Joseph burst through the door with his heavy bundle tucked beneath one arm. “Father,” he cried, “I have got the plates.”

His fourteen-year-old sister, Katharine, helped him set the bundle on a table as the rest of the family gathered around him. Joseph could tell his father and younger brother William wanted to unwrap the plates, but he stopped them.

“Can we not see them?” Joseph Sr. asked.

“No,” Joseph said. “I was disobedient the first time, but I intend to be faithful this time.”

He told them they could feel the plates through the cloth, and his brother William picked up the bundle. It was heavier than stone, and William could tell that it had leaves that moved like the pages of a book.32 Joseph also sent his youngest brother, Don Carlos, to get a lockbox from Hyrum, who lived down the road with his wife, Jerusha, and their newborn daughter.

Hyrum arrived soon after, and once the plates were securely in the box, Joseph collapsed onto a nearby bed and started telling his family about the men in the woods.

As he spoke, he realized his hand ached. Sometime during the attacks he had dislocated a thumb.

“I must stop talking, Father,” he said suddenly, “and get you to put my thumb back in place.”33 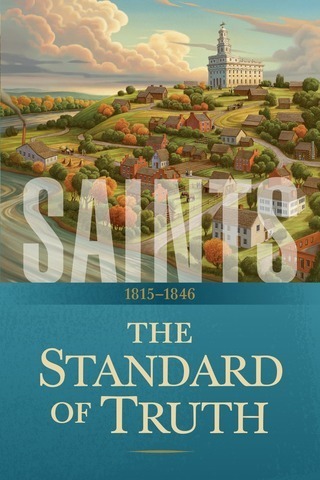