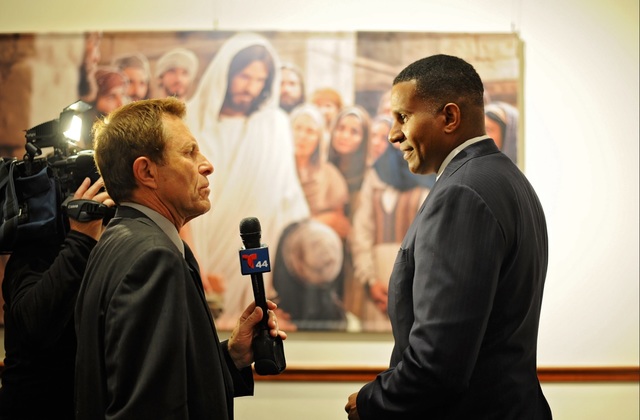 I’ve always loved the news and I’ve attended many press conferences as a speaker, guest, or writer on topics from politics to public policy to entertainment. So when I was asked to attend this week’s Washington D.C. Temple renovation press conference at the adjacent visitors’ center in Kensington, Maryland, I thought it would feel like any other media event. 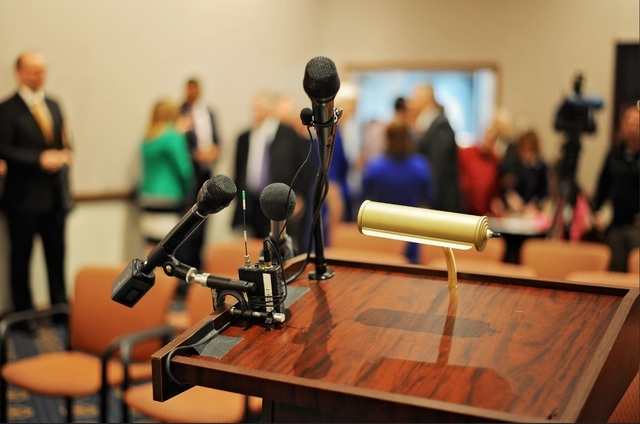 Reporters fire off questions while speakers hit what they can and avoid everything else like a batter bends around a wild pitch.

Sure, all the bases were covered. The temple opened in 1974, it’s covered in Alabama white marble, it needs some tender loving care, and the Church will host a public open house when it’s complete sometime in 2020.

Several project leaders made statements and a media-savvy local church member, Jessica “Jet” Moody, ran the event wearing her hat as assistant director of public affairs for the Church for the North America northeast area. My wife, a photographer, volunteered her time and scurried around getting her shots as she would at any gig. There were badges, sign-in sheets, and glossy handouts for reporters. 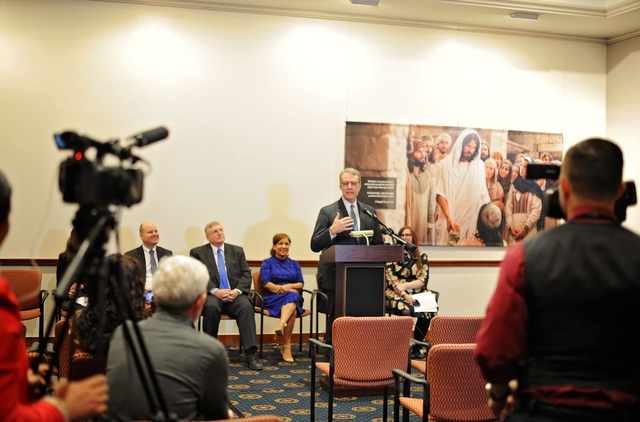 No, the differences in this experience weren’t fun facts you might pick up in a broadcasting or media relations class.

The difference in this event came down to one thing: the undeniable influence of the Spirit.

While some may have left with just the facts about materials, site plans, and landscaping, the most important message from every speaker was that this isn’t just a building and it sure as heaven isn’t just a construction project. It’s a place of worship, the House of the Lord. 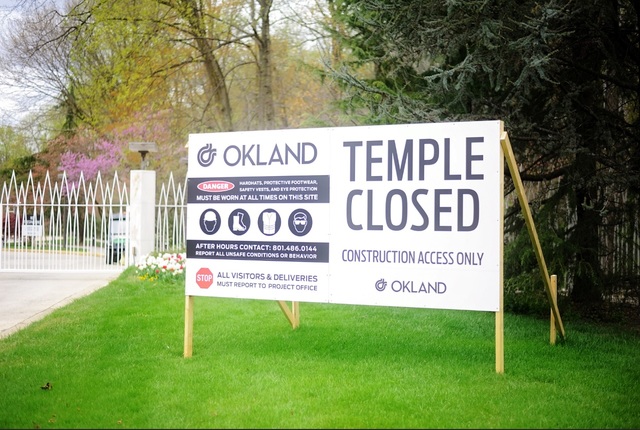 Elder Kevin E. Calderwood, an Area Seventy based in northern Virginia, spoke first and set the tone. While acknowledging the popularity of the temple in the region and the stunning view it offers drivers on the famed Capital Beltway, he pivoted quickly to what matters most. “You see (the temple) almost floating above the trees, and so certainly we see it as iconic from that standpoint. But for us it’s more sacred; it’s a sacred place where we can participate in ordinances that bind our family together.”

To journalists eager to know the nuts and bolts of the two-year project, Elder Calderwood concluded with these inspired words. “The temple is a monument to the Savior Jesus Christ, whom we love and whom we worship.” Then he closed his remarks in the Savior’s name and with a humble, “Amen” — surely a rarity for press conferences held anywhere near D.C.

Later, project manager John Stoddard confirmed that the temple would remain lit during construction and visible to millions of motorists. Then he also taught doctrine. “Light is very important in our worship. When we see that temple in the midst of darkness and it shines up, it reminds us that God is still here, and we have that to look forward to. It strengthens us.”

A woman from Peru and a bishop from a young single adult ward also spoke, but they weren’t invited to impress the media or break flashy news. They were there testify of the power of the temple they will deeply miss during its closure.

After the more formal event concluded, members of the press and speakers walked through the construction fences and toward the front of the temple. Seeing trailers in the parking lot and dumpsters at the front doors should have been disconcerting, but the Spirit reminded us that while it’s odd to see plywood covering the front doors of the Lord’s House, all things are spiritual unto Him. 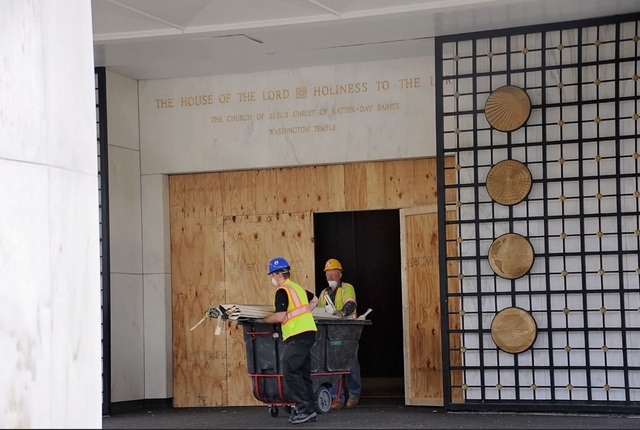 As the event wrapped, I asked Roger Hansen, the project’s lead architect with Salt Lake City-based CRSA Architecture, a few questions about timing, schedule, and logistics. With a knowing smile, he offered the most important takeaway from the day: “The whole reason that we do this, and the whole reason that the Church expends both financial resources and personnel on projects like this is for the patrons and for the people who use the temple. We care so much that it’s a place that people can come and feel the Spirit without distractions. … (T)he environment we create can enhance that feeling of peace and let individuals enjoy that time with the Savior. That’s what we’re trying to accomplish, and yes it’s through building, but it’s not about the building.”

And there it was. Millions of dollars will be spent refurbishing a temple that’s towered over our nation’s capital for more than four decades, just as money will be spent and nails pounded to build future temples in places like Richmond, Rio and Russia.

But as beautiful and architecturally impressive as they’ll be, it won’t be about the buildings — it will be about the Savior and our ability to draw close to Him in the most sacred places on earth.

All images by Kodi Wright from kodiwrightphotography.com