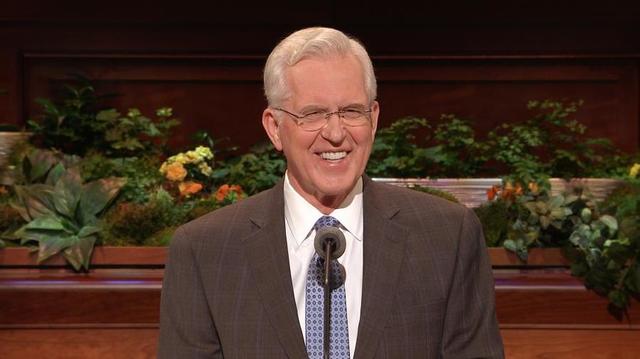 Now that the shock factor of so many changes announced in one short conference weekend has begun to fade, I've dived back into general conference, listening to each talk and searching for key messages and takeaways I might have missed in the initial excitement.

One message, in particular, stood out to me as I listened to Elder D. Todd Christofferson explain the changes relating to high priests joining elders quorums: "Brethren, I devoutly hope that we will no longer speak in terms of being 'advanced' to another office in the Melchizedek Priesthood."

The Church Handbook 2 and other Church literature speak of "conferring the priesthood" and "ordaining to an office." Though these differences might seem subtle initially, the message they communicate is infinitely important to men and women.

A member's standing in the Church is not dependent on their calling but on their willingness and desire to do the Lord's work, no matter what that calling or office might be. As President Russell M. Nelson shared in a stake conference shortly after being sustained as our prophet, “I’ve concluded it really doesn’t matter much what your calling is in the Church, as long as you are doing it well. Your work and your calling are just as important as my work and my calling."

Elder Christofferson in his talk quotes President Boyd K. Packer, saying, “The priesthood is greater than any of its offices. … The priesthood is not divisible. An elder holds as much priesthood as an Apostle. (See D&C 20:38.) When a man [has the priesthood conferred upon him], he receives all of it. However, there are offices within the priesthood—divisions of authority and responsibility. … Sometimes one office is spoken of as being ‘higher than’ or ‘lower than’ another office. Rather than ‘higher’ or ‘lower,’ offices in the Melchizedek Priesthood represent different areas of service.”

Because we often use the term "priesthood" in the Church to mean several different things (the power of God, the power God has allocated to men to act in ordinances necessary for salvation, and the men who hold the priesthood), Church members are often confused when we speak about this topic. But about one thing we should never be confused: the power of the priesthood is God's power, not man's. As Elder and Sister Renlund explain in The Melchizedek Priesthood, "God holds unlimited, unbounded, and unending power and authority. . . . All blessings come from God's total priesthood power and authority."

While God has granted a portion of his power to righteous priesthood holders, that power is realized and accessed only in the work of salvation and blessing others. In short, the priesthood cannot be accessed by one man alone. It is something that requires unity. It is a power that requires high priests, elders, sisters, and children working together to uplift one another, accomplish God's work, and help us access the eternal life made possible through Jesus Christ and our Heavenly Parents.

Learn more about the priesthood in The Melchizedek Priesthood: Understanding the Doctrine, Living the Principles.

The concept of priesthood in The Church of Jesus Christ of Latter-day Saints is unique. A portion of God's power is delegated to "individuals who He knows perfectly well are imperfect." How does that work? As authors Dale and Ruth Renlund ask, "How is it conceivable that His awesome, delicate power could be used by both an illiterate farmer and a rocket scientist—to equal effect—in the salvation of humankind?"

This helpful book "has arisen in large part from questions we have asked each other over the years," write Elder and Sister Renlund. "The quest for an understanding of the priesthood and its proper application has continued through our respective medical and legal training and our careers outside of the home. A fuller understanding and application of the priesthood power has required both of us to work together inside our home."