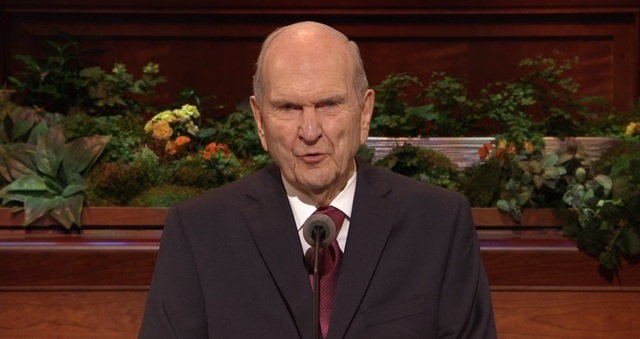 The Only Speculation We Should Seriously Consider This Conference

There’s an electric, almost tangible buzz in the air around this time of year that settles over Temple Square and Latter-day Saint chapels throughout the world—and it has nothing to do with changing weather. It’s general conference time.

Since President Nelson has become our prophet and plunged the Church and its members into a thrilling set of adjustments, invitations, changes, challenges, blessings, and promises as we move the Lord’s work forward together, I’ve noted that the excitement around general conference has reached a new frenzy.

I love this enthusiastic anticipation. I love the increased focus on general conference—this communal gathering of the Saints worldwide as we feast together on messages of peace, love, hope, and the Atonement of our Savior Jesus Christ. I love the soul-stretching inspiration that comes from each message. Why shouldn’t we be excited at conference time?

But with this increased excitement, I’ve also noticed floods of articles, messages, tweets, and conversations filling my feeds, inboxes, and neighborhoods eagerly anticipating what’s coming next. And while there is nothing wrong with wondering and looking forward to conference and all it might bring, I sometimes wonder if we are treating general conference more like the Super Bowl than a sacred event. Are we so busy laying out check lists of predictions that we forget to prepare for the spiritual aspects of the weekend? Are we allowing our laundry list of wants or speculation to overshadow what the Lord wants us to hear? If so, we are setting ourselves up for disappointment and for a lack-luster weekend.

As in any relationship, setting far-fetched expectations for others to fulfill is not fair to your loved one or yourself—and that principle still holds true with God. He knows what is best for our Church. He knows how to reveal the changes that need to be made and when we will be ready. He loves us unconditionally and can accomplish infinitely more than we can fathom if we allow Him to work through us. But we must be ready. And we must be prepared to be surprised.

The personal revelation we receive during general conference can be just as if not more intensely life-changing than new programs or policies announced. But we also know much lies in store for the future of our Church. As President Nelson said during his recent Latin America Ministry Tour, “This work is moving forward at an accelerated pace. I can hardly wait to bounce out of bed each morning and see what the day will bring. . . . There are exciting things ahead.” During an earlier world ministry tour, President Nelson stated emphatically, "If you think the Church has been fully restored, you're just seeing the beginning. . . . Eat your vitamin pills. Get some rest. It's going to be exciting."

I have a theory about President Nelson: I think our prophet sees farther ahead than any of us could ever possibly imagine. From reading the descriptions of the sacred revelations he receives, I have a hunch that he knows many changes and truths yet to be revealed in the Church, but he is waiting on us to be ready. And he is waiting on the Lord to know the right time and place to reveal what lies ahead.

About the Prophet Joseph Smith, President Heber C. Kimball expressed that “the greatest torment [the Prophet Joseph] had and the greatest mental suffering was because this people would not live up to their privileges. . . . He said sometimes that he felt . . . as though he were pent up in an acorn shell, and all because the people . . . would not prepare themselves to receive the rich treasures of wisdom and knowledge that he had to impart. He could have revealed a great many things to us if we had been ready; but he said there were many things that we could not receive because we lacked that diligence . . . necessary to entitle us to those choice things of the kingdom” (Journal of Discourses (London: Latter-day Saints’ Book Depot, 1865), 10:167). I often wonder if President Nelson feels the same way.

During his first general conference address as prophet, President Nelson stated, "There is so much more that your Heavenly Father wants you to know.” He then quoted Elder Neal A. Maxwell, saying, "God is giving away the spiritual secrets of the universe, but are we listening?"

So, ask yourself, are you listening? Are you preparing yourself mentally and spiritually for the changes that lie ahead?

I’ll be the first to admit that I don’t know the limits to my own faith and I don’t know if I’ll be prepared for the glorious, divine truths God might reveal this week or even years in the future, but I want to be. I’m trying. And I know God has much in store for me.

So the only speculation I ever seriously consider as a new general conference approaches is this: Am I truly ready to do what the Lord will ask of me? Is my faith strong enough to hear and take into my life all of the words shared by our Church leaders, not just the select few I like or that seem easy? Will I be ready when changes come and sacrifice is required?

I’m still seeking the answer to those questions for myself, but I hope that answer will be clear and as unshakable as my faith when the time comes.