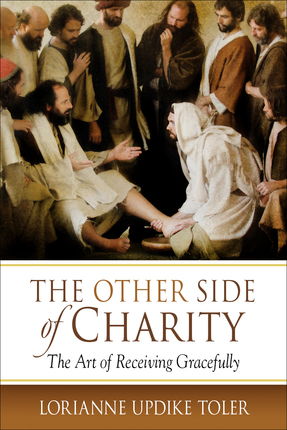 The Other Side of Charity: The Art of Receiving Gracefully

During my thirty-three years, I have had a lot of time to think about charitable receiving due to surprisingly frequent circumstances requiring dependency that dot my life.

As a teenager, I contracted strep throat and one of its evil aftereffects, for which antibiotics are designed to prevent, post-streptococcal glomerulonephritis. Along with making me very ill, from this I experienced my first episode of a mysterious walking disorder. This disorder would plague me in inconvenient episodes over the next eleven years. During these episodes, I was served by parents, siblings, friends, roommates, classmates, employees, and dedicated Relief Society sisters. Often, I was bed—or wheelchair—bound. The termination of the episodes was always uncertain and, if I went back to full speed too soon, my legs would go—again—as quickly as they had returned.

Other lessons were more heart-gutting than physically frustrating. In my second semester of law school (2003), my beautiful, poetic sister Elisabeth (Betsy) died of carbon monoxide poisoning from a faulty furnace in her apartment. Then toward the end of my third and last year of law school in 2005, my parents divorced. Finally, almost a year later to the day, my gregarious, bodybuilder brother, John Robert, died when his car went off a cliff on Highway 1 just a few miles north of the Golden Gate Bridge in California. It is impossible here to convey the terrible anguish that I felt and still feel from these losses.

Through each tragedy, I was sustained by service in various forms, the most potent of which was prayer. Yet although the service rendered at each loss of legs or family helped me physically and emotionally, I did not allow this service to penetrate my spirit and sanctify me. As an adopted mother once told me, I had taken but not received.

The difference is spiritual. Just as one might perform service without being charitable, I had accepted service without being charitable. Worse, with every new act of service rendered me, the guilt and presumed debts I had incurred mounted steadily. No matter how many thank-you notes I wrote or how much I committed to serve my companions, roommates, friends, or ward in return, I felt I would never balance the service ledger.

As it has been for me, receiving charity is often much more difficult for members of The Church of Jesus Christ of Latter-day Saints to allow and to have. The word charity often conjures visions of baking casseroles, making a quilt, or preparing personal hygiene kits for refugees in a cultural hall assembly line. Most of us remember Paul telling us that this action-charity is “sounding brass” (1 Corinthians 13:1) if done without the corresponding feeling-charity. This means acting in charity, without feeling charitable, may sound or look admirable, but is yet empty and hollow. Charity also avails us nothing in our spiritual quest to return to the Savior unless it is done with pure intent.

So it is also with receiving casseroles, quilts, or hygiene kits. Although we can go through the motions of graciousness and even feel real gratitude for such gifts, unless we charitably open our hearts to the gifts and their givers to receive them, we accomplish “nothing” in allowing the experience to draw us closer to the Savior (1 Corinthians 13:2).

There are two halves to charity. One inspires us to give with our hearts instead of our heads. It has motivated Church members to heroic acts in the face of tragedy: in the wake of Hurricane Katrina, it prompted members to open chapels as homes for the dispossessed. After World War II, it prompted the leadership of the Church to distribute food to the war-torn German people, most recently known as the enemy. And after the 2004 tsunami devastated much of Southeast Asia, the Church readily provided the item which locals most requested—Korans. These acts represent true charity.

Yet there is another half of charity, a side that is much neglected. One cannot complete the gift that charity inspires without a receiver. This side, too, is all-important, for in learning to receive properly, we reach new depths of love for our fellow man and learn to become more Christlike.

Christ performed many acts of kindness, the greatest of which happened in the Garden and on the cross as He suffered for our sins and sicknesses. But Christ was also the perfect receiver.

It becomes hard to discern where one half of charity ends and where the other begins, a common occurrence for those with true charity. Yet we see Christ continually choosing reliance on the grace and kindness of others. We see at least two accounts in the scriptures of His feet being anointed and washed—once at great expense—and He suffered it (see Luke 7:38; John 12:3–8). Christ had no home, but He received both board and bed as a perpetual guest (see Luke 9:58). Even his tomb was borrowed (see Matthew 27:57–60). He was Lord and Master of all, yet created opportunities for others to benefit through serving Him, and to learn the art of receiving charitably Himself. The Savior set an example for us in receiving, and we would be wise to follow.

Receiving helps to produce greater love in us and strengthens our relationships—with each other and with God our Father and His Son. Love begets love. Love received within the bonds of charity produces greater charity within ourselves, and inspires us to greater heights and depths in the gospel.

To learn more about the five keys to receiving charity more gracefully, be sure to read the eBook The Other Side of Charity by Lorianne Updike Toler.