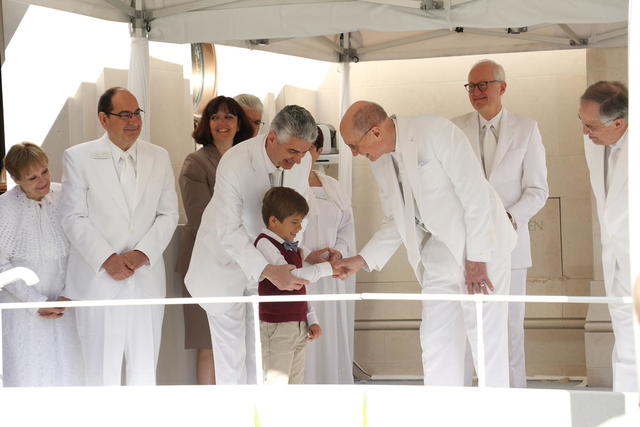 The Paris France Temple "Will Lead to Other Temples," President Eyring Says at Dedication

In an area of France famous for its beauty, President Henry B. Eyring of the LDS Church's First Presidency dedicated a new temple on Sunday morning.

The Paris France Temple is the first in France and 156th worldwide for The Church of Jesus Christ of Latter-day Saints.

Within walking distance of the entrance to the gardens of the Versailles Palace — the Sun King’s royal chateau — the temple stands in a prominent, “royal location,” said LDS Church Presiding Bishop Gérald Caussé.

“The temple is only a few hundred yards from the remarkable Chateau of Versailles, which was transformed by King Louis XIV and his family into an extravagant complex, complete with French and English gardens,” said Elder Neil L. Andersen of the LDS Church’s Quorum of the Twelve Apostles, who also participated in the dedication. “While the chateau is impressive, its influence dissipated with the death of the Sun King and those who followed him.”

In contrast, the Paris Temple will have a worldwide, eternal impact, especially among French-speaking populations, President Eyring said. “It will be powerful. It will lead to other temples.”