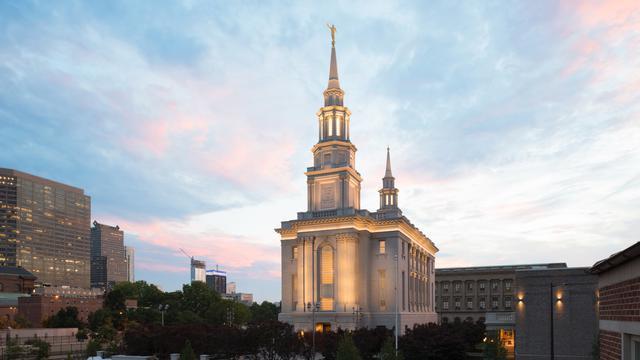 "We believe our temples to be the house of the Lord," Elder Larry Y. Wilson, executive director of temple development, told the media who gathered to tour the new Philadelphia Temple.

"So they are built of the finest materials, with the finest craftsmanship, to stand forever," he said.

With the open house for the Philadelphia Temple beginning August 10, the unique features of this house of the Lord have been drawing the attention of many.

Upon walking into the temple and spotting an original painting of the signing of the Constitution with Benjamin Franklin featured in the foreground, visitors can immediately see why this temple is so unique.

► You'll also like: First Official Photos Inside the Philadelphia Temple

"We believe the hand of God was very much manifest in the events of 1776," said Wilson. Those events helped set a foundation of religious freedom that allowed the gospel to be restored and flourish in the United States and around the world. That significant history is reflected in the brass and crystal chandeliers and the furniture that are fashioned after those found in Independence Hall and Christ Church.

The Philadelphia Inquirer recently highlighted these beautiful features in an article that explained LDS beliefs and the significance of temples. Overall, the sentiment of the article remains respectful and even praising of the experience of learning about an LDS temple.

Here are some highlights from the article:

In the baptistery—where Mormons in good standing may baptize their non-Mormon ancestors into the faith—the large baptismal font resting atop 12 full-size carved oxen is surrounded by a sweeping mural of Smith being baptized in the Susquehanna.

"I don't know of any other temple that depicts Joseph Smith's baptism," said Wilson. . . .

The grandest room of all, on the third floor, is the "celestial room." Flooded with natural light from a giant paneled window and the lantern of its high domed ceiling, it also features an enormous crystal chandelier under which visitors may sit in chairs or on sofas to meditate.

Calling it "a place of obvious beauty," Wilson described it as the "culminating point" of the temple, where the devout are invited to sense that "they have been admitted to the presence of God."

But the fourth and topmost floor contains what may be this building's—and Mormonism's—most potent expression of belief.

In the "sealing rooms" where bride and groom exchange vows (the church does not conduct same-sex rites), they rise from the low altar to see themselves reflected and re-reflected unto infinity in mirrors set on opposite walls.

It is a conscious metaphor for the eternity of togetherness that the rapidly growing faith offers its 15 million members, who are taught they not only lived with God before they were born but may ultimately become the god of their own divine realm.