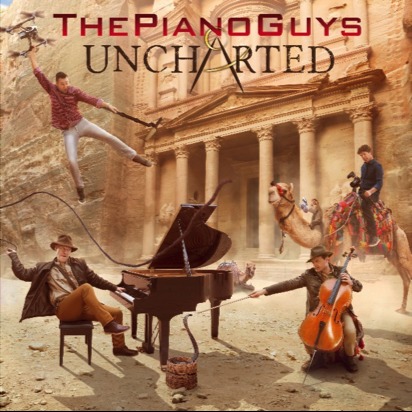 With over a billion YouTube views of their more than 50 music videos, The Piano Guys announce the release of their new album Uncharted (Portrait). Released on October 28, it includes the upbeat new song “Okay” written by hit-makers Andy Grammer and Dave Bassett. The “Okay” music video is on YouTube now—check it out here—as well as the music video for their cover of Justin Timberlake’s hit “Can’t Stop The Music”—view it here.

Uncharted literally charts new territory for The Piano Guys. Continuing their “Wonders of the World” quest, they’ve shot three of their recent hit videos far afield—in Scotland, Mexico, Jordan—and “Okay” shows them in the recording studio where they create their inspirational music, and in front of a cheering crowd of 20,000 at the USANA Amphitheatre in their home state of Utah.

Uncharted features all their recent hits, including “Fight Song/Amazing Grace” (video filmed in Scotland), “A Sky Full of Stars,” “Hello/Lacrimosa,” “Jungle Book/Sarabande” (video shot in Chichén Itzá, Mexico), and “Indiana Jones and the Arabian Nights” (video filmed in Petra, Jordan), all available for the first time on CD. The Deluxe Edition includes a DVD featuring all of those recent hit music videos.

The Piano Guys weave their magic from a cornucopia of musical sources. Fusing pop hits from the likes of Justin Timberlake, Adele, Coldplay and Rachel Platten with Hollywood scores from legendary masters like John Williams and Hans Zimmer; timeless classical pieces from Mozart, Händel and Rimsky-Korsakov; and their own original compositions, emerging with a tapestry of inventive, inspiring songs with multigenerational appeal.

“We’ve now ventured deeper into “uncharted” territory than we could have ever dreamed of traversing,” says Steven Sharp Nelson, the group’s cellist, explaining both the album’s title and the band’s ongoing fan-fueled journey. It’s not just the far-flung video locations; the music itself isn’t limited to any one genre or chart. “We hope it transcends conventional classification and instead reaches beyond boundaries, finding audiences from all walks of life that want positive content and fresh takes on old and new music,” Nelson says. “Also, it’s actually very difficult to accurately ‘chart’ our music into sheet music since it features so many unprecedented and untranscribable sounds. Combine all of these elements with more of our signature fusion of film score, classical music, pop and original music, our first vocal single, and even more groundbreaking textures and sounds, we believe this to be our best record yet. We can’t wait for people to hear it!”

► You'll also like: 9 Mormon YouTubers with Millions of Followers

The Piano Guys—Steven Sharp Nelson, Jon Schmidt, Al Van der Beek and Paul Anderson—became an online sensation by way of their immensely successful series of strikingly original self-made music videos, which recently surpassed 1 billion views and garnered over 5 million subscribers on YouTube. The band has played sold-out concerts around the world, accrued a massive social media following, topped the Billboard charts, and made over 50 music videos since 2011, including their breakout hit, an innovative multi-handed version of One Direction’s “What Makes You Beautiful,” and a gorgeous reinvention of the hit song “Let It Go” from Disney’s Frozen. Uncharted is the four Utah dads’ sixth major label album on Portrait/Sony Music Masterworks. It follows Wonders,The Piano Guys, The Piano Guys 2, a holiday album called A Family Christmas, and most recently The Piano Guys—Live!, featuring live music from their sold out Red Rocks and Carnegie Hall concerts. Uncharted is available physically and digitally now. 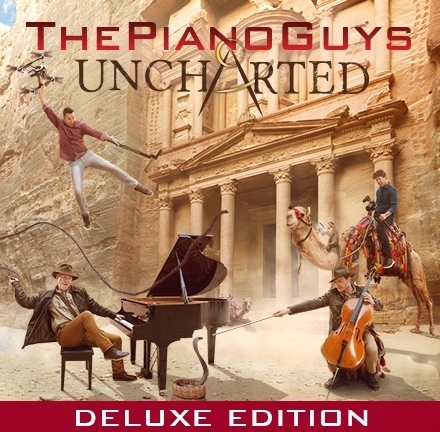 Check out the brand new CD Uncharted or get ready for the holidays with The Piano Guys: A Family Christmas.