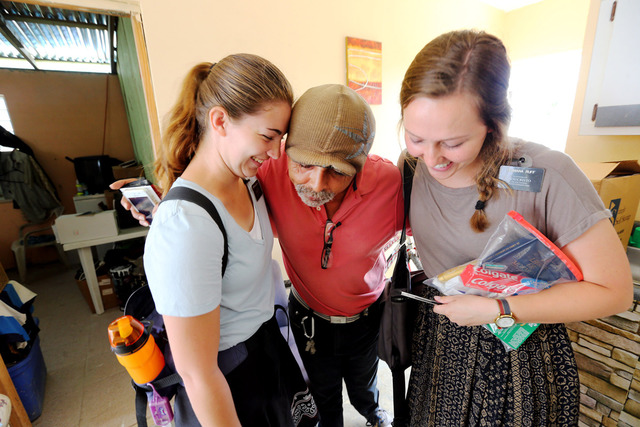 For eight days, 155 missionaries huddled together in an LDS meetinghouse concerned only with survival after Hurricane Maria ripped through Puerto Rico. But all of the missionaries were together and prepared, thanks to the inspiration President David H. Smart and his wife, Sister Brenda Smart, received.

Puerto Rico suffered through two hurricanes. On Sept. 6, Hurricane Irma skirted just to the north en route to pummeling Florida, with the San Juan missionaries told to hunker down in their apartments, keeping 72-hour kits nearby. Besides many being left among the 1 million without electricity, they were relatively unscathed, with normal routines resuming and the Smarts welcoming new missionaries a week later.

With Hurricane Maria targeting the island the following week, the Smarts woke up the day before its arrival with a singular impression: “Bring them home.” They called all missionaries to central San Juan — the 100 elders to the meetinghouse and the 55 sisters to the mission home — telling them to bring their 72-hour kits, a small suitcase or backpack with a change of clothes and their scriptures, journals and study materials.

The next day, on Sept. 20, Maria hit with its 155 mph winds, flash floods and storm surges, doubling as the 10th-worst Atlantic hurricane ever and Puerto’s Rico’s worst natural disaster on record. The storm paralyzed the U.S. island territory with 64 deaths, indescribable damage and debris and absolutely no electrical power.

“When the water and winds came,” said Elder Chandler Barker of Evanston, Wyoming, a first-week missionary weathering the storm in the meetinghouse, “it was like we were in a scripture story, and we really came together in mighty prayer.”