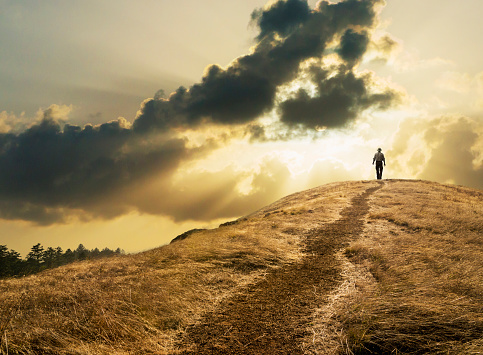 Even though he died when I was just 10 years old, Melvin J. Ballard has been a major influence in my life. For as long as I can remember I have heard my family talk about his love for the Lord and his unwavering devotion to the Church. He spent his entire life building on the "sure foundation" of which Helaman spoke, and I'm not aware of any "shafts in the whirlwind" that were able to penetrate his faith and testimony. In fact, my personal quest for knowledge of the Savior was motivated to a great degree by Grandfather Ballard's account of one of his most sacred experiences.

While he was serving a mission among American Indians in the Northwest, my grandfather faced a time of incredible struggle. There were unprecedented—and seemingly insurmountable—challenges for the Church there, and my grandfather literally spent hours on his knees asking for guidance and inspiration. During one such period, when all seemed bleak and utterly hopeless, grandfather received, in his words, "a wonderful manifestation and impression which has never left me.

A Witness That He Lives

"I was told there was a [great] privilege that was to be mine," he recorded. "I was led into a room where I was informed I was to meet someone. As I entered the room I saw, seated on a raised platform, the most glorious being I have ever conceived of, and was taken forward to be introduced to Him. As I approached He smiled, called my name, and stretched out His hands toward me. If I live to be a million years old I shall never forget that smile.

"He put His arms around me and kissed me, as He took me into His bosom, and He blessed me until my whole being was thrilled. As He finished I fell at His feet, and there saw the marks of the nails; and as I kissed them, with deep joy swelling through my whole being, I felt that I was in heaven indeed.

"The feeling that came to my heart then was: Oh! if I could live worthy, though it would require four-score years, so that in the end when I have finished I could go into His presence and receive the feeling that I then had in His presence, I would give everything that I am and ever hope to be!"

Grandfather concluded: "I know—as I know that I live—that He lives. That is my testimony." (Melvin J. Ballard— Crusader for Righteousness, Salt Lake City: Bookcraft, 1966.)

That experience infused my grandfather with the comfort, determination, and spiritual energy he needed to deal with the problems he was encountering on his mission. In fact, the day after he received that manifestation, he joined one of his fellow missionaries, W. Leo Isgren, in visiting a well-to-do merchant in Helena, Montana. Some years later, Brother Isgren told me how he and my grandfather had stood together in front of a life-sized portrait of Jesus Christ that was prominently displayed in the merchant's home. At length, grandfather turned to Brother Isgren.

"I was filled so much with a sacred feeling that I could say nothing," Brother Isgren told me. "After we left the home and were on our way to our next appointment, Brother Ballard stopped me and said, 'Brother Isgren, I suppose you were somewhat startled at my words regarding the Savior of the world.' I told him that, yes, indeed, I had been—very much so. And then and there firsthand he told me of his experience the previous evening."

While we may not all have experiences of that same magnitude or intensity, the essence of our ministry in The Church of Jesus Christ of Latter-day Saints is to invite all people everywhere to "come unto Christ" so that He can work His miracle in their lives in whatever way He chooses. For some, that miracle will mean a significant change of life and lifestyle. For others it will simply mean new purpose and understanding in lives that are already rich with faith. But for all it will mean peace and joy and happiness beyond measure as the Master touches hearts and souls with His love.

Our Search for Happiness

In this, the most recent addition to the approved missionary personal library, Elder M. Russell Ballard explains the Church and LDS beliefs in a clear and inoffensive way. Elder Ballard discusses the Apostasy, the need for the Restoration, the Book of Mormon, the priesthood, the plan of salvation, the Articles of Faith, the Word of Wisdom, temples, missionary work, and benefits of living the gospel. Through personal experiences, he reveals how the gospel has benefited him and concludes by bearing his testimony.