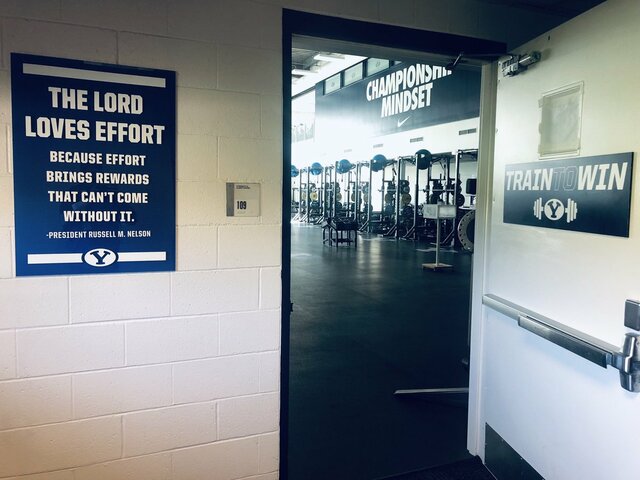 A new addition to the entrance of the strength and conditioning weight room in the BYU Student-Athlete Building welcomes its entrants with an inspiring message from none other than President Russell M. Nelson.

Billy Nixon, BYU’s new director of player experience and equipment operations, shared a photo of the new sign earlier this week, which reads, “The Lord loves effort because effort brings rewards that can’t come without it.”

The quote comes from a story that Sister Joy D. Jones shared in April 2020 general conference the session before her release as Primary General President. In her talk, “An Especially Noble Calling,” Sister Jones relayed a story of a young girl named Pearl asking President Nelson, “Is it hard to be a prophet? Are you, like, really busy?” to which he responded:

“Of course it’s hard. Everything to do with becoming more like the Savior is difficult. For example, when God wanted to give the Ten Commandments to Moses, where did He tell Moses to go? Up on top of a mountain, on the top of Mount Sinai. So Moses had to walk all the way up to the top of that mountain to get the Ten Commandments. Now, Heavenly Father could have said, ‘Moses, you start there, and I’ll start here, and I’ll meet you halfway.’ No, the Lord loves effort, because effort brings rewards that can’t come without it.”

Since the weight room is a second home for many student athletes­—especially football players—the uplifting message from President Nelson is sure to inspire and leave a lasting impact on many of these players and influence their performance on and off the field.

Other inspiring signs in the weight room include phrases like “Championship mindset,” “Train to win,” and a quote from legendary head coach LaVell Edwards: “The will to prepare is more important than the will to win.”