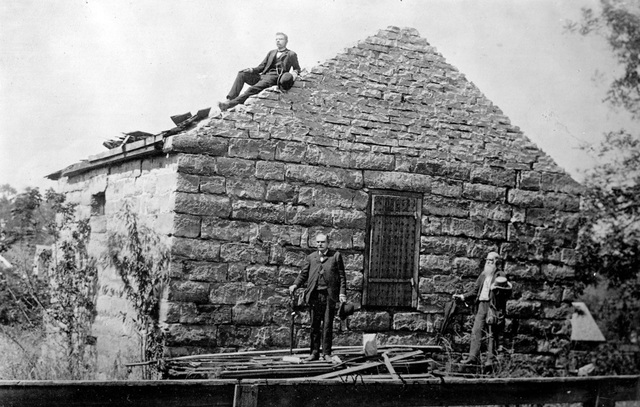 In addition to the LDS Perspectives Podcast, here are five little-known facts about the Prophet’s time in Liberty Jail.

1. “Liberty Jail” is not its official name.

When Missouri officials ordered that Joseph Smith and five other Latter-day Saint men be held without bail, based on charges of having allegedly committed treason during the recent conflict known as the “Mormon War” in Missouri, they were sent to the Clay County jail located in Liberty, the seat of Clay County. Even at the time, the building was nicknamed “Liberty Jail,” but even so, it was a county, not a city, prison. The nickname nevertheless remains ingrained in LDS culture and that is unlikely to change.

2. The prisoners almost certainly did not need to stoop in the dungeon.

Joseph Smith and his fellowprisoners spent more than four months in the jail during winter 1838–1839, much of it in the lower-level dungeon. Four-foot thick walls made of heavy timber and stone separated them from the outside world. A trap door served as the entrance to the lower chamber, while two narrow slits in the walls provided the only natural light. Architectural plans for the original jail have not survived, but in the 1880s Latter-day Saint historian Andrew Jenson visited the decrepit Clay County jail and concluded that the dungeon was about six-and-a-half feet from floor to ceiling, providing sufficient space for Joseph and others to stand upright. Fellow prisoner Alexander McRae, who was reportedly six foot seven, may have had to stoop, but even he did not mention this in his accounts of his experience in the jail. Only much later did the story become prevalent that the prisoners were unable to stand upright while in the dungeon.

3. Friends and family of the prisoners were allowed to visit the jail.

Emma Smith visited Joseph three times prior to her departure for Illinois in mid-February 1839, twice staying overnight in the jail. The wives of the other prisoners likewise visited their husbands. Church leaders such as Edward Partridge and Heber C. Kimball counseled with the brethren in the jail, as did the prisoners’ lawyers. These visits provided much emotional sustenance for the prisoners.

4. Joseph relied on letters to hold the Church together.

Despite physical separation from the Saints during that trying winter of 1838–1839, Joseph depended on letters to maintain family ties and sustain the Church. Joseph believed that it was part of his husbandly duty to write to Emma in his own hand and five surviving letters written to her while he was in Missouri state custody reveal his love and concern for his family. With fellow prisoners Alexander McRae and Caleb Baldwin acting as scribes, Joseph dictated three general epistles to the Church at large that sought to make sense of the recent catastrophe and to interpret the Saints’ afflictions within the long history of God’s suffering people. The prophet’s letters also spoke of receiving new revelations in the wake of their troubles and portions of Joseph’s letters were recorded in the voice of revelation. Church members in Illinois cherished these epistles, as demonstrated by their efforts to share, copy, and eventually published them. In the 1870s, Apostle and Church Historian Orson Pratt chose selections of two of the general epistles for inclusion in the 1876 edition of the Doctrine and Covenants. Documents Volume 6 contains the full text of each of the letters Joseph composed while in Missouri state custody in 1838–1839.

Anxious to join the Saints in their exodus from Missouri, and doubtful that they would receive a fair trial, the prisoners pursued various options to obtain their freedom. In January 1839, a local judge released Sidney Rigdon on bail but kept the other prisoners in the jail. On 7 February 1839, while on the upper level, Hyrum Smith attempted to force his way through the exterior doors, but was quickly apprehended. In early March, the prisoners sought to dig through the dungeon walls. Having succeeded in carving a hole in the timer, they needed only to remove the outer limestone block. When their tool broke, however, they sought outside help and were discovered. Finally, in early April the prisoners were removed from the jail in order to stand trial. They were granted a change of venue, and while en route to another county, the guards allowed the prisoners to escape and take what Hyrum Smith called their “change of venue to the state of Illinois,” where they joined the Saints.

Get more insights into this incredible period of Church history with The Joseph Smith Papers, Documents, Vol. 6: February 1838 - August 1839.

Fearing for his life, Joseph Smith fled Kirtland, Ohio, in January 1838 and traveled hundreds of miles to Far West, Missouri. Over the next year and a half, he sought to establish Far West as a city of Zion with a temple, was involved in armed conflict between the Latter-day Saints and other Missourians, was arrested and imprisoned, escaped custody and fled to Illinois, and helped establish new settlements in Illinois and Iowa Territory for the Saints. These events are covered in this sixth volume of the Documents series of The Joseph Smith Papers.